I'm nearly sure that this is only solvable by replacement of the device but I'd like to vent the issue.

About 9 months ago i got a nice Logitech M705 mouse. which inspired me to add paging via scroll wheel to my mupdf and now i think i wouldn't like it any other way. well, back to the present.

The symptoms are that the left mouse button can't be held down. It'll emit multiple button release and press events when pressed down and more when released. This makes drag and drop impossible. I've opened the mouse and verified that it has the same problem even when the actual button is pressed by hand and that it's not due to any damage nor dirt. What's funny is that the scroll wheel and the right button work as they should producing only one press event when pressed and one release event when released.

Due to that I know that it isn't a problem with anything in my computer as if it was you'd think it would effect the right mouse button too. And it's not a problem with the wireless as the mouse tracks nicely (although it doesn't track as good on worn particle board which is uneven do to water exposure as this Logitech M-UR69 but that's a wired usb mouse).

And I can see the extra button events using xev these only appear when the left button is pressed but not the right for that it gives the perfect response of one press event when pressed and one release event when released.

So if its not my laptop nor the wireless and it doesn't effect the right button or the wheel nor the tracking, it must be that i broke in some weird way the left mouse button's switch.

I did find that some one else had this issue with this mouse:

I've recently encountered problems with the left mouse button not staying closed when I hold it down. Trying to drag things across the screen becomes a major malfunction when the button lets go and I have no idea where the icon was just dropped. Taking the mouse apart and blowing it out thoroughly seemed to resolve the issue but why did I need to do that to a six month old mouse in the first place? And how long before the problem comes back?

That's what made me think that it could have been a dirt issue, but I didn't find that helped.

Well the best way to solve this would be to return the device, as it's supposed to have a 3 year warranty.

The microswitch is obviously damaged and all basic solutions would require you to attempt to modify it or its circuit. From your text, I can't see if it shows multiple clicks when the switch itself is held pressed. If it doesn't, then you could try to solve the problem by adding something between the switch itself and the button which would increase the pressure on the switch, but it won't be a long term solution. In situation such as this, the switch is already sparking too much and the contacts are probably already damaged with tendency to get worse so even if this helps, it won't be a long term solution.

If the switch opens even while held pressed, then a little bit of some sort of contact cleaner could be helpful if there's a way to actually insert it inside the switch, but that could be difficult since most of those switches aren't constructed with ability to be opened in mind.

If you happen to have a similar switch, you could try to replace the whole switch, but then you'd probably lose the warranty, in case something similar happens again.

I had the same problem with the left button of my M705 and it turned out that it was indeed caused by a bad contact in one of the microswitches (an Omron D2FC-F-7N), which contained a copper part that was oxidized. I managed to fix this issue by opening the switch and removing the oxide from the contact pad, here's how to do it: 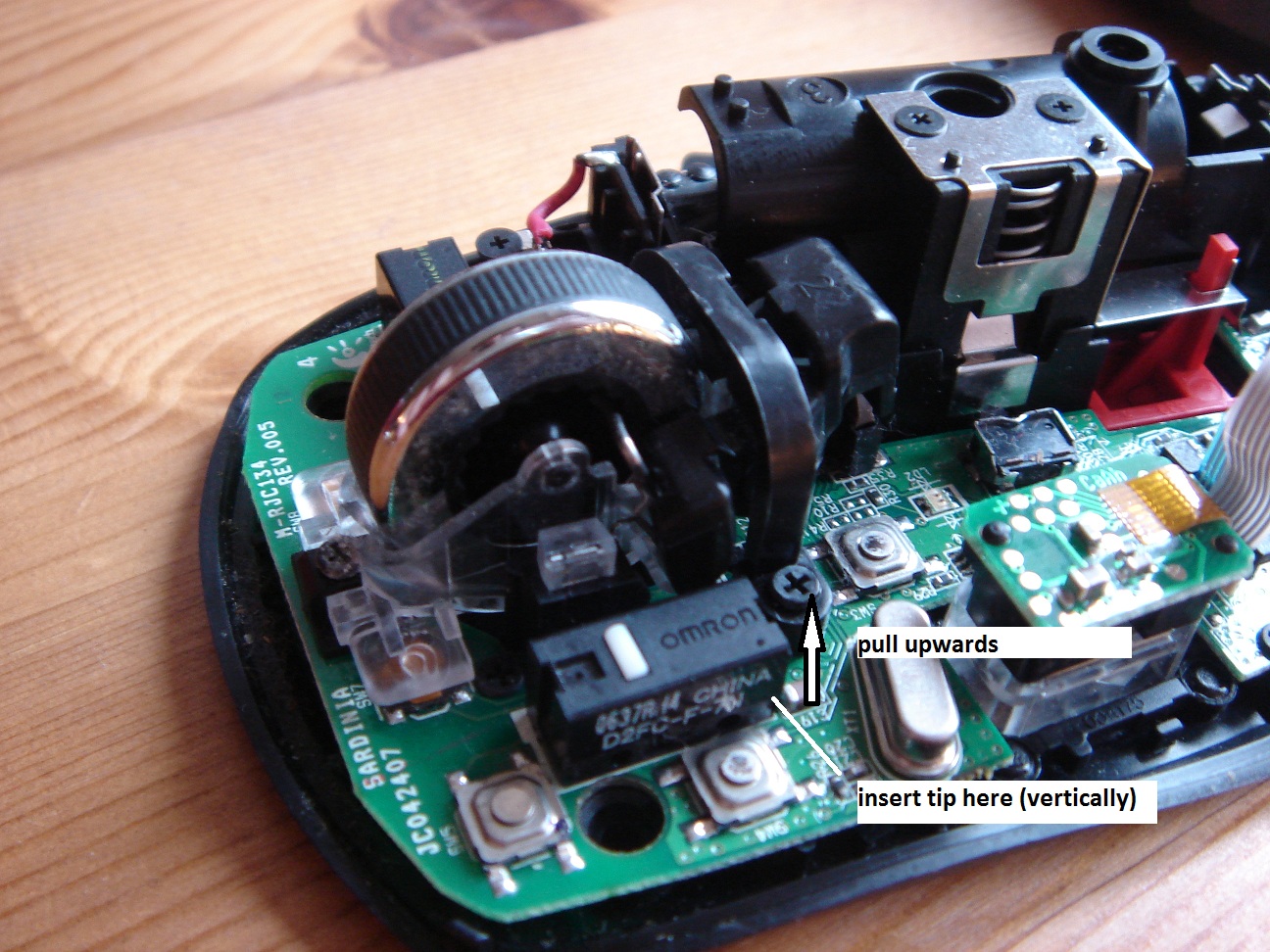 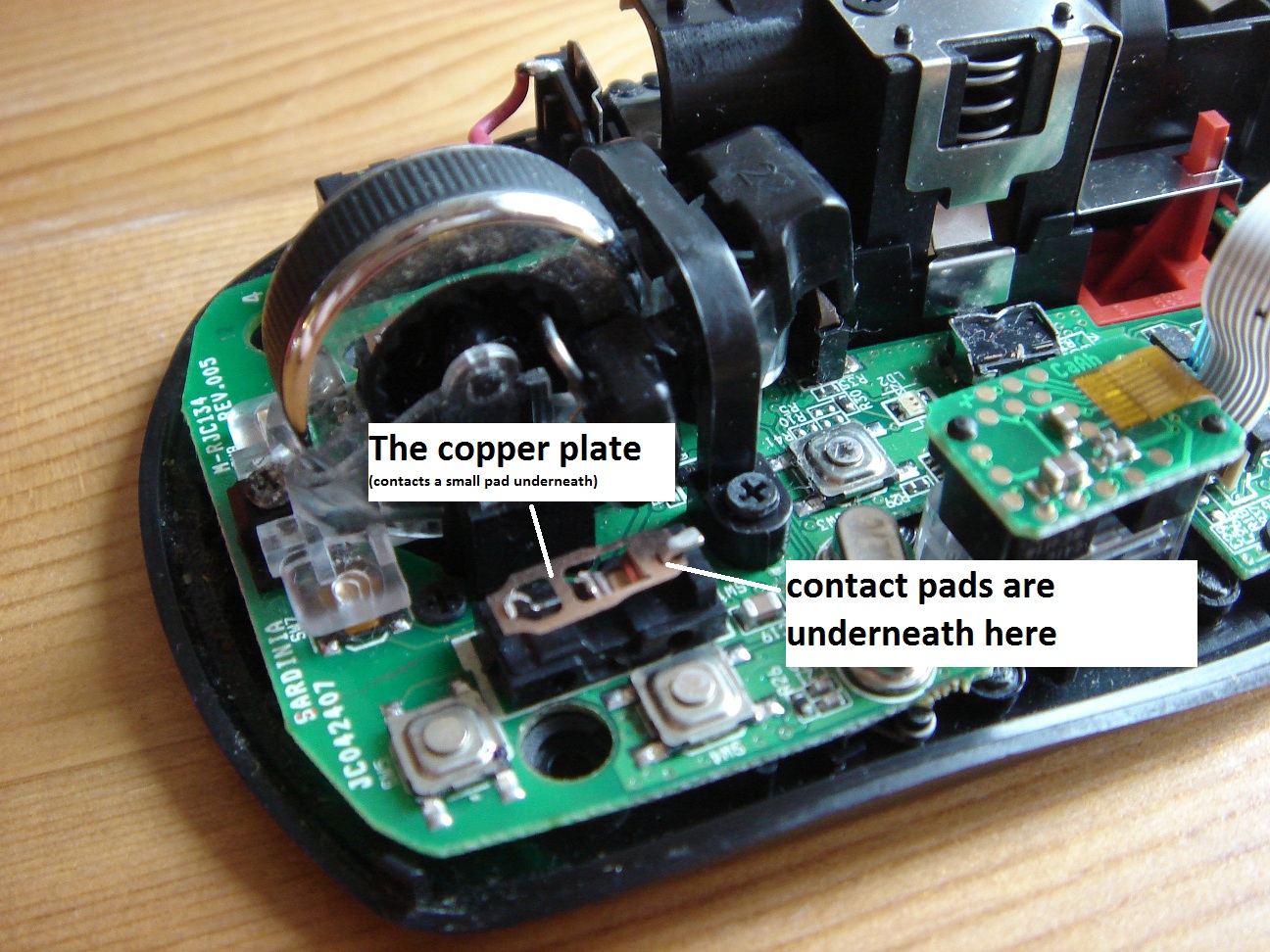 Alternatively you could just replace the whole microswitch by a new one, which should cost less than a few dollars but is much less fun of course ;)

Also, before you jump into repairing your mouse check if it's still under warranty and if so consider having it replaced by Logitech, since opening it up will usually void its warranty.

This procedure should also be applicable to other mice that contain the same microswitch, most notably to Logitech G series, Apple's 3G, 4G, 5G series, some Razer mice and Microsoft's Intellimouse Optical.

Not the answer you're looking for? Browse other questions tagged logitech-mouse or ask your own question.

1
Logitech Trackman “letting go”
6
Logitech M705 Wireless Mouse: Are the batteries dying, or does the device have a hardware failure?

3
Remapping Logitech G5 mouse buttons
7
How do you remap the scroll wheel up and down actions of a Logitech G700 mouse?
4
Logitech mouse m705 misses scrolls
6
Logitech M560 mouse on linux sends messed up input events
0
When I scroll to the top of a page, my mouse scrolls down slightly
3
Usage of Logitech mouse (M705) buttons for navigation in browser on a mac
0
Logitech MX Master Buttons don't work
83
How does a Logitech scroll wheel detect movement?
3
How to make left push of scrollwheel go back a page in Firefox (Logitech M-UAG120 mouse)