How to create a GEM_HOME for rvm?

Let's say, for example, that you are testing two versions of a gem, with ruby 1.9.2-head. You can install one to the default 1.9.2-head, then create a named gemset for the other version, and switch between them easily. Example: testing gems

I have already created

There's something I don't get about the instructions... Please clarify if you can.

What is a Gemset?

I have already created

With this, you installed two Rubies (not Gemsets), namely versions 1.8.7 and 1.9.2. These are (simply speaking) just two versions of the Ruby interpreter/language.

Now, each Ruby version normally has a couple of Gems installed (Rails being one). Think of it as a plug-in. In the normal case, you only have one set of plugins for the Ruby on your system. With RVM however, you can configure it to use multiple "Gemsets" per Ruby version. Thus, you can use multiple Ruby versions (e.g. Ruby 1.8.7 and 1.9.2) and have each of them use different Gemsets.

In your case, maybe you want to have two Gemsets for each of your versions: 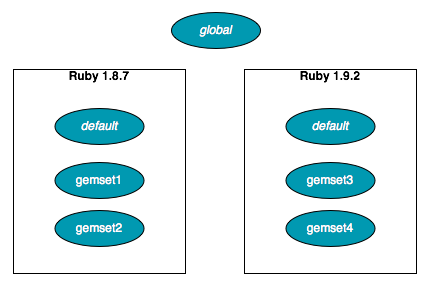 In addition to Gemsets you create, each Ruby also has a "default" Gemsets. This is the one you get when you don't supply any Gemset name while switching. All of them share one "global" Gemset as well.

How do you create a Gemset?

How do you create such a "testing" Gemset?

As per the manual, first, switch to the Ruby version you want to use:

… and then create the Gemset, in your case "testing". The part about GEM_HOME, well, forget it. The manual doesn't mention how to create it. You have to read a bit further down to the example:

Now your Ruby 1.9.2 will have a Gemset called "testing", which you can switch to with

Now, any Gem you install with gem install will reside in this particular Gemset. If you create another Gemset (using rvm gemset create) and switch to that, the previously installed Gem will not be available, as you're working in another Gemset now.

Not the answer you're looking for? Browse other questions tagged ruby rvm rails or ask your own question.

5
Ruby RubyGems: Why do I always get error messages when trying to install gems?
1
Ruby/gem installation paths scattered all over, cause?
0
Redcar Install through RVM
2
Can't find sqlite3 in this ruby/rails version using rvm
0
How to keep gems in sync for two ruby versions?
0
How to get Ruby, when called from a shell script, to see RVM default Ruby
0
gem install won't do anything - Mountain Lion
2
rvm Error running './configure