What angle is optimal for the antennas on my wireless network card?

I'm sharing a house with some friends and I'm in the bedroom right up in the attic. The router is right down on the ground floor and I get connectivity issues.

I've found that if I adjust the two antennas on my network card I can sometimes get a much better signal.

Is there an optimum angle to get the best connection or is it academic? Should they be pointing towards the router? Should they be spread into a V shape or stick out parallel to each other?

Fixed: When you see all the VHF and UHF receivers being used in theatres and DJs and all, for some reason unknown to me, they always use the \ / shape, I assume that helps receive as the signals bounce around so when "line of sight" gets blocked, it still gets there. ))) \__/ ((( Or maybe it works with the ground plane in some way?

Almost always when you're trying to get omni-directionality (((|))) they always go with straight up. Whenever testing any of this stuff, I have found that the most consistent results for omni-directional and movement is straight up. If you have a back ground plane that changes it.

I don't know. I thought I had an epiphany, when I look at a Tesla or large visible electrical output, radio waves in a sense are very tiny powered higher frequency similarities. I could see the Tesla. 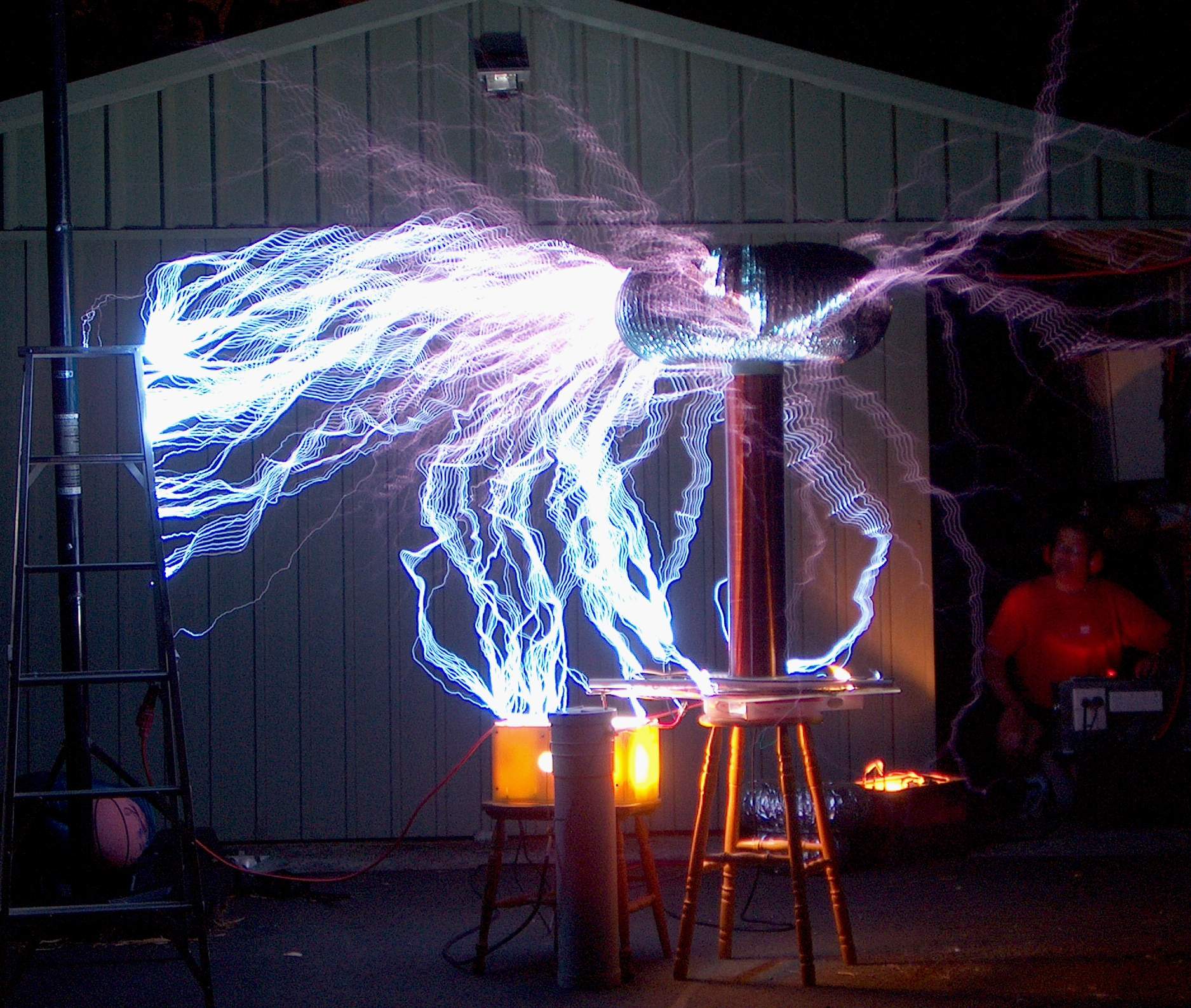 For more epiphanies, it took me days before the light bulb went off that Wi-Fi adapters are not just receivers, they are a transmitter/receiver like the router is.

Radio Technician here. Obviously late, but hope I can help clear up any confusion

Almost any kind of Wi-Fi antenna will be a dipole. Dipole antennas theoretically radiate in a 360 degree disc around the antenna, in other words, a plane perpendicular to the antenna. To help visualize it, think of your antenna like a lighthouse, but shining in all 360 degrees at once.

In the real world, it won't be a flat plane, but instead more of a doughnut shape. The signal will be weaker above and below the plane, especially close to the antenna, but there won't likely be a complete dead zone. With all that said, if you only had one antenna, it would be good to place it perpendicular to your target. If your access point is below you, that would mean placing the antenna parallel the ground.

Enter the second (or more) antennas if you have them. Should that be oriented in the same way to further boost the signal strength? Probably not. Dipoles aren't just directional, they are also polarized. That means, signals will lose power when the transmitting and receiving antennas aren't oriented the same way.

Consider your cell phone's antenna... It is constantly changing orientation. If your transmitting antennas are both oriented the same, the receiving antenna will often be at a bad angle, leading to a lossy connection. If you have your second antenna 90 degrees off of your first antenna, you will greatly improve signal, just based on having appropriate polarization for more incoming signals, including all the reflected and refracted signals. \ / Bunny ears didn't happen by accident .

So in summary, point your first antenna perpendicular to your intended target, or straight up if you just want to cover a flat area like a single floor home. Point your second antenna 90 degrees off that. You can try to be strategic about which of the 360 possible degrees you use for that second antenna, but most of the time it won't matter much, since the bulk of its job is catching mis-polarized signals.

A lot a good info about antenna characteristics can be found here: https://www.cisco.com/c/en/us/support/docs/wireless-mobility/wireless-lan-wlan/82068-omni-vs-direct.html

The optimal angle is the one where you get best reception at all necessary points in your house.

The problem with theories and specific suggestions is that they can in no way take into account the design of your house, where the appliances are, where you'll be using the signal, and a host of other factors.

Therefore, the best suggestion is to determine the places where you're most likely to use the signal (outside on the patio or porch, in the living room or den, the kitchen, etc) and then try several different antenna arrangements until you find that arrangement that supports the best signal in the various areas of use.

You want the antennas on your card and the router to be roughly parallel to each other.

Thus, if both are on the same floor they would both be vertical.

And if they were on different floors they'd be horizontal.

It really depends on the design of the antennas. My best guess is that you've got a pair of omnidirectional dipoles (probably the most common externally-visible antenna type on consumer indoor Wi-Fi gear). Omnidirectional antennas are actually only omnidirectional in 360 degrees of a 2D plane, not a 3D sphere (evenly-distributed spherical coverage is called isotropic). Dipole antennas do not have as good coverage out the "top" and "bottom" of the pole. Their coverage is optimized to be roughly equal out all 360 degrees around the "sides" of the pole. So for best coverage, make sure the side of the pole is perpendicular to the direction of the other device.

One way to visualize this is to take a small flat piece of cardboard, cut it into a circle about the size of a DVD, punch a hole in the middle of it and slide it over the dipole. Maybe use tape to keep it perpendicular to the sides of the antenna. Now imagine that the plane of the cardboard extends indefinitely in all directions, and use that to visualize how to point your antennas.

Yes, it makes a difference.

There is a "cone of silence", the tip of which comes to the ends of your antennas. I'm pretty sure you get maximum power transfer 90 degrees off of the cone of silence.

In other words, you want the antennas on both sides to be running parallel to each other. It's gets more interesting if you have materials around that are reflective to the wavelengths you're dealing with, then you can end up with a strong path through some intermediate surface.

Oh silly wave geometry, how you like to crop up all the time.

I was able to increase Wi-Fi signal from 1 bar to 5 to front of the house approx 25-30 ft and through plaster of paris walls and ceiling. That plaster blocks a lot of the signal, so what I did was make a coil around the top of the modem with thin wire – approx the gauge of network cabling – wished I had slightly smaller as it works better for this kind of application – but from there both ends of the wire connect together to another wire which has 2 wires to shape a diamond with a wood separator hanging almost flat with a slight angle to one side. The 2 wires from that portion go to 1 wire that goes across a 10 ft room along the ceiling about 1/2 ft from it where also the router is located on high shelf. At the other end where it ends up I coiled it again around a fixed magnet on the wall and made sure it was tight, not taught.

I use smartphones as a cheap security cam system and they always work flawlessly and I can always connect when away from home too. Before I put that up, I could barely get one cam to even stream to a wired PC with a viewer. When I checked the Wi-Fi signals to each smartphone, the db level had gone from -70ish down to -35~-40 and that's when I was able to not only record in 1920×1080p with perfect streaming and time sync between 5 cams... I could also teamview into each phone and administer it at the same time. Without that MacGyver design I do not think I would have a cam system currently.

Good luck to anyone that tries this method; it takes a little tweaking.  I found that devices that are on the far end of the place on the other side if ya put a piece of soldier from the ground plane between the anchor point on the magnet at the point it connects to the diamond... and run it in the direction of that device with a slight angle to it.. it definitely boosts that far end device up a bar or 2 .. enough to allow it to stream up to 2.5 megabytes a second with no issues.

The antenna position doesn't matter but they must be set at right angles to each other.

Not the answer you're looking for? Browse other questions tagged wireless-networking network-adapter connection antenna or ask your own question.