Can Somebody Explain About Wi-Fi Device Manager Settings And Power Settings In Windows 7? 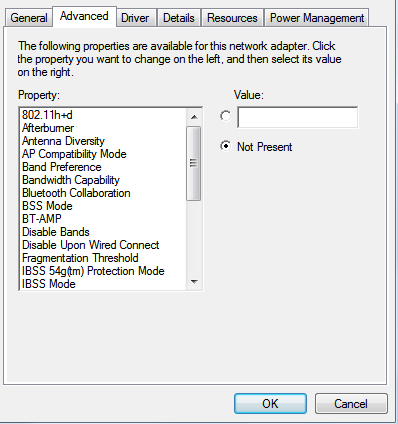 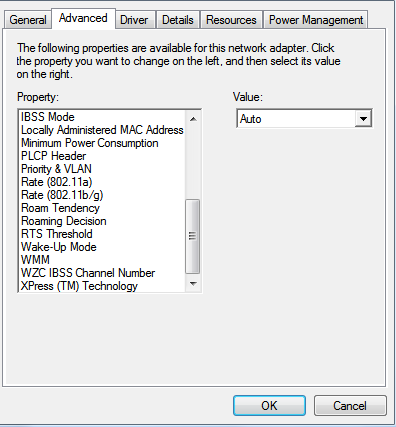 I would like to understand every property in the "Property" scroll pane. 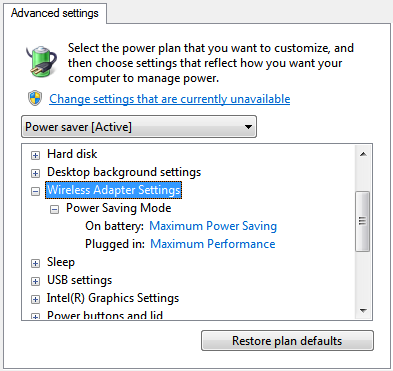 I would like to know what impact the selected options have on Wi-Fi.

The gest is that you can leave most settings to their default, unless:

Note: I don't know your background, but if a term is unclear then Wikipedia helps a lot.

Here is the list explained from my point of view:

As for the power settings, it changes the amount of power the network card use. So, as you configured it for battery it would go into a lower power state; when on battery this could result in less reception, less stronger output signal, less throughput and so on...

As harrymc noted in the comments, try to improve signal by checking your router and environment too.

That appears to be a list from a Dell Wireless adapter.

You can find a detailed explanation of all those settings at the following Dell support page:

Also, I believe the Power Saving Mode setting inside the Power Settings is just a way to change the "Power Save" setting in this list of advanced settings.

Not a direct answer, but rather a remark :

Many of these settings are not well-documented, so you will need hands-on access to the source of a WiFi driver to really understand them. You could find such a driver in a Linux distribution if you intend to go this way.

A starting place is to read carefully Wikipedia's Wireless LAN article and its references, then google for terms that are still unclear. But be prepared to invest a hell of a lot of time on this project (it could take years to cover all bases).

If you have a WiFi reception problem, modifying these parameters will not solve anything, and nobody can prophesize as to the impact of changing any of them. Most of these parameters are set automatically by the driver as a function of the network card and are not to be changed.
See rather this answer for improving reception.

Not the answer you're looking for? Browse other questions tagged wireless-networking power-management network-adapter device-manager or ask your own question.

-1
What do these advanced wireless LAN card properties specify?
0
Increased wifi router signal is enough to ensure connection?
0
Getting the fastest connection on a complex wireless network

2
how to remove obsolete device and network entries? Device manager “uninstall” option has no effect
4
How can I disable power saving for all devices in Device Manager?
1
Wake windows 10 laptop with wireless keyboard power button
4
Keeping Windows accessible for remote desktop
2
(Solved by a weird fix, still require a robust solution) Wifi Adapter Disappeared After Sleep