I'd like to make use of the Windows 7 backup feature for system settings and user profiles due to some major hiccups in the past. Problem now is that my main OS is a linux install which also resides in the same PC but on a different hdd, and is therefore found by the windows disk manager. The linux hdd has a /boot-partition which is marked as bootable and also contains the grub2 instance I use as boot manager and windows backup tries to include it in its routine and fails due to a unreadable file system. I tried installing ext2 ifs to fix the unreadable part but its seems like the backup manager runs on a different level and is not wary of the driver.

Is there any option for the backup tool to completely ignore the other hdd or can I deactivate it completely for windows as I dont need access to it?

edit I'm trying to backup the system images not the actual partitions. 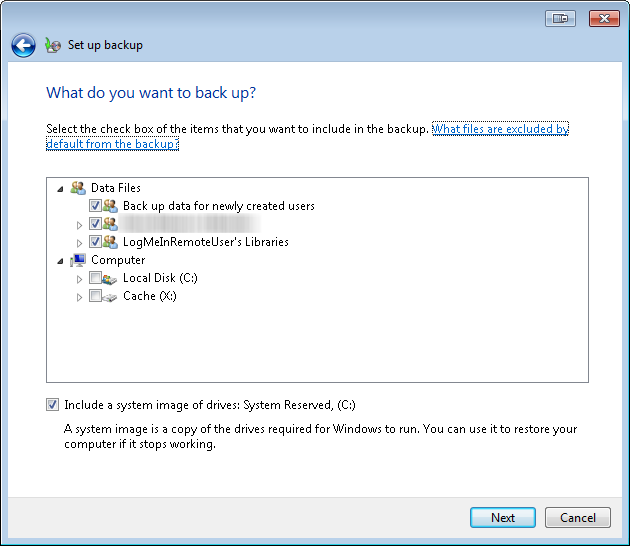 When you configure your backup, you can check and/or uncheck disks in which you wish to back up. You may want to uncheck the linux partitions

Not the answer you're looking for? Browse other questions tagged windows-7 linux backup or ask your own question.

1
Removing Linux Partition on Windows 7 machine
1
Linux Filesystem Backup Solution: SSD -> HDD
2
How to copy the files from my Linux-formatted external drive to Windows?
1
Dual booting Windows and Arch Linux (with GRUB2) - after using Windows, Windows Boot Manager made first in boot priority list
3
Is there an archive flag in ext2/ext3/ext4 or how does incremental backup works in Linux?
1
Windows VS Linux - Bare Metal Backup Restores
0
Windows 7 Backup and Restore from External HDD