I recently added another ATI 5870 card to my system to experiment with ATI Crossfire (dual GPU) performance increases.

However, I've had a lot of intermittent stability problems, most seriously a set of oscillating horizontal bands which appear during gameplay and become quite severe, to the point that you can barely see the screen to exit the game! 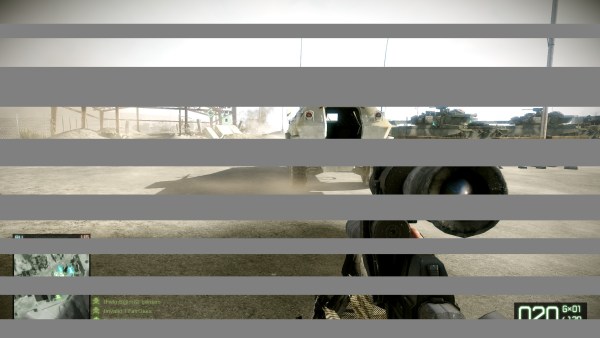 My system has an overclocked Sandy Bridge CPU that has been rock stable with a single 5870, but adding the second video card and enabling CrossFire seems to be problematic. The cards are both installed fine, fully seated with plenty of space between them, have both PCI 6-pin power connectors connected, and my 850 W power supply should be ample.

All to no avail!

This was a tough one.

After many hours of trial and error, someone mentioned to me that overclocking could be the issue:

overclocking can create issues with dual card setups (both CrossFireX and SLI.) You have to be careful about PCIe timings.

I thought overclocking couldn't possibly be it, since this system has been ultra stable for MONTHS with the current settings.

But setting BCLK to 100 (default) from the "auto extreme overclocker" override of 103 and not overclocking does seem to have worked. I was able to play several BF2:BC rounds with no issues, though I did see a hint of the horizontal banding at one point, it went away by itself.

So, watch out for any PCI Express overclocks when running an ATI CrossFire video card setup!

edit: additionally, I was seeing some other .. oddities .. that were resolved by setting the two video cards to the exact same clock and memory timings in the Catalyst Control Center AMD Overdrive section (although they are both 5780 cards, obviously, they came from the manufacturer with slightly different clock and memory timings). Thus, I also strongly recommend making sure both cards in Crossfire have the same settings.

2
Why is there tearing on my desktop when OC'ing video card?
0
ASUS EAH5450 Graphics Card (ATI Radeon HD5450 - 1 GB DDR3) on Windows 2003? Anybody got it to work?
1
Display pro-blem with my graphics card
7
How to underclock a graphic card?
2
MSI P965 and HD5450 PCI Express compatibility, will these two work?
1
Compatible Graphics Cards for Dell Precision T5400
3
High end graphics card - motherboard can't handle it?
1
How to fix missing crossfire option in CCC?
0
No display after installation of graphics card