What mode do modern 64-bit Intel chip PCs run the boot sector in?

I know with older machines like 286s, the first 512 bytes loaded from the first sector of the boot drive to 0000:7C00 in memory were run in 16-bit real mode, but what about modern 64-bit architectures?

Edit: I guess this is a wrong question upon thinking about it. The writer of the boot loader is the decider of which mode assembly instructions to use, right? The hardware just does what it's told. Then my question should be, what mode do major OS boot loaders like Windows 7, Mac OS X (the latest) and GRUB on 64-bit machines use?

All current x86-compatible computers (this includes x64 architecture too, both from Intel and AMD, but not Itanium) execute boot sector code in x86 real mode, exactly like the original IBM PC did 20+ years ago. It is not kernel mode, it's the original segmented mode without memory protection, multitasking, or code privilege levels.

If you can get hold of a floppy drive, put MS-DOS (or FreeDOS) on it, and stuck into today's computer, it will start booting.

It is boot code's task to switch into protected mode, set up memory protection etc. So your guess is partially right. The boot loader starts execution as x86 real mode and switches into protected mode, loads and starts actually executing OS Kernel in "kernel" (ring 0) mode.

For more information, you can visit Wikipedia article on Windows NT startup process, which has quite a few details on this subject.

what about modern 64-bit architectures?

Some of those modern 64-bit machines have old PC/AT style firmwares. As noted in other answers, they load and run the bootstrap program from sector #0 of a disc in pretty much the same way as the PC/AT did. This is the old PC/AT bootstrap process.

Other modern 64-bit machines have new EFI firmwares. These don't load a bootstrap program from sector #0 of a disc at all. They bootstrap by the EFI Boot Manager loading and running an EFI boot loader application. Such programs are run in protected mode. This is the EFI bootstrap process.

EFI firmwares in general switch to protected mode within a few instructions of exiting processor reset. Switching to protected mode is done early on in the so-called "SEC Phase" of EFI firmware initialization. Technically, 32-bit and greater x86 processors don't even start in real mode proper, but in what is colloquially known as unreal mode. (The initial segment descriptor for the CS register does not describe the conventional real mode mapping and is what makes this "unreal".)

As such, it could be said that those EFI systems never enter real mode proper at all, when bootstrapping natively to an EFI bootloader (i.e. when they don't employ a compatibility support module), since they switch from unreal mode directly to protected mode and stay in protected mode from then on.

As far as I know, the boot code always runs in Kernel mode.

For one, it's impossible for anything to decide what mode to use as it's ran from the boot sector, simply because it's the first instructions to be executed by the firmware. There is no way for the code to set what instructions are available to it before it starts running. Thus, by design, the assembly set available for the code on the boot sector is predetermined by the architecture.

Had any underprivileged mode were to be chosen for that, it would have been impossible to ever use instructions from higher privileged modes, which pretty much forces the fact that the boot code runs with the most privileged mode available.

The processor is placed in real-address mode following power-up or a reset.

Just for the kicks, a nice diagram from the manual: 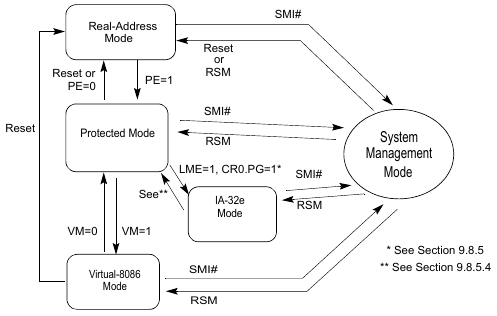 Not the answer you're looking for? Browse other questions tagged boot 64-bit mode or ask your own question.

12
MBR: How does BIOS decide if a drive is bootable or not?
0
Linux server boot issue
0
Kali Linux and Win 7 dual boot, I want to change the active partition and bootloader, not sure in what order
0
Dual boot Windows 10 after initial Arch Linux instilation
0
In the case of multiple Operating systems, Is it the boot loader in the MBR that looks into all the boot sectors of the partitions and list them?
2
When people say "In the first readable sector" are they refering to readable for the firmware or Operating system and is there a difference?
0
What boot technology is this system using?
0
Why am I unable to boot from Linux Mint after adding its boot sector manually to the MBR via BCDEdit?