I have a computer that came with Windows XP Home (with the sticker on it that has the product key). I used it for some time with a (legally obtained) copy of Windows. Now I want to reload the original Windows version and product key to give it to a relative. I can't give them my copy of Windows, since it came from my MSDN subscription and is only usable by me for software development/testing. When I load the machine from my Windows disk, it does not accept the product key on the sticker.

"The CD key you entered is not valid"

I did double check my keystrokes and the XP disk I am using had all versions and I did indeed choose the correct one (Home Edition) that matched the product key sticker.

EDIT: It is clear to me from the answers below that I am using a non-OEM disk with an OEM product key. I am the first one to understand Microsoft's need to protect their IP. However, it seems like there might be a way without tracking down and purchasing recovery disks for a five year old machine just to turn around and give the machine away.

Is there a way I can accomplish this?

If this is from a small / local company, the chances are they bought a "off the shelf" OEM product and you can use any other unbranded OEM cd that is the same edition of Windows and the same service pack.

If this is from a big company with their logo on the OEM cd, you will need to use the recovery CD / DVD or method they provide to reinstall your Windows, and typically these are pre activated and do not need a serial key.

Typically (and not always) I find that the "consumer" big brands such as Sony, Acer e.t.c. do not provide raw Windows installations and you need to use a recovery cd that is locked for your model, where as if you can obtain a HP or Dell Windows CD, these are usually just standard installs that will work on any machine from that company (maybe requiring a few drivers).

My understanding about Windows XP CD keys is that you can't mix and match retail and OEM keys. You need to use an OEM disc with an OEM key.

There are several things that will stop the key / disk pair from working.

Just to make it more awkward, not all OEM disks will recognise the same set of keys. So you may need an OEM disk of the correct version, and correct vintage (right service pack level) and from the correct manufacturer!

I got lucky on a friends PC. Their dad's laptop install disk also accepts their OEM key. (Both are SP1 - shows how old they are!)

If you can get a Windows XP CD with service pack 3, you can skip the product key screen during the setup.

When installing Windows XP with Service Pack 3 integrated setup CD or DVD for retail or OEM channel (clean install from fresh state or upgrade), the installation process will still prompt for a 25-character product key as appeared on the yellow sticker on the back of Windows folder to be entered. However, user can leave the product key field blank, and simply click Next button to skip supplying a product key during installation. 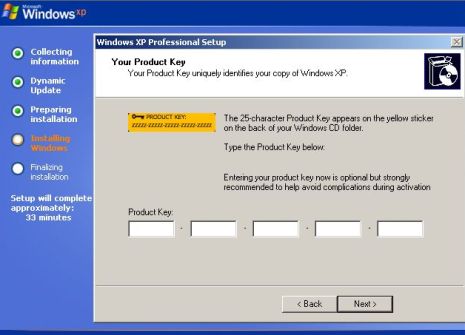 Once the installation is complete, you can enter the correct key to activate Windows. 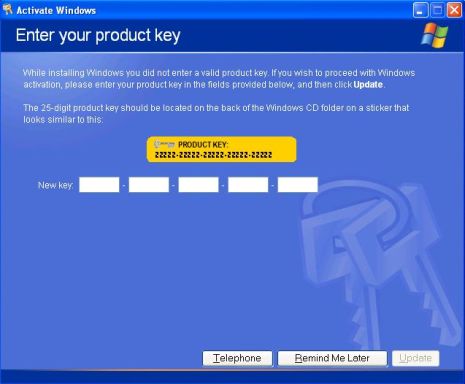 One thing that I've run into is that the license key on the Dells we get is just a license. It doesn't activate windows at all, at least any of the versions I've tried. However, the Dell Windows install CDs are pre-pidded never prompt for a key. If you can, try to locate the original restore disks. While vendor specific, they are still fairly generic. A restore disc that came from that vendor with a different computer may also work.

Given the circumstances, and assuming you can trust your relative to be discreet, I'd just use one of your MSDN keys to install it. You can always use the machine for development work next time you visit.

You doubled checked the product key, can I suggest that you triple check! I recently searched a bunch of ways around a similar issue, turned out that I had misread an 8 as a B! A bit dim of me, but easily done.

Otherwise (with Vista, maybe with XP), there are legal ways of extending the 30 or 90 day trial period.

I am aware that this is an old question, but feel that sharing this information might be useful for other people needing to do a reinstall of an OEM version of Windows XP. I was in exactly the same situation, I had an Acer desktop that had a Windows XP Home Edition license key on the side. This was my dad's PC and since he had passed away I wanted to reinstall the machine before I donated it to a charity organisation. I had no idea where the Acer recovery CD was that came with the machine. I had an EOM CD for Windows XP Professional but could not install that because the license was for Home Edition. I also had a Windows XP Home Edition retail CD and so tried to do the reinstall using this CD, only to find that I could not enter the OEM license key on the side of the computer, and I wanted the copy of Windows registered and activated with the license key on the computer case.

Ok. Now is the part where I tell you that it can be done, but only if you are not afraid of using an OEMBIOS changer tool to change the Windows installation from Retail to OEM. The steps for doing this are clearly outlined in this link, specifically in the section entitled "Mission 5".

The article above breaks the steps involved into two sections, 1) Detect OEM SLP string present on the machine that you are setting up and download the appropriate OEMBIOS file set, 2) Use the OEMBIOS Changer Tool to change the windows installation from retail to OEM.

Here are the steps in the article:

Mission 5.2: Replace your VL or Retail License with OEM

Note that, in my case, the four files that I needed to copy into "Uncompressed Oembios Folder" (OEMBIOS.BIN, OEMBIOS.CAT,OEMBIOS.DAT,OEMBIOS.SIG) had names that ended in underscores and I needed to correct these filenames before copying them into the specified folder. In other words, I had a file OEMBIOS.BI_ which I first had to rename to OEMBIOS.BIN, and likewise for the other files.

After completing these steps, OEMBIOS Changer Tool will prompt to restart Windows; at this point make sure that your Windows XP retail edition CD is not in the CD drive. The reason for this is that after the restart the windows installation will notice that files have been changed and will try to copy them again from the CD. So if the Windows CD is not in the drive you should get a popup saying that some files have been changed and need to be recopied from the Windows CD; it will show a button to retry the copy. Ignore this popup for the time being and first do the registration and activation of Windows. You will notice during the registration process that Windows now prompts you for a license key "attached to your computer" rather than "on the back of the Windows CD", and it will accept the key on the side of the computer case. Once the windows registration has completed and Windows XP activated, then and only then can you put your Windows CD in the drive and click on the "retry" button to let the Windows installation put the original files back so that it is happy.

So, bottom line, it can be done. It seems like a lot of steps, but is not actually that hard. And at least this way you don't have to pay the PC manufacturer just to send you an OEM version of Windows XP.

Hope this helps someone who is in a similar situation to me. :)

Not the answer you're looking for? Browse other questions tagged windows-xp installation license license-key or ask your own question.

1
Will I be able to activate my MSDN media Windows Home Server with an OEM license key?
0
Windows XP activation after install from another OEM CD
4
Can I activate Windows XP Pro installed from Retail (or VL) media with OEM key?
2
Why is the Windows XP COA product key found by winkeyfinder different from the genuine sticker product key?
2
Reinstalling Windows Xp Professional OEM
8
Can I reuse the licence of Windows XP from laptop to desktop
4
OEM Windows 7 key with downloaded ISO?