What can I safely delete from the "C:\WINDOWS" folder?

I have a Windows 7 system, and my C: drive is regularly getting full.

What can I safely delete from the C: drive, especially the Windows system folder?

The biggest stuff in C:\Windows should be the winsxs folder, read more about that problem Why does the /winsxs folder grow so large, and can it be made smaller?. Since that stuff is used by all kind of apps, you must not remove it. And since it is the biggest chunk (of "junk"), all other directories do not matter that much any more.

You can obviously remove some leftovers / rollback-stuff, best done via http://www.piriform.com/CCLEANER.

To make it short: Buy a bigger disk.

I've written a Blog post on the SuperUser Blog detailing some of the things you can do to scrape back some hard drive space. Read it at Where did all my hard drive space go?

To summarise, there are many things you can do, depending on whether there is functionality that you need:

An alternative to the excellent CCleaner that Akira linked is a more commercially supported alternative from IOBits, Advanced SystemCare4. There is a free version available which will likely do just as much to clean out your system as CCleaner, but has a few added extras.

Since October 2013 the disk cleanup utility was enhanced with the ability to clean up Service Pack and Windows Update files, this is the safest way to reduce the sized of WinSXS folder. 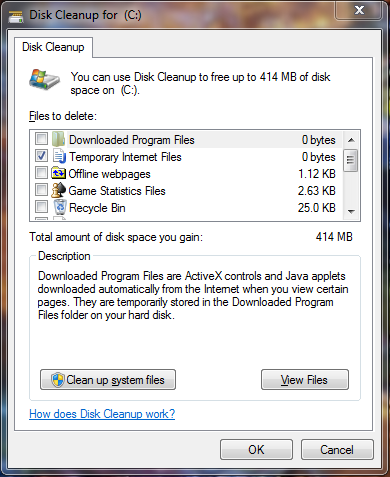 Click Clean up system files button and this is what you will see. 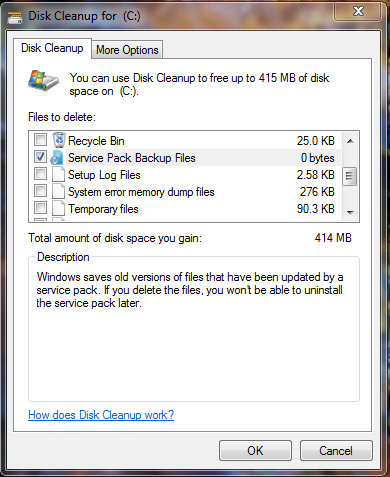 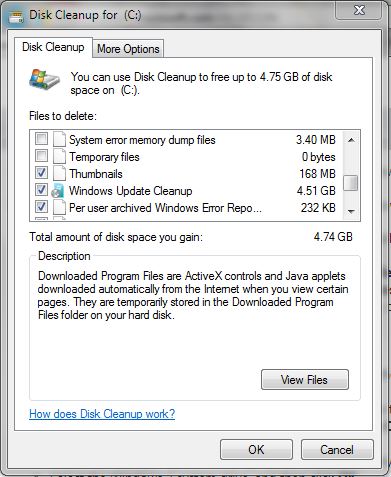 I've been playing with the WinSXS folder in a few test installs and I have figured out a way to save some space. In a 3 month old Windows 7 Pro install on my laptop, the SxS folder grew to 14GB. I can safely delete 7.4GB of that without any issues.

I was a bit surprised to read that most "technical" write ups say you can't delete anything in the SxS folder without issues. This is just not true and I wonder if anyone has tried different scenarios or if that opinion is just grown off of Microsoft's warnings. There is one thing that you can't do after "cleaning" the SxS folder, but it's rare that you'd need to so I won't even waste the keystrokes.

I've had this running smoothly for a LONG time, and on the laptop I use for work as an IT Director, so I put it through it's paces - that's for sure. It's well worth the disk space in some cases. For example -- I love my laptop which is an older Dell and I've got an SSD drive in it. The SSD is only 60 gig, so space is at a premium. As is, I use a 32GB SDCard in the onboard reader to give me extra space, but knocking a chunk of useless crap off is a nice option when you don't need 75% of the files in that folder.

I'll do a write up on it and post it here in the next couple of days.

Not the answer you're looking for? Browse other questions tagged windows-7 windows or ask your own question.

178
Why does the /winsxs folder grow so large, and can it be made smaller?
0
Deleted contents of winsxs folder and BSOD

0
Windows Vista C: drive full - how to clear - what to clear?
5
Is it safe to delete the Windows_Old folder?
2
Can't delete folder from old Windows installation not even with disk cleanup
3
Can I safely delete this partition?
4
How to obtain the "eject" / "remove safely" for USB on Windows 8?
1
Can I Safely Delete Ubuntu's /boot Partition?
21
Can I safely delete folder $GetCurrent in Windows 10?