How does Windows processor affinity work with hyperthreaded CPUs?

How does Windows processor affinity work with hyperthreaded CPUs? Let's use an example (pictured) of a system with four cores, each with a hyper-threaded virtual core.

This is all very vague and confusing to me. HT is great, but it sure seems to reduce the transparency of resource allocation. 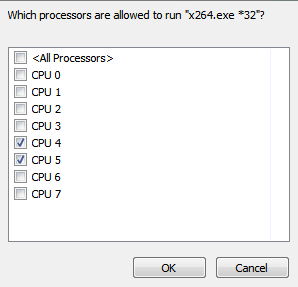 Which cores correspond to each "CPU" below?

Does (say) CPU 6 and CPU 7 below represent one core; the HT and the real core?

There is no distinction between the two - they both have physical hardware interfaces to the CPU, the logical interface is implemented in hardware (see the Intel Core Processor Datasheet, Volume 1 for more details). Basically, each core has two seperate execution units, but it shares some common resources between them. This is why in certain cases hyperthreading can actually reduce performance.

If, for example, CPU 6 represents a real core and CPU 7 an HT core, will a thread assigned just to just CPU7 get only the left over resources of a real core? (assuming the core is running other tasks)

See above. A thread assigned to ONLY CPU6 or ONLY CPU7 will execute at the exact same speed (assuming the thread does the same work, and the other cores in the processor are at idle). Windows knows about HT-enabled processors, and the process scheduler takes these things into account.

Is the hyperthreaded managed entirely within the processor such that threads are juggled internally? If so, is that at the CPU scope or the core scope? Example: If CPU 6 and 7 represent one core, does it not matter which a process is assigned to because the CPU will assign resources as appropriate to a running thread?

Both. The actual hardware itself does not schedule what cores to run programs on, that's the operating system's job. The CPU itself, however, is responsible for sharing resources between the actual execution units, and Intel dictates how you can write code to make this as efficient as possible.

I notice that long-running single-threaded processes are bounced around cores quite a bit, at least according to task manager. Does this mean that assigning a process to a single core will improve performance by a little bit (by avoiding context switches and cache invalidations, etc.)? If so, can I know I am not assigning to "just a virtual core"?

That is normal behaviour, and no, assigning it to a single core will not improve performance. That being said, if for some reason you want to ensure a single process is only executed on a single, physical core, assign it to any single logical processor.

The reason the process "bounces around" is due to the process scheduler. This is normal behaviour, and you will most likely experience reduced performance by limiting what cores the process can execute on (regardless of how many threads it has), since the process scheduler now has to work harder to make everything work with your imposed restrictions. Yes, this penalty may be negligible in most cases, but the bottom line is unless you have a reason to do this, don't!

Again, this is the way it's supposed to be.

Ultimately, what this boils down to is that there's often little you (as an end user) can do with thread affinity to significantly impact performance other than ensure that you're running an up-to-date OS that knows about the various bits in your system.

If you find any workloads where manually assigning affinity has a significant impact, report it as a bug to the application developer so that the program can get fixed.

Not the answer you're looking for? Browse other questions tagged windows scheduling hyper-threading affinity or ask your own question.

0
Hyperthreading Calculating Load
1
do I get half the CPU speed for a single thread if HT is turned on?
1
Can hardware virtualisation use threads from processor cores
0
Again about Hyper Threading
0
setting affinity for multiple cores on dual cpu system
1
Is it possible to assign specific CPU/IO/RAM of hosted machine to virtual machine?

4
Running a virtual machine on a dedicated processor or core
8
Number of cores available to VMware Player limited to physical cores or hyperthreaded cores?
5
What are “hyperthreading” and “virtual cores”?
13
cpu load measure with hyperthreading on linux
0
Cores and threads - Performance
0
Virtualbox with i7-4790 one thread per virtual machine
7
How does the Windows 10 scheduler deal with Hyper Threading since Core Parking is disabled by default for Intel CPUs?