I'm currently facing the problem of having a single person assigned to two things at once.

The idea is to have Tiago working on a long task (let's say..2 weeks). During that time, Jorge will need help for a couple of days and during that time Jorge would like to have Tiago join him, while still continuing his task. Keep in mind that in no way I mean Tiago should work more per day than what he would in case he didn't come help Jorge. Tiago's long task is not tight scheduled, so it is perfectly fine to do another task at the same time and still finish his duties on time.

Is there any way to represent this in MS Project, other than having to divide the long task in 2 subtasks, having the second subtask start only after Jorge's task is done? 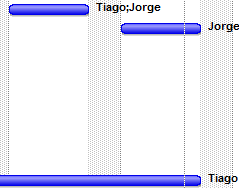 The most straightforward way to achieve this is to update the "units" value for each resource assignment. The "units" field contains a percentage representing the proportion of that resource's time devoted to the task you've assigned them to. So Tiago could be assigned to his long task at 90%, and assigned to Jorge's task at 10%. Tiago's total allocation doesn't exceed the time he has available, and he can still be seen to be working on two tasks at once.

Not the answer you're looking for? Browse other questions tagged microsoft-project or ask your own question.