Since I've had my mac, I keep seeing this weird symbol. Till today, it had been only in the place of bullet points in OpenOffice.org. The first pictures shows this in a .doc file created on a Windows system.

I thought nothing of it - just an annoyance. It appears no matter what the font. Real bullets appear if I delete the text and insert a bulletted list using the toolbar.

Then, today I noticed in in iTunes - which seemed strange.

What is it (unicode related?), and how do I get the bullets working properly? 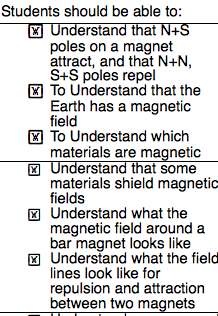 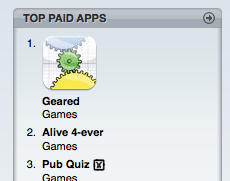 Edit: The plot thickens... If I boot in Safe Mode, the symbols look like little snap boards like you'd have at the beginning of filming a scene in a film...

(Err, yes, this answer is way too long. And there's no happy ending for the bullets! Highlights in bold...)

The images from the question are defined in Apple's Last Resort font, which holds 236 different funny symbols. I guess the name says it all, but according to Wikipedia:

LastResort is a Mac OS font that is invisible to the end user, but is used by the system to display glyphs that are not available in any other font. The symbols provided by LastResort place glyphs into categories based on their location in the Unicode system and provide a hint to the user about which font or script is required to view the unavailable characters.

Examplar glyphs were chosen in a number of ways. Almost all of the Brahmic scripts show the initial consonant ka. Latin uses the letter A because it's the first letter, and because in each Latin block there is a letter A so they can be easily differentiated. Greek and Cyrillic use their last letters, omega and ya, because they are so distinctive. Most other alphabets and syllabaries use their initial letter where distinctive.

(I like the Unicode BMP Fallback font, like used in Firefox, much better as it shows the exact 4-character Unicode code.)

So, your Mac does not know what to display, and uses the Last Resort font to provide some information.

My first guess was: Microsoft Office uses some proprietary symbol font, in which it uses character codes from the private use area (PUA) to define what the bullets look like. (Or maybe the author has some odd font installed from which some funny bullet has been used.) Your Mac neither knows that font, nor has any other font in which the same Unicode character code happens to be defined. And even if another font did define some character for that code, it would not help either, as characters from the private use areas may by definition have a totally different meaning in different fonts. Installing Office on the Mac might also include the font, probably making the bullets show fine in OpenOffice.org as well. (In fact, installing a trial of Office might already install the missing proprietary font.)

While the above would be true for any sane usage of Unicode, some further investigation learns that in old applications Microsoft uses the range U+F020..U+F0FF to display symbols using another font. When displaying characters from that range, it then automatically switches to another font for those characters. Some organisation named SIL International figured out:

One of the mysteries of text formatted with symbol fonts (at least, in certain Microsoft applications) is that characters appear to be encoded in terms of 8-bit code points even if a document is otherwise encoded in Unicode. When U+F021 was inserted into WordPad from the clipboard, not only did WordPad (more precisely, the Rich Edit control) apply the Wingdings font, it seems that it also changed the code point to 0x21. When the character was reformatted to a non-symbol font, this became U+0021.

Or, as Microsoft explains it, for Microsoft Platform Software Development Kit-January 2000 Edition:

Richedit 4.1 maps the range of characters between U+F020 and U+F0FF in the PUA to symbol fonts. Therefore, when you map any character in this range, Richedit 4.1 shows the symbol character instead of the end-user-defined character (EUDC).

I think that meanwhile Microsoft has added the symbols to many Microsoft versions of fonts, to allow more recent Microsoft software to display those characters without switching fonts. For example, U+F020 shows a bullet in most fonts, but not in Arial on your Mac. Installing a Microsoft-version of Arial might help. But that might surely get you into other problems when you're using Arabic...

I doubt any non-Microsoft software will handle the above exceptions.

One way to determine the name of the font: when printing from Word to PDF one can choose to include the font (or: the subset of characters that are used) in the PDF, to ensure it prints fine on systems that do not have that font installed. So, peeking into the PDF's properties might then reveal the name of that font. And maybe simply selecting the character in OpenOffice.org will already reveal its name in the font list. (However, given the automatic displaying of symbols like described above, both methods will probably not work for bullets at all.)

One way to determine the exact character code: copy it (for Pub Quiz , copy it from the auto-suggest in the search of iTunes) and paste into some Unicode code converter. This reveals that the Pub Quiz character is U+E047, which could be some odd double-quote. But well, as this is from a private use area, and we don't know which font the developers had in mind when they typed that name in the iPhone app-store, I guess only the developers can tell us what they hoped it would look like...

(Fileformat.info has a neat utility to show the character using all fonts on your computer.)

I only can answer the "what is it" portion of your question.

The text around the side, "Private Use" and "e000" and "f8ff", are referring a Unicode character set - specially, the Private Use set:

The UCS includes 137,468 code points for private use. This means these code points can be assigned characters with specific properties by individuals, organizations and software vendors outside the ISO and Unicode Consortium. A Private Use Area (PUA) is one of several ranges which are reserved for private use. For this range, the Unicode standard does not specify any characters.

The use of the PUA was a concept inherited from certain Asian encoding systems. These systems had private use areas to encode Japanese Gaiji (rare personal name characters) in application-specific ways. One example of usage of the Private Use Area is Apple's usage of U+F8FF for the Apple logo.

According to Brian Tiemann at Grotto11, these show up when the character's undefined:

Look at that. It's squares, like always, for undisplayable characters. But now that it's all vector graphics, and because the Arabic font sets apparently aren't done yet (as they keep completing point releases of OS X, they keep adding character-set packs that fill out these blocks of letters), it's squares with cool information in them. The Unicode range that Arabic occupies, plus a central symbol to tell you what will eventually go there.

This is what it looks like when Apple isn't quite done with something.

So our curiosity was running rampant now; we switched into Unicode hex input mode (hold down Option and type four-digit hex numbers) and started entering values, to see what the ranges were like and what they were assigned to, and what symbols they had: 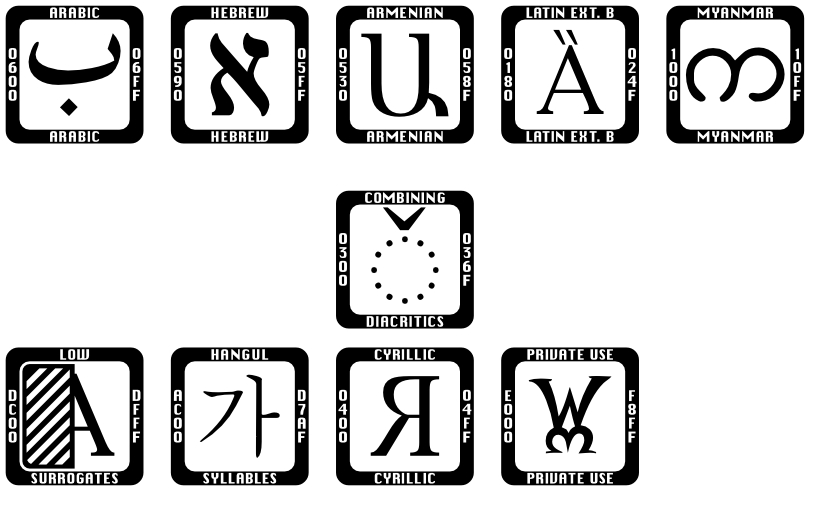 Mmm-mm. Isn't that insane? I love it. (And especially that Dr. Seuss-looking "Private Use" one.) Apple even makes unimplemented features look cool. These squares sit at the beginning of each block of assigned characters and define what that block is going to be, and if the characters haven't all been finished yet, they all show up as that generic identifier.

Wish I could tell you why it's being displayed, though...

It sounds like a font cache corruption issue. If you are running Leopard (10.5) you can try running sudo atsutil databases -remove in the Terminal to remove the font caches on your computer. A GUI alternative is FontNuke.

I found the likely font for the U+E047 character using the Characters Palette. Most likely the app designer wanted to use the left pointing finger dingbat from Adobe Pi Std Regular.

Try booting in Safe Mode, which in 10.5 & 10.6 will clean all Cache's and generally handles this sort of thing easier...

Starting up into Safe Mode does several things:

It forces a directory check of the startup volume.

It loads only required kernel extensions (some of the items in /System/Library/Extensions).

It disables all fonts other than those in /System/Library/Fonts (Mac OS X 10.4 or later).

It moves to the Trash all font caches normally stored in /Library/Caches/com.apple.ATS/(uid)/, where (uid) is a user ID number such as 501 (Mac OS X 10.4 or later).

It disables all startup items and login items (Mac OS X 10.4 or later).

So this should take care of the majority of issues that might cause this... To Safe Mode Boot, just hold down the shift key before you hear the startup chime... You have about 2-3 seconds to do it, when you hear the chime...

And you can let go after a few moments.... Once you get to the login screen, just tell the system to reboot, and let it reboot normally.... Then try it...

I have a little bit more information on Safe Mode here...

This is certainly an odd situation.

Does this happen if you create a brand new user and log in as the new user? if so, it's probably caused by something in your user's Library folder, in your home directory. Please post the results and I'll expand my answer with further instructions. (I suspect a corrupt font or something else funky in your Library)

Not the answer you're looking for? Browse other questions tagged macos mac unicode symbols or ask your own question.

5
How can I tell Firefox to ignore unprintable characters?