What is the difference between a VLAN and a subnet? [closed]

Ask Question
Asked 8 years, 7 months ago
Active 8 months ago
Viewed 232k times
92
Closed. This question is off-topic. It is not currently accepting answers.

I have read numerous forums and articles regarding VLANs and subnets.
However, I haven't understood the functions of each apart from the following:

VLAN - A good way to think of this is "switch partitioning." Let's say you have an 8 port switch that is VLAN-able. You can assign 4 ports to one VLAN (say VLAN 1) and 4 ports to another VLAN (say VLAN 2). VLAN 1 won't see any of VLAN 2's traffic and vice versa, logically, you now have two separate switches. Normally on a switch, if the switch hasn't seen a MAC address it will "flood" the traffic to all other ports. VLANs prevent this.

If two computers are going to talk using TCP/IP, then one of two conditions must be met:

Forcing traffic to go through a router, even though it's not needed such as on our 8-port switch above, has security and performance benefits - it gives you an opportunity to filter traffic, an opportunity to optimally route traffic based on type, and routers do not forward broadcast traffic (unless unusually configured). VLANs are sometimes used as a "hack" to manage flows/visibility of IPv4 broadcast traffic.

Edit to answer some of your questions:

I'm sure many high-end switches/hardware have a "VLAN router" "built-in" to them where spending an extra port within each VLAN connecting it to a physical router really isn't necessary if you want to route between VLANs in the same switch. This might be where the VLAN IP or "gateway" comes into play. (I invite those more knowledgeable to edit this)

I found the other explanations complicated.

Set a bunch of computers to VLAN 3 and they'll be in their own little isolated world; they won't see any other traffic.

Suddenly you can have multiple LANs operating on the same wires (i.e. virtual LANs). You can even have two computers with the same IP, since they have a different VLAN tags (e.g. 3 verses7)

Setting a VLAN ID is done by configuring the network card driver: 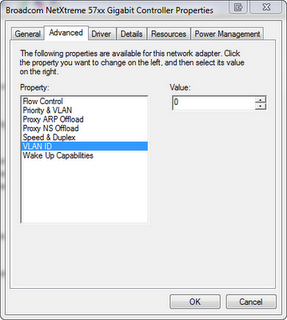 Your mileage will vary with your network card and its drivers.

The simplistic explanation is that VLANs exist to allow different subnets to share physical cabling, ports, and switching. You could have distinct subnets on your network without vlans, but you'd have to have a different set of wires for each.

1.If I have multiple subnets I assume that you would need a router to communicate between each subnet.

Yes, you need a router to move packets between subnets.

Only devices within each subnet would be in the local broadcast domain for that subnet. Is that right?

Yes, a subnet is a broadcast domain.

2.Do I need a subnet to setup a VLAN?

3.I am aware that a VLAN can exist within a subnet but my understanding is that you would have to assign the VLAN an IP address of that subnet.

No, as I understand it, VLANs are defined in the switches and isolate the traffic of each VLAN.

How can it be isolated from the rest of the subnet?

A VLAN is a subnet.

4.When would you set up a VLAN especially if I am able to segment my network using subnets?

A physical LAN is comprised mostly of switches and cables arranged (in the case of Ethernet) into a single tree structure.

Normally a LAN is a single subnet. An organisation might have several LANs linked by routers.

Update: some answers to follow up questions in comments.

if I wanted devices on 2 separate VLANs to communicate that a router is not needed as I can use trunking.

Here's some quotes from http://www.formortals.com/an-introduction-to-vlan-trunking/

"VLAN trunking allows a single network adapter to behave as “n” number of virtual network adapters, where ”n” has a theoretical upper limit of 4096 but is typically limited to 1000 VLAN network segments."

"Routers can become infinitely more useful once they are trunked in to the enterprise switch infrastructure. Once trunked, they become omnipresent and can provide routing services to any subnet in any corner of the enterprise network."

So you still need a router but, with VLAN trunking, it can be a one-armed router (router on a stick). High end switches include routing capabilities, so you may not need a separate router because your high-end switch is also a layer 3 router.

When you say that I need a subnet to setup a VLAN what do you mean exactly?

VLANs are a layer 2 concept. Just as Ethernet switches are a layer 2 device. VLANs can make a couple of switches do jobs where you might otherwise need half a dozen switches in isolated groups. However your nodes (computers, printers, etc) typically use layer-3 addressing (IP).

This is where sub-netting comes in - dividing an organisation's allocated layer-3 network address range into sub-networks by using subnet masks. Then you can use a router to allow devices in one subnet (in one VLAN) to communicate with devices in another subnet (in another VLAN).

1.If I have multiple subnets I assume that you would need a router to communicate between each subnet. Only devices within each subnet would be in the local broadcast domain for that subnet. Is that right?

2.Do I need a subnet to setup a VLAN?

No. However, if you want devices in a VLAN to communicate with one another they will likely need some L3 protocol.

3.I am aware that a VLAN can exist within a subnet but my understanding is that you would have to assign the VLAN an IP address of that subnet. How can it be isolated from the rest of the subnet?

Not clear what you are asking.

4.When would you set up a VLAN especially if I am able to segment my network using subnets?

VLANs are simply a way of making a L2 device appear to be multiple L2 devices.

Not the answer you're looking for? Browse other questions tagged subnet vlan or ask your own question.

0
How to find the VLAN IP address?
0
Difference between a VLAN aware switch and a router
1
Does the IP address assigned to a VLAN have to match the VLAN number?

1
Vlan config for switches
1
Subnetting 90.103.80.0/21 into 8 subnets with at least 250 hosts per subnet
0
Is there a benefit of setting up VLANs if my subnets are wired separately?
2
Is this subnetted IP address valid?
1
Isolate wifi network LANs from each other while sharing same WAN