How can I use a single search / replace to replace all words town with village preserving the case of the first letter in this sentence: 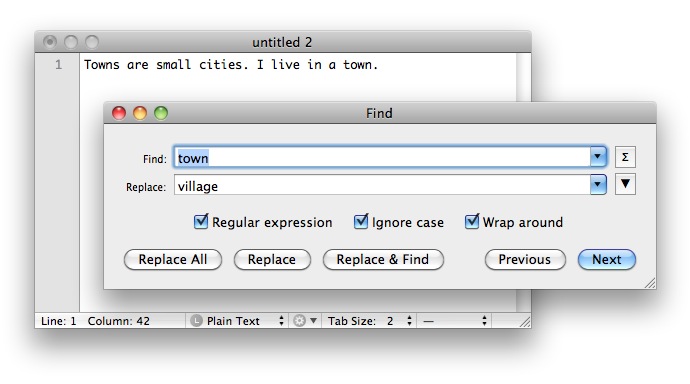 (And uncheck ignore case in the dialog)

I'm on my work machine right now, so no TextMate here for me to test on, but i think this might do what you want:

The 'Find' pattern searches for the letters own preceded by a T or a t, and then captures them to $1 and $2 respectively. The (?<!T) inside the second capture makes sure that you don't get both of them at the same time (like Tt together), as unlikely as that probably is, and the (?<! ) bit means that own can't be preceded by a space — this should prevent it from matching the word own by itself. The \b on either side means that it should only match the whole word (otherwise it will match things like townies and chown). Lastly, the (s)? part captures a final s (if it exists) to $3.

The replace pattern uses conditional insertions to determine what to replace the text by. In pseudo-code the replace string says basically:

(And then it adds $3, which will either be empty or contain an s)

It's ugly, but i think it will probably work for the example you gave anyway.

Not the answer you're looking for? Browse other questions tagged macos find regex textmate find-and-replace or ask your own question.