Backspace does not work in Cygwin

I just installed Cygwin and the BACKSPACE functionality is not there, i.e. when I hit the Backspace key, I get a space.

I've been trying to research this issue on Google, but did not find anything conclusive.

In my case backspace was not at all working after creating blank ~/.vimrc. Following change made it work

This will add it to the .bashrc and everything may work nicely!

I found a solution to a problem that presented like the one above.

Simply run Cygwin setup again and reinstall termcap and terminfo. If you use the search box you can find them quickly. Instead of saying "Keep" for each, click it to make it say "Reinstall". You may have to check the "Hide Obsolete" checkbox for term to appear in the search.

My terminfo folder was entirely missing. No idea why. Hope this helps someone.

When you set the TERM type you are telling the host which TERMCAP to use to draw within the terminal window. Most *NIX hosts don't know what a 'cygwin' termtype is so they don't know how to do onscreen character manipulation such as inserts, deletes, scrolls, font changes, etc.

If you change the TERM variable in CYGWIN before telnet or SSH to a host you will get much better results:

The host now knows you have an ANSI terminal type and it can use it's ANSI TERMCAP file to tell it how to communicate.

If you can't get that to work and most everything works properly except the backspace, you can reprogram "getty" on the host you connect to to recognize what you want, and here's how (this is the oldest, most common and most universal way of solving backspace/delete issues):

You ssh or telnet to your host and in the host you run the stty command. If you hit the "BACKSPACE" key and it does not go backward it's because the terminal is probably looking for a different character based on the TERM type. Rather than dig through all of that you can manually set the backspace definition at the CLI or in your .profile, .bashrc, or .bash-profile file in your $HOME directory as you desire or based on the flavor of *NIX you are using.

So if you press ^H (that's CONTROL-H) and your key backs up but you hit the BACKSPACE key and it does not try using stty as follows:

Most of the time it will look like this:

The '\' tells it that the next character is going to be a non-printable control-character and to accept it, not "interpret" it.

Once you press [ENTER] you should be able to press your [BACKSPACE] key and have it backspace/delete whatever you typed.

You can set this in your shell.

Now, if you still use VI, sometimes the translation doesn't work and you have to actually type ^H in vi, but that's OK.

You could have said:

and it literally would have translated 'k' into the erase/delete character.. 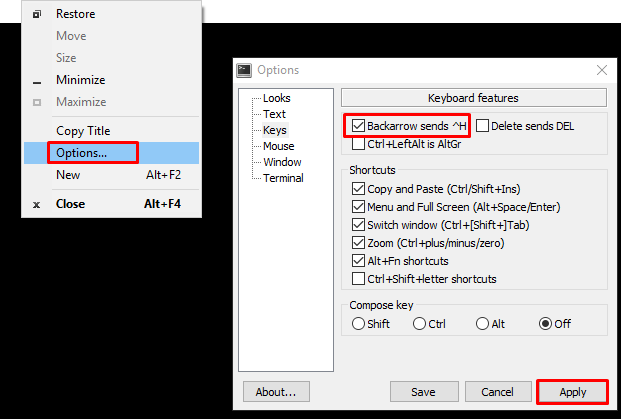 This is the only thing that worked for me, especially since if you have to SSH to a server (not all fixes will work) I used to add stty erase ^? to my .bashrc but this only fixed the issue 80% of the time.

Ok, I had this issue with manually updating a Cygwin install. Anyway I found this post, which lead me to the solution for my install.

Once I copied the "cygwin" file to this location, the bash shell backspace key worked fine, as did tab and others.

Changing the TERM variable to cygwin and adding SET TERM=cygwin to the .bat file didn't work for me, but I fixed it. Here what I did: In package manager due installation I selected to install xterm: X11 terminal emulator, after installation I added SET TERM=xterm to the .bat file (like proposed above), launched terminal and in Options -> Terminal menu selected Type=xterm, then restarted terminal. Backspace started to work correctly!

I agree with all the answers here. But there is a far simpler way found here: http://lifepluslinux.blogspot.in/2014/08/backspace-doesnt-work-in-vim-on-cygwin.html

This will add it to the .bash_profile (not .bashrc, which didn't work for me, and with a leading line break)

After spending 2 days of time reading stuff online. I found this one that worked for me. I do not know if this case matches every one. But it worked like a charm to me thanks to Yuksel

The problem was with 'termInfo' files, Steps he have suggested

WARNING: terminal is not fully functional

you should either get

that should respond you similar to below text

from the output, you got from the 3rd step. now copy all the files and folders that exist inside /usr/share/terminfo to the folder C:\cygwin\etc\terminfo - NOTE: this folder might be different from yours depending on the installation

It's available through the Cygwin installer. Best Terminal for cygwin.

7
backspace not working, even after attempted fix
8
Backspace key not working in vim

8
Backspace key not working in vim
2
pkg-config on cygwin will not find the gsl package
3
when in a cygwin, how can I display the windows folder where cygwin is installed?
13
Cygwin Terminal backspace and arrow keys not working
5
How does `chmod +x` work in cygwin?
17
MobaXterm backspace sends ^H
3
Git - Git Pull Not Working In Cygwin
1
SSH Cygwin Password not recognised
0
cygwin bash - if statement doesn't work