AFAIK you can't as this behavior is by design and controlled by the command interpreter. There is no method of "mapping" or even "intercepting" this unless you de-compile and recompile the interpreter directly.

At this site, I found an effective solution:

To not have to type this out every time I made a second script called script.cmd in the same folder with the line above. I've tested this technique on XP only, but others have confirmed it on Win 7.

Nathan adds: another option is to put the following code at the top of script.cmd which does the same thing in one file:

Install Clink and change the "terminate_autoanswer" setting. The settings file should be here: C:\Users\<username>\AppData\Local\clink\settings.

This then "just works" with any cmd.exe window. You don't need to alter what's running or otherwise, since clink piggy-backs on cmd.exe. 1

1 But you will need to close and reopen cmd.exe before it takes effect.
2 Original unmaintained CLink repo here: http://mridgers.github.io/clink/

If you don't need to do anything in the batch file after your application finishes normally, then using the start command ensures that the batch file is already finished by the time you press Ctrl-C. And hence the message will not appear.

I've been fighting with this desire to avoid the "Terminate batch job" prompt for a little while.

My latest epiphany is a bit of a sleight of hand (or console window), by replacing one instance of cmd.exe with another. This is accomplished by executing the command/program via start cmd /k followed immediately by exit in the .BAT file.

The original console window disappears and the replacement one can be stopped cleanly via Ctrl-C.

Consider the following example of a traceroute that can be interrupted by Ctrl+C, or allowed to complete, returning the user to the C:\> prompt:

The environment substitution of a new command interpreter may not be for everyone, but, to the naked eye, looks and works well for me.

Gringo's solution is good, but doesn't work well with scripts which pass along the argument list (i.e. python myscript.py %*), since SHIFT doesn't update %*. There are workarounds, but they have certain limitations.

Here's the modification I ended up with:

TCC/LE, which is a free CMD replacement (think of it as CMD++), has an option to suppress the terminate batch job prompt. You can find the option in the TCC Startup Configuration Dialog: 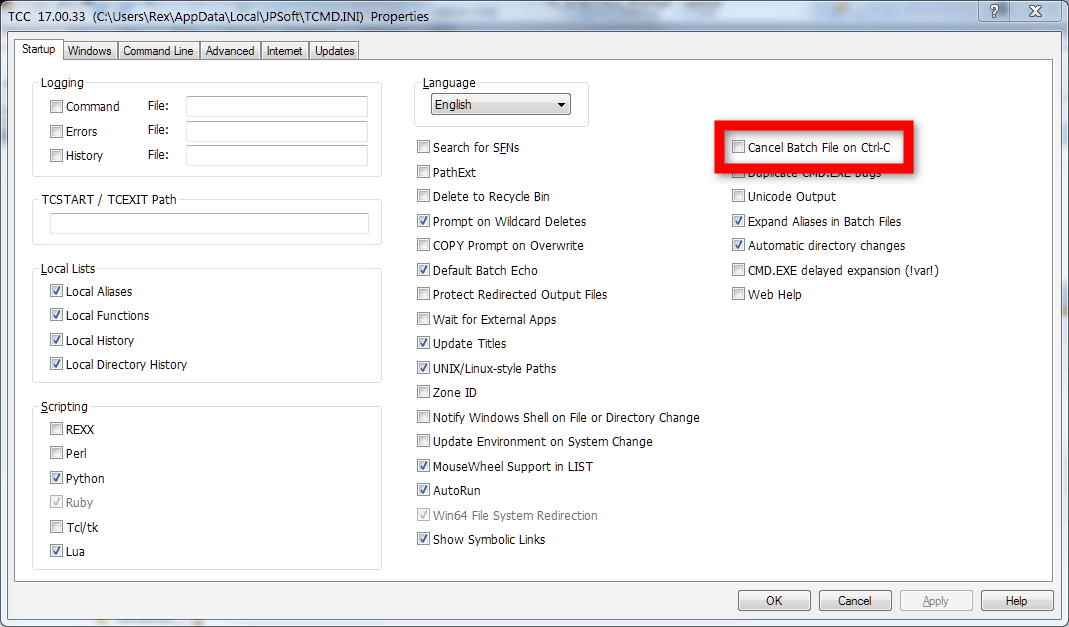 If you've never heard of TCC/LE before, here's some blurb from the site:

TCC/LE is a replacement for the CMD command line (the default Windows command prompt). TCC/LE is a superset of CMD, with 111 internal commands (CMD has fewer than 40), 240 internal variables and functions, and hundreds of enhancements to existing CMD commands.

I used TCC/LE for years and 4NT before it. I've got a lot of love for it and can recommend it. Only reason I don't still use it is because I almost exclusively use PowerShell now.

However, patching cmd.exe is not something I would do for that.

Now when you press Ctrl+D in powershell.exe or cmd.exe a Ctrl+C y Enter sequence is sent and that terminates the program.

If want to customize the hotkey, see List of Keys

If you want to apply this hotkey to another program, just add this to the script (e.g. Visual Studio Code -> code.exe):

The program name can be found at Task Manager > Details

In my case it was the ping.bat file that was right in my user directory (C:\Users\ in Vista or C:\Documents and Settings\ in XP) that was holding the batch job indeterminately.

This batch file was executed whenever I ran ping from the command prompt where the current directory is my user directory. Ping-ing from the Run window, or from other user's directory was running well.

Removed the file from my user dir and the problem was resolved!

Simply redirect the batch stdin to null by adding < nul to the end of the command.

I ran into this with an EXE that seemed to throw ^C to the parent batch on exit, causing the "Terminate Batch Job" prompt even on a clean exit.

The solution I chose to use was running the batch with "Start", similar to other answers, but from a PowerShell prompt (or via the PowerShell interpreter method from CMD, if you choose).

It's 2018 now, and in Windows 10 Microsoft has begun to supplant CMD with PowerShell as the preferred command prompt, so it's readily available in the GUI, by default.

Start is an alias for Start-Process.

When run, it just launches and returns. So when you stop the launched process, there is no "Terminate Batch Job" prompt.

By default it doesn't wait, so no additional arguments beyond the command and it's arguments are required.

In PowerShell scripts must be preceded by their path to be launched, so I run my batch file as .\host.bat.

A prime reason to suppress the "Terminate batch job (Y/N)", is to run a program in a loop (eg: re-run in case it crashes).

Easiest way to suppress the confirmation if you use the Hyper terminal, is to add the hyper-yes plugin.

At the end of your script, just add the following command:

This will not "damage" the behavior of your script, and it seems to prevent CMD to ask if you want to termininate the batch.

HenriHenri
1
1
Add a comment  |
Highly active question. Earn 10 reputation (not counting the association bonus) in order to answer this question. The reputation requirement helps protect this question from spam and non-answer activity.

0
File upload batch
1
Ending task in task manager works, but taskkill in cmd does not. Why?
4
How to pass Ctrl+C to script called from batch job
1
Batch files: Interact with a shell instance opened by a batch script in an other instance
1
How to terminate a Batch File if it is in the middle of an IF command block?
0
How to suppress Windows batch job termination confirmation?
1
Skip a command if it is stuck and continue with the next command without terminating batch job in windows batch script