no UAC prompt when opening the Services applet

My Windows 7 Ultimate no longer 'UAC prompts' me when I open the services applet (administrative tools). I can manipulate services without ever confirming the elevation.

Yes, UAC is still enabled. Yes, I've rebooted to make sure this is not due to a former UAC elevation of explorer.exe or so.

It looks like a big security hole. Does anyone have an idea about the reason for this behaviour? Or how to investigate it?

It doesn't here either, and I don't think I've ever seen it. So, the answer appears to be "It's by design."

There are lots of things you can do and change with UAC enabled. Most control panel items, device manager etc all go without a prompt.

Windows 7 provides finer grain control over UAC prompts, as opposed to Vista which only provided a Turn On/Turn Off setting.

The setting page is easily found in Control Panel:

The default setting filters out the prompt in applets such as Services: 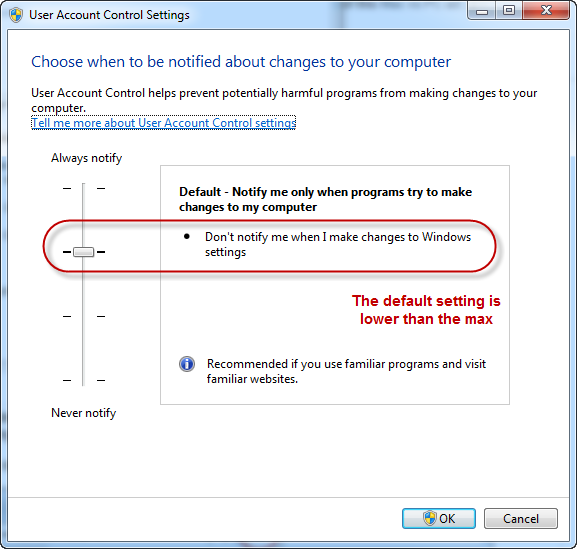 For what it's worth, here are some links about UAC.

Starting with Windows 7, certain executables auto-elevate (no UAC prompt under the default setting). They pretty much have some common characteristics, such as being digitally signed, are located in %System32% and/or are instanced from a trusted Windows executable.

This includes your Control Panel, Admin tools, and such. For example, if you download the Remote Admin Tools fro Win7 SP1 and install Hyper-V Manager, you'll notice that while it is instanced from a trusted Windows Executable (mmc.exe) it still gets a UAC prompt despite being very similar to other Admin tools, like Services.

The key is that Hyper-V manager (virtmgmt.msc) is installed into Program Files. Move virtmgmt.msc inot %system32 and UAC prompt disappears.

But to move the file in the first place, you need Admin credentials. So not really a security hole. It's the equivalent of saying that if you sudo a process it can run amok on your system and thus it is a security hole.

My guess as to why this was added in Windows 7? Because some many people complained bitterly about UAC. So much for better security.

Not the answer you're looking for? Browse other questions tagged windows windows-7 services uac or ask your own question.

0
Start a service (or services) with a double-click without the UAC prompt
8
Why does UAC still prompt me when “Run as Administrator” is permanently set?
1
Save UAC prompt credentials
0
Force a UAC Prompt to Change Screensaver Settings
1
UAC prompt for Runddll32
0
command line shutdown without uac prompt