How can I prevent sudden audio peaks while gaming?

While playing intense first-person-shooter games often a grenade goes off near my head. The problem, is that I want to maintain my longer hearing while still hear the guy who sneaks up behind me.

Is there software I could use to deafen loud blasts and amplify quiet footsteps?

Until somebody comes along with the real answer, I'll explain here (it's just better than a long thread of comments).

You're looking for a compressor. It will lower the loud signals and therefore make lessen the dynamic range of the audio signal, which means that you can turn up the overall volume.

Compressors are available as built-in effects, for example in Audacity, but also come as effect units for common effect frameworks such as Steinberg's VST. You'll just have to find a free compressor, and for VST, I guess there are plenty.

Your setup would then route the audio from the game to the effect, and then to the final output.

Given a fast enough machine, this should happen in real time. The only problem is that I don't know Windows well enough to be able to help you here. Maybe with Virtual Audio Cable? Maybe by routing it into Audacity playing in the background? Can it process live sound?

If you're still up for a hardware solution, there are compressors built into Hi-Fi A/V receivers, and outboard equipment is available too. Like this one.

In the Sound configuration, see the options of your playback device. 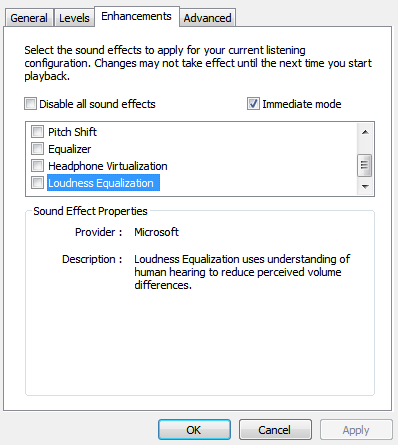 While a roll-your-own solution may be possible, there is a commercial program that operates like a far more advanced version of Windows' built in "Loudness Equalization": Breakaway Audio Enhancer is a real-time multi-band dynamic range compressor, and if the $30 USD cost is not an objection, it would be the easiest way to accomplish what you're trying to do here.

With the Audigy sound cards, back in XP, and the full sound software package, a person could create thier own "compressor" "effect" using the AGC (automatic Gain control) effect. I have done it, it can pretty seriously AVC (automatic volume control) the audio to the point of ruining a movie completly.

To do it was pretty deep, you would run the "audio console" get into the EAX effect. Yes, the same ones that were used to do the Ambiance and other useless stuff, then in Special FX, in there is a Normaliser effect. Each "effect" can have multiple filters in it. The normaliser effect has applied to it a "Creative AGCCompressor". to make my own "normaliser" I could create a new effect , and put just creatives compressor in as a filter, adjust things , and finnaly get exactally what your talking about.

One caveat, pinning it through that graph?? (processing the sound through another filter) there is a small delay added to the sound, probably around 22-30ms although I did not measure it.

Creative did not update the whole audigy package for Win7, but some users hacked up the installers so it could install the whole audio package into windows 7. Because Windows decided to put thier own junk in there , I have no idea yet what kind of conflicts and delay it would have.

On the other computer with TVtuner, We also use a AVC originally designed for television viewing and normalising of the commertials, it is a stereo analog (rca) processing box that did only one thing, take a signal in and AVC (auto volume control). It reacts slower, and varies volume by much larger quantities than a "Pro" compression alogrythm. I still use it for the computer that has a tv tuner in it. There is very little time delay when using this external analog box thing.

I am not making the hardware or the processes, but we were always analising 3-4 things when dealing with it. And the cute tech terms were not helpfull, like "attack" "gain" and "delay" I just wanted what you wanted.

1) How far out of sync did the audio get, because it takes way to long to process the audio , seperate from the video. Try to find that in the specs :-)

2) How It raises the volume back up after louder sounds, is it immediate, or slowly. There is a balance here that many "digital" things cant pull off.

3) How quick does it react to loud sound, so it doesnt blow my head off. The digital is processing the actual data before heard, could harshly clip the loud stuff, the analog not as fast.

4) How much does it gain the sound. Big balance here, sometimes it needs to gain many times the original, to normalise. Sometimes just being able to hear without having Theatre level sound.

Many of the "Pro" hardware compression alogrythms act more like clippers, are set to very short delays, can be pretty harsh on the sound, and do not work well as AVCs. Here I ID those as "compression" (the pro term) The ones that are "usefull" for volume control I call AVC. So much so that the pro "compressors" that we attempted to use for TV and video were usually worse than leaving the signal alone. They were more like fast digital sound mulchers :-)

So in conclusion there are hardware sound cards, that via software, do a Heavy AGC/AVC by routing digital data through filters. It is also possible to have an external digital or analog type AVC without the computer exisiting in the process. Both in "pro" devices, and in more consumer oriented.

Not the answer you're looking for? Browse other questions tagged windows-7 windows audio or ask your own question.