Is overclocking your CPU and GPU classified as being legal ? If so, why don't manufacturers make overclocking easier so that just about anyone is able to play around with it ? - at own risk of course.

Manufacturers are not obliged to make easy any course of action just because it happens to not be illegal. I don't know what jurisdiction you are in, but I think you'd be hard pressed to find any language in any law that states that overclocking is illegal.

I think the key is the "at own risk" - if you make overclocking too easy, people will start playing with voltages, timings and frequencies without having any idea about how they interact and what the consequences may be. At best, then, you get an unstable system, and at worst, you can destroy the hardware. For which the manufacturer almost certainly will get the blame. What company wants to make it very easy for the customer to put the company in that position?

It's legal but risky - hence why manufacturers make it difficult.

It used to be the case that chips were tested and those that failed to meet the highest specification were "downgraded" to a lower spec. (I'm not 100% sure of the process). This means that a CPU rated at 2GHz (say) is functionally identical to one rated at 3GHz. Therefore you could try to operate the 2GHz chip at the higher speed.

However, there's a good chance that the chip will fail when operated in this mode for any length of time. What the manufacturer doesn't want is you then complaining that overclocking melted your motherboard and demanding a replacement.

Of course it's legal. You can do whatever you want to your equipment.

That said, since you can damage the gear with overclocking, manufacturers are naturally going to be a bit nervous about giving you the power. There are people who don't read warnings. And there are people who will blame the manufacturer for their own stupidity. So even if they can avoid having to replace gear damaged by overclocking because it voids the waranty, they may still prefer to avoid ill-will by giving tools to fools, so to speak.

It is not illegal, it voids warranties. You are pushing the device beyond it's manufacturer support limits. If you destroy your GPU or CPU, the manufacturer won't replace it because you did something to the device that is unsupported.

It's like buying tires, but sanding the tires down to make them slicks, then your tires blow out. The tire manufacturer will not replace your tires because your did something that was unsupported.

The simple answer is that it's legal and can void warranty. However, the CPU warranty is usually really short.

Why do it: manufacturers sometimes establish pricing based on market and not the product quality. so a 3.0GHz chip justifies the extra $100 for 3.2GHz but in fact, they could be from the same batch just marked differently.

Draw backs: An over-clocked cpu is more noisy (electrical noise) which could lead to errors essentially due to misreading or data not being ready in time. It also runs hotter (more electricity consumed due to higher cycles). The consumer chips aren't designed to be run very hot so you run the risk of chip failure.

typical mitigation: Successful overclocking usually comes by slightly increasing the voltage (more kick) and increasing the cooling to take away the additional heat. A cool CPU is a happy CPU. Some old big mainframes used to run near -40 degrees.

finally, is it worth it?

Typically, no. The CPU is in most cases choked and waiting for data from RAM, Hard drive, or other IO. unless you're doing some low IO stuff (like math) the faster CPU doesn't translate into much faster PC. You're better off with a larger cache and focusing on the speed and streaming of the external bus, ram, and IO.

People who build their own computers are overlooking a major reason for anti-overclocking technology: Fraud on the part of small-scale computer building companies. When the local hole-in-the-wall PC parts place sells a computer as a "2.4GHz Intel CPU" when it's really an overclocked 2GHz part, the buyer unknowingly assumes all of the risks and cons outlined in the other answers. They did not get to make an informed decision. If that PC experiences trouble due to overclocking they're not going to realize they were cheated by the builder. It can be difficult even with the physical evidence to tell how the CPU was originally sold (since as others have mentioned the parts are often physically the same and differentiated only by testing).

You usually get a higher overclock by adjusting everything yourself (the FSB speed, core voltage, memory timings etc) as you can push the limits of stability in finer detail but you need to know what you're doing.

A 486 from around the mid 90s required moving jumpers to set the FSB, so making overclocking "easy" is a relative term; Using the BIOS you don't even have to open the case! 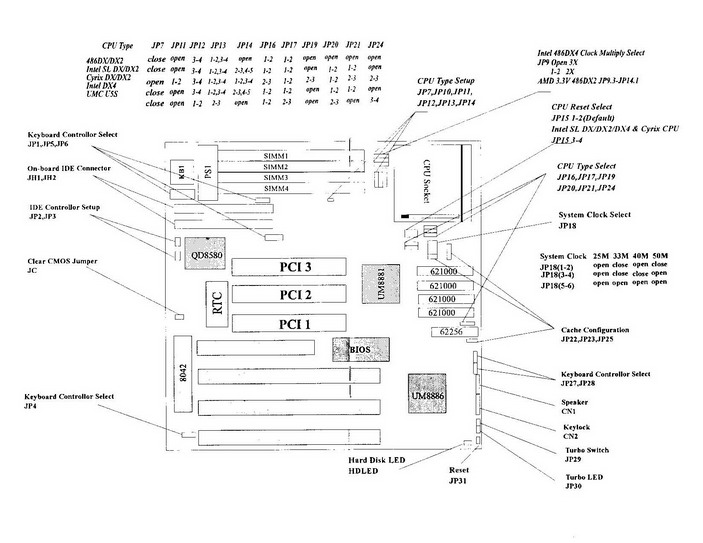 The easiest overclock I've ever used was on a PC XT that at the press of the turbo button mounted on the case more than doubled the CPU clock speed (from 4.77Mhz to 10Mhz). Whether the turbo button actually underclocked the machine when not in turbo mode is a matter of semantics, in any case it was easy.

Not the answer you're looking for? Browse other questions tagged overclocking legal or ask your own question.

3
How is CPU clock rate maintained?

1
Overclocking under Ubuntu
1
How to select a processor/memory combination for overclocking?
1
i7 overclocking problem
30
Why are modern CPUs “underclocked”?
2
Undervolting & Overclocking the Llano A6-3400M
11
Can overclocking really break hardware?
0
DDR3 1333 memory modules will operate in overclocking mode
0
The Silicon Lottery