Run a shell script on OS X without having a terminal window appear?

I'm trying to set up a few keyboard shortcuts that open specific iTerm sessions, which I was able to do with BetterTouchTool and a bit of AppleScript magic. The problem is that OS X insists to open a Terminal window for any shell script you execute through the GUI (i.e. from Finder, or as a keyboard shortcut from BetterTouchTool). The terminal window doesn't appear if I run the script directly from another terminal.

A workaround I found was to wrap the script in an .app directory, which solves the problem of the superfluous terminal window, but has some other issues (for example OS X seems to treat each resulting iTerm window as a separate app, cluttering my dock). (EDIT: this behaviour was actually caused by a bug in my script, see below)

I also tried assigning the Terminal app to another virtual desktop in the Spaces settings in an attempt to move it out of sight, but then it will just first switch to that desktop before running the script.

Is there a way to disable this behaviour completely? I already found the setting in the Terminal preferences to close the window after the script has finished, but it's still annoying to have the Terminal window pop up for a second.

Open Automator, choose Application, add a Run Shell Script action and put in your Shell command between quotes (if you have a file, you can just drag and drop it).

Other than playing it, now you can save it (as an app anywhere) and even set the icon.

Here's a quick and dirty example with almost no effort (for an app named "myapp"):

You might want to check out Platypus, which creates Mac OS X applications from shell scripts and other interpreted scripts.

Here's a small workaround, in case you fancy application launchers like Alfred. I use it every day, and I've bought the Powerpack, which allows you to run silent shell scripts. 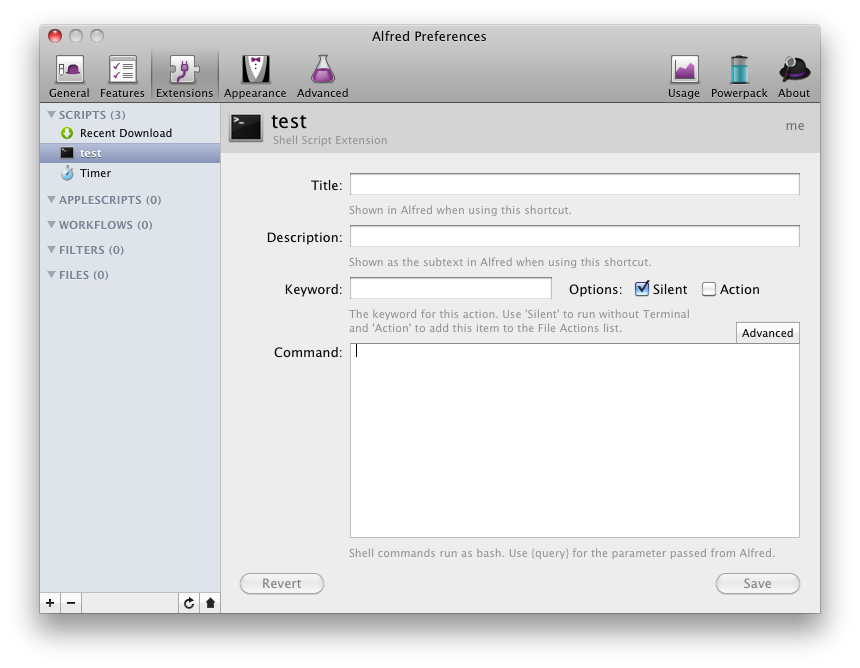 These will not open a terminal when running and can be bound to any keyword sequence. They can even include parameters, and have additional options: 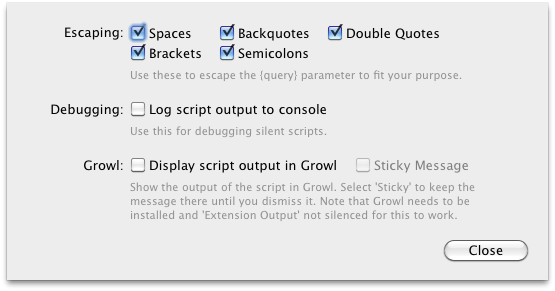 I use this for some small snippets, and it's very flexible.

If you add key LSUIElement and set it to 1 in Info.plist of your app, it will not create an icon in Dock.

Here is Info.plist of my small shell script app:

There is an other possible workout. Safe your shell script in a automator workflow. Invoke the workflow with launchd. The code is:

This will not launch any program nor show up in the menu bar and its way more silent then a Platypus app.

An even better way to execute shell scripts is direct in launchd.

will execute the command ultra silently in the background.

Here's a bit of a workaround:

Compile an applescript that calls a shell script :)

Watch out for quoting, the shell script has to be quoted properly to get past the shell you're using to compile it still intact.

But this can be run from BetterTouchTool without any whacky-ness.