Word 2010: Create a Style without a font color

Is there a way to create a Style that doesn't have a font color. The text that I want to apply the font to is already colored (different colors depending on the word), I just want they style to have the font size and background.

Styles were a big breakthrough in efficient document production in the early versions of Word, but it has gotten so complicated as to be more trouble than it is worth for most users.

In the style definition, there is a setting for "Style Based On" and one for "Style Type" -

Here you see two default styles built-in to Word 2007. Both have the font color set to blue. Here is the results of applying those styles to text where words have been individually colored:

As you can see, when the "Style Type" is "Linked" and "Style based on" is set to the Normal paragraph style, the color attribute of the style does not override any individual word colors. "Style Type" set to Character and "Style Based On" set to Default Paragraph Font DOES override individual colors.

When you define your own style you'll have choices for "Style Type" as shown here:

You should be able to get what you want by choosing Linked for "Style Type" and Normal for "Style Based On" in the style definition.

Although this is quite old but today I faced same issue & following is the solution (working in Word-2010):

Caution: Select Complete Paragraph including all the Paragraph marks associated with it.

I faced similar issue. During Copy/Paste & Applying the Style, sometimes Text color was changed & sometimes it was NOT. Answer of Dave Becker & Following Link helped me resolving this issue:

You can't actually create a style without a color; every style either has a color specified or inherits the color of its parent style. (Character styles based on the Default paragraph font style inherit font settings, including color, from the applied paragraph style.) But you can probably do what it sounds like you're wanting to do by using a paragraph style. If less than 50% of a paragraph has a particular direct formatting (i.e., formatting applied without using styles), it will be kept when the paragraph style is applied. (If it's more than 50%, you will have to reapply the colors.) A linked style may work too, but I tend to avoid those (except the built-in linked styles, including Normal and the Heading styles); they usually work fine, but they occasionally do weird things.

I had a similar problem. However, I noticed that it didnʼt happen with the built‑in character styles. Opening one of the built‑in styles and then my style in the “Modify Style” dialog box revealed a key difference. Here is an example of the latter: 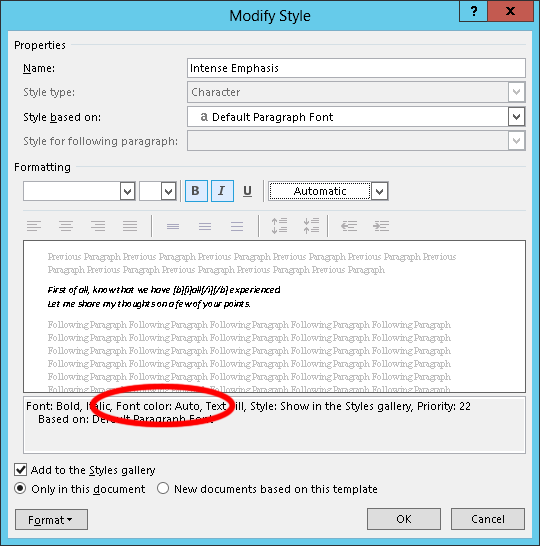 The most important part of this dialog is the read‑only text box near the bottom, which contains a summary of all the changes the style makes. Note that in this example it includes Font color: Auto. Critically, this was not present in built‑in character styles that didnʼt manifest this problem.

Unfortunately, I couldnʼt find any way of removing this through the user interface. I think this is an oversight in the design of Word.

However, there is, at least, a way to do it, albeit not a very user-friendly one. Some time back, Microsoft Office adopted file formats based on XML, so itʼs possible to dissect and arbitrarily modify them directly with relative ease. It turns out itʼs pretty easy to take out the offending colour specification.

I donʼt 100% recall if Word 2010 used the XML format, but I think so. Iʼve tested this in Word 2013; the procedure could be slightly different between versions. 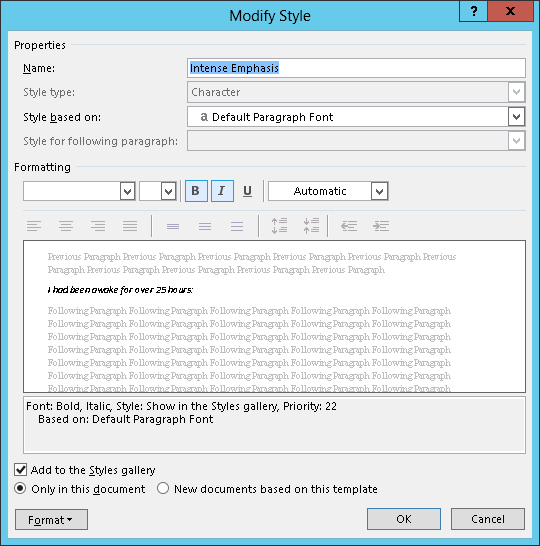 Notice the Font color: Auto is now gone. Assuming itʼs a character style, itʼs now not going to disrupt the colour of whatever itʼs applied overtop of. (I tested on text where the paragraph style had a specific colour, but I assume this would also be true for direct formatting or for a parent character style.)