What disk image should I use with VirtualBox, VDI, VMDK, VHD or HDD?

Latest versions of VirtualBox supports several formats for virtual disks, but they forgot to provide a comparison between them.

Now, I am interested about a recommendation or comparison that considers the following: 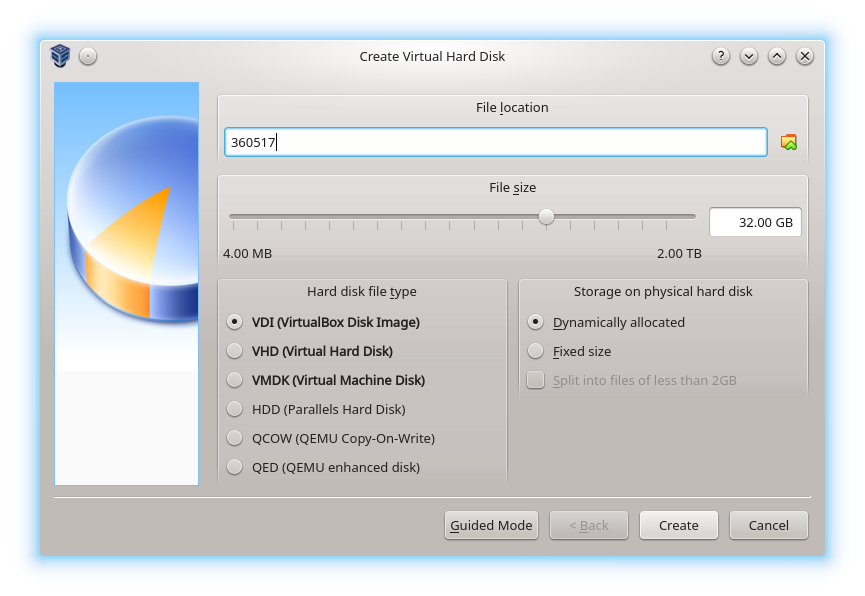 VDI, VMDK, and VHD all support dynamically allocated storage. VMDK has an additional capability of splitting the storage file into files less than 2 GB each, which is useful if your file system has a small file size limit.

HDD, QCOW, and QED have to be dynamically allocated if created in VirtualBox.

VDI is the native format of VirtualBox. Other virtualization software generally don't support VDI, but it's pretty easy to convert from VDI to another format, especially with qemu-img convert.

VHD is the native format of Microsoft Virtual PC. Windows Server 2012 introduced VHDX as the successor to VHD, but VirtualBox does not support VHDX.

HDD is a format for Parallels. Parallels specializes in virtualization for macOS. This probably isn't suitable for you, especially considering that VirtualBox only supports an old version of the HDD format.

QCOW is the old original version of the qcow format. It has been superseded by qcow2, which VirtualBox does not support.

QED was an abandoned enhancement of qcow2. QEMU advises against using QED.

Each of the formats may have nuanced performance characteristics due to how the block storage is abstracted by the format, but I haven't found any benchmarks comparing the VirtualBox-supported formats.

There are bigger factors that influence performance, such as:

I always use VDI, as it is the native format of VirtualBox; however, using a VMDK (VMWare format) will increase compatibility with other virtual machine software.

VirtualBox will run fine on Ubuntu, so if the goal is Windows/Ubuntu interoperability, VDI would be a perfectly valid choice.

Both formats will fulfill your requirements.

As for the other two, VHD is a Microsoft-developed format, and HDD is an Apple-developed format; these are both proprietarily-licensed, so limit cross-platform support; I wouldn't recommend them.

Having recently studied the VHD format, I would expect there to be at least a small difference in VDIs favor, most noticeable when you are comparing like with like, i.e. an optimized VDI vs optimized VHD. The reason is that the dynamic VHD format has these "bitmap" sectors scattered throughout the disk. Every time you modify a sector inside a block these bitmap blocks may need to be updated and written too, involving extra seeks, reads and writes. These bitmap sectors also have to be skipped over when reading consecutive clusters from a drive image - more seeks. The VDI format doesn't have these overheads, especially if the VDI has been optimized (blocks on the virtual disk sorted into LBA order).

All of my comments apply to the dynamic VHD format vs dynamic VDI. Performance tests on fixed sized virtual disks is pointless since both formats are then the same (just a plain image of a disk), they just have different headers on them.

I don't know if using vmdk would enable you to transparently run a virtual machine created in VirtualBox in VMware or not. It might. However a more universal option might be to use the VirtualBox File/Export function to create an "Open Virtualization Appliance" .ova file that can then be imported into VMware. With that approach, you can port to any virtualization system that supports .ova without caring what disk image format you use in VirtualBox.

If you need to export from the same VM at regular intervals, e.g. every day, that could be a pain. But if you only move to a different technology occasionally, it should be fine.

If you have a .vdi file already, You can test whether this works without having to create a new virtual machine. Export it to a .ova, then try importing with vmware.

It depends on how you plan to use virtual disk as well. Not every VM wants a single partition on a single disk.

VDI seems to have more options (when used with VirtualBox), but as soon as you take VirtualBox out of the picture, support for VDI becomes somewhat shaky (as of late 2014).

For instance my solutions need to have maximum cross-platform support. Mounting a VDI (such as a loopback device) on linux or Windows 7 is harder and buggier than you might expect. Almost like the VDI has too many features, making it difficult to make fully conforming utilities that can operate on it.

Even though I use VirtualBox 90% of the time, those few times when my disks become unaccessable in certain workflows have led me to favor VMDK for pluggable/shared filesystems.

Disk image files reside on the host system and are seen by the guest systems as hard disks of a certain geometry. When a guest operating system reads from or writes to a hard disk, VirtualBox redirects the request to the image file.

Like a physical disk, a virtual disk has a size (capacity), which must be specified when the image file is created. As opposed to a physical disk however, VirtualBox allows you to expand an image file after creation, even if it has data already; VirtualBox supports four variants of disk image files:

VDI: Normally, VirtualBox uses its own container format for guest hard disks -- Virtual Disk Image (VDI) files. In particular, this format will be used when you create a new virtual machine with a new disk.

VMDK:VirtualBox also fully supports the popular and open VMDK container format that is used by many other virtualization products, in particular, by VMware.[25]

Image files of Parallels version 2 (HDD format) are also supported.[26] For lack of documentation of the format, newer formats (3 and 4) are not supported. You can however convert such image files to version 2 format using tools provided by Parallels.

A good reason for me for using vmdk is that Virtualbox (at least until v4.1) using VDI format has the tendency, over time, to fill the complete allocated disk space, even though the internal virtual disk usage is still much less. With Virtualbox using vmdk disks, this seems less of a problem.

But I'm talking years uptime. This might not be a problem many people encounter.

Apparently VMDK is a lot faster than VDI. I don't understand why, maybe I made a mistake somewhere.

Then I ran hdparm -tT --direct /dev/sda on the images. For each of the "runs" I switched replaced the "Machine -> Settings -> Storage -> Controller SATA -> ImageFile.xxx". The raw partition on SSD370 was defined by a VMDK file, so it's not really an image.

These are the results:

I don't really know how to interpret this, maybe somebody wants to leave a comment on it. I chose the VMDK then.

VDI is much easier to compact if the VM grows too large.

A long time ago i did one test, convert dynamic vdi into dynamic vhd just to test speed and file sizes.

Remember it was an inmutable Windows guest clean os install with some apps, remember for my test i convert one format to another, so both are suposed to have the exactr same image, like doing a cloning.

For a disk size of 64GiB, the VDI file size was arround 18GiB, while the file size of VHD arround 22GiB.

I can remember i saw theese two things:

That was long time ago and test was done on an HDD, but i ensure both files where defragmented and next to each other on the fast part of the disk.

Hope someone can do real SSD tests, but my feeling is that VHD is faster (and bigger) than VDI.

Just a tip: VHD/VHDX can be compacted diretly on any Windows 7 and Up by using DiskPart command line tool, for VDI there is needed an external tool CloneVDI.

Sorry i did not test VMDK, i did not know how to compact it without changing its UUID (the disk UUID), remember VBOX command tools allways change it on every clone, no matter what format you use.

Not the answer you're looking for? Browse other questions tagged virtualbox disk-image or ask your own question.

30
VirtualBox and SSD's TRIM command support
0
How is the performance of a virtual hard disk (in Virtual Box) formatted in HFS+?