I have a Lenovo Thinkpad T420. I use it in three situations:

In all three situations, my screen resolution gets adjusted automatically, and the monitors (or monitor) appear as they should.

The problem is that, in the first situation, the desktop gets extended to a third monitor (VGA) even though no monitor is plugged into that video card. I have to manually turn off "Extend desktop to this display" or my cursor gets lost in this region of my desktop.

Is there any way to prevent this from happening? It never happened until I moved my workstation from one part of the room to another, which involved unplugging everything and re-plugging it back in. 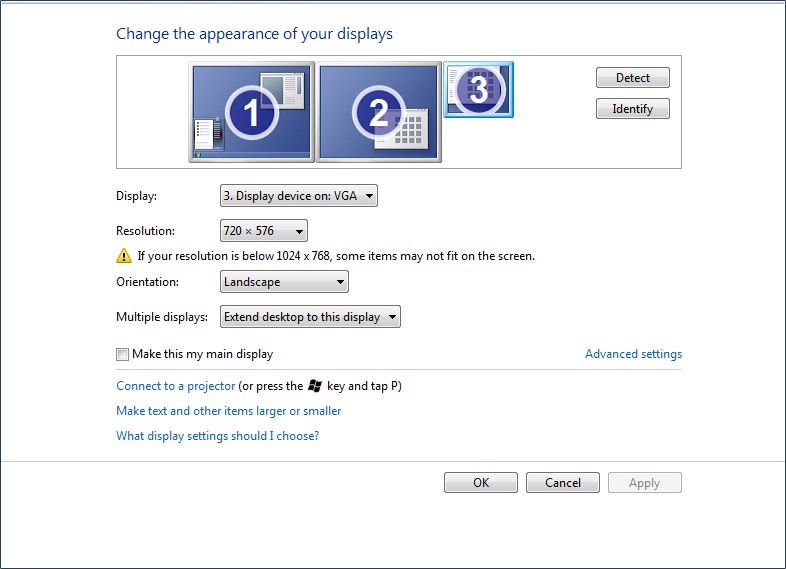 Settings after turning off "Extend destop to this monitor"

Why won't it remember this? 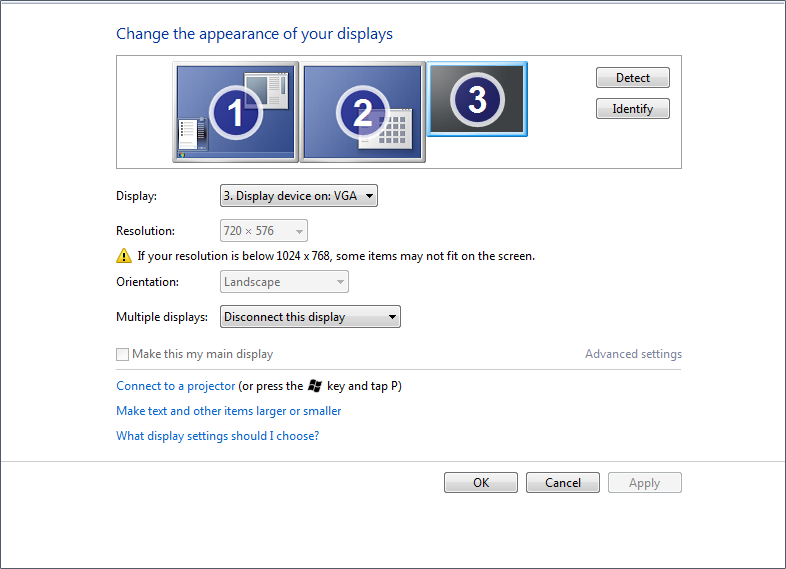 Screen capture of my display settings for situation #2:

Monitor #1 and #2 are reversed. Could this be the reason for the problem? 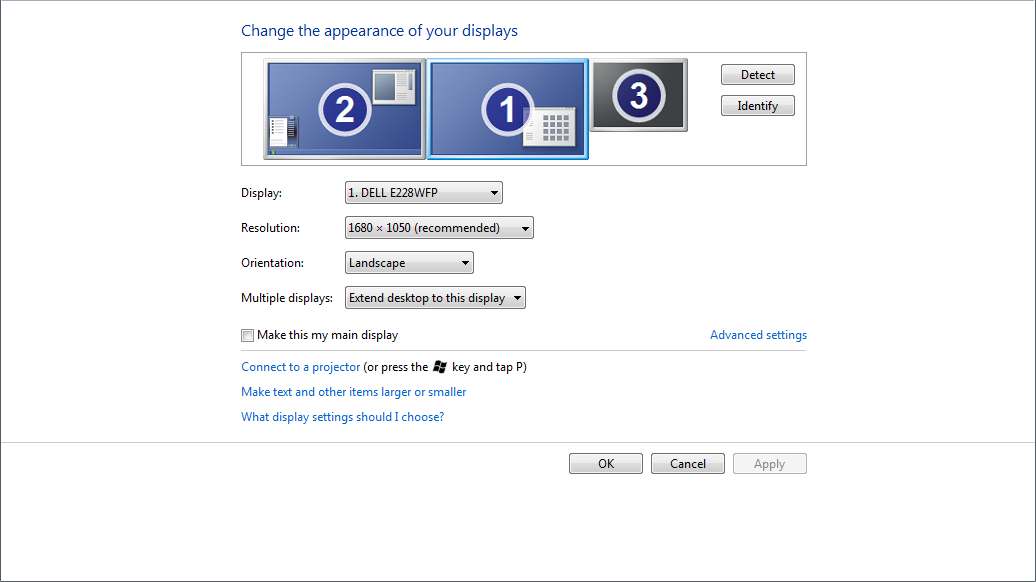 As far as I am aware, there's no way to force Windows 7 to not use settings it autodetects from the graphics hardware. This is fundamentally the same problem as How to disable monitor auto detection in Windows 7? -- it appears Windows thinks what the hardware says is more important than what the user says.

In some ways, this is better than how things were done in previous versions of Windows -- namely, because plugging a Win7 machine into, for example, a projector works as a user would probably expect in all cases. That is, the projector is initialized and treated as a screen without digging through the control panel.

Unfortunately, such things do result in cases where the auto detection goes wrong, but Windows doesn't seem to provide any sort of override switch for this, which is unfortunate.

Something seems to be making the graphics there believe a third display is connected; you may wish to see if blowing the connectors out with gas duster has any effect, both on the actual VGA connector and on the dock connector (male and female sides for both connectors).

One last thing, for your Lenovo specifically, the most recent Intel HD3000 driver updates available on their website have this in the changelog (emphasis mine):

[New functions or enhancements] Nothing.

This isn't exactly your issue but installing the update may help anyway. If you have a discrete graphics card in your particular configuration, also check to see if an update for that is available (my machine is an X220 so I'm not familiar with the discrete graphics options available on the T420...).

I had a similar problem where I used different external screens/projectors and couldn't get my display at home to work since Win 7 recognized the display as the big plasma I had used earlier.

It would really seem that there is no internal solution within Windows 7 which is quite retarded. However, check if there is any sort of override key combination for your graphics card.

I use an internal Intel chip with my laptop, and it overrided the automatically recognized screen settings by pressing Ctrl+Alt+F3. After that I got my laptop screen to show the desktop and from there I could set the settings for the external display.

No clue if this helps, but thought I'd share.

I wrote a script that sets the resolution to what you want when you run it using ResSwitch. It's not a good solution, but it's better then nothing. You may need to edit the script if you have multiple monitors.

I had this problem and it was because NVidia ignored windows settings. Once I always used nvidia panel to adjust my setup I've never had a problem. Nvidia also remembers different setups for those rare occasions when you dont connect all your monitors.

Not the answer you're looking for? Browse other questions tagged windows-7 windows multiple-monitors thinkpad or ask your own question.

34
How to disable monitor auto detection in Windows 7?

10
Why won't Windows save my multi-monitor settings?
3
dual monitors on remote session
0
windows 7 screen edge wrong after remote desktop
1
Maintain window placement on monitors after reinserting to dock
1
Three monitor setup: Two are duplicate after reboot! How do I fix this?
1
monitor connected to vga connector not showing native resolution with AMD graphics card