I have an Intel DG965RY motherboard and its specification says it supports 8GB with 533 or 667Mhz RAM sticks and only 4GB with 800Mhz RAM sticks. I am running a 64bit OS.

It would be a bummer if I will specifically need 667Mhz sticks thinking that at the worst they will underclock and then run at 667Mhz. I tried this because I saw someone posted at some forum that he put in 4GB+ of RAM in the same board @ 800Mhz and the system uses it all.

In my case (On Ubuntu), it only shows 3.2GB as of now (link to Question) so needed to confirm if this is a hardware limitation. 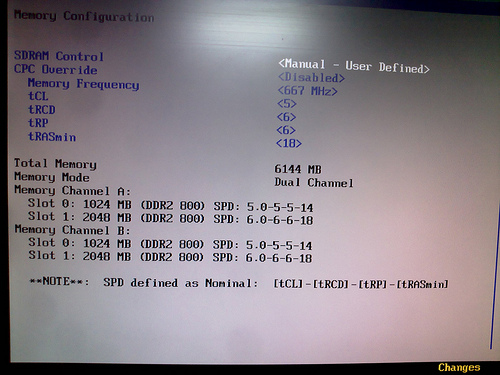 From your question on the Ubuntu site, I see in your lshw output that your 2GB DIMMs are Nanya NT2GT64U8HD0BY-ADs.

From the data sheet for those ([PDF] http://www.nanya.com/NanyaAdmin/GetFiles.ashx?ID=435):

2 rank addressing == they have two ranks == they're dual rank.

From the motherboard spec: "Double-sided DIMMs with x16 organization are not supported." http://www.intel.com/support/motherboards/desktop/dg965ry/sb/CS-026602.htm

I'm not sure what that means, but I see there's a confusing tradition of describing dual rank memory as "dual-sided" or as having a lot of chips (http://en.wikipedia.org/wiki/DIMM#Ranking).

'JEDEC decided that the terms "dual-sided," "double-sided," or "dual-banked" were not correct when applied to registered DIMMs.' Oooh, tantalizingly close to just putting a consistent naming standard right into the spec.

Why can't Intel just give the numbers of rows/columns/ranks they support? Are the specs written by tech writers who don't know any better? (that idea is kind of silly... A couple seconds of googling found me a nice presentation on DIMM addressing: http://www.ece.umd.edu/courses/enee759h.S2003/lectures/Lecture3.pdf).

So yes, this is a hardware limitation : Since all your sticks are at 800Mhz, then your usable RAM is limited to 4 GB, which is what you are seeing. The 3.2GB are probably what is left after device memory was allocated.

I see no other solution (apart from changing the motherboard), except underclocking to 667Mhz some or all of the sticks. The manual is unclear as regarding the mixing of RAM sticks, and my understanding is that you only underclocked the 2GB sticks while leaving the 1GB at 800Mhz, so you might need to underclock all of them.

Note: By "underclocking" I mean getting 667Mhz RAM sticks, rather than lowering the frequency through the BIOS. Going by your screenshot, changing the frequency does not still prevent the BIOS from detecting the sticks as being 800Mhz in nature.