How can I make the Windows 7 taskbar behave like a cross between the old Quick Launch and new Superbar?

I really like the taskbar in Windows 7, I think combining buttons to launch apps and the icons that show your running apps is groovy. However, because I like having as much space as possible, I've got small icons enabled and shrunk the bar down to one row. I've also told it not to group the running apps unless there's no space left (to save me having to work harder to find the particular window I want), which also means that they have captions, and are thus quite wide.

The (admittedly small) problem this gives me is that I can pin all my favourite apps to the bar, which looks much like the old Quick Launch bar, but when I launch them the running apps because much wider, and the unlaunched apps get lost amongst them. I can manually change the order to fix this, but next time I'll launch a different app and I'll be back to square one. What I'd prefer is for small unlaunched icons to be kept on the left, and wider running apps to move over to the right, which for me would be the best of both worlds. Is there any way I can organise that?

I'm aware that one can use the traditional quick launch bar in Windows 7, but that's not what I'm after; I generally prefer the Windows 7 way.

EDIT: To clarify, I'm specifically not looking for a solution like the one described here - http://www.sevenforums.com/tutorials/888-quick-launch-enable-disable.html. I'd much prefer generally standard Windows 7 behaviour, just with a more sensible (to my taste) grouping of icons.

This is what I don't want:

This is what I do want, automatically:

Windows 7 does not use a Quick Launch toolbar. The new way is known as Pinning to the Taskbar. However, you can emulate the traditional Quick Launch feature by doing the following:

I know this is not the solution to your problem, but I discovered the Windows 7 Taskbar Tweaker that may be a partial fix. 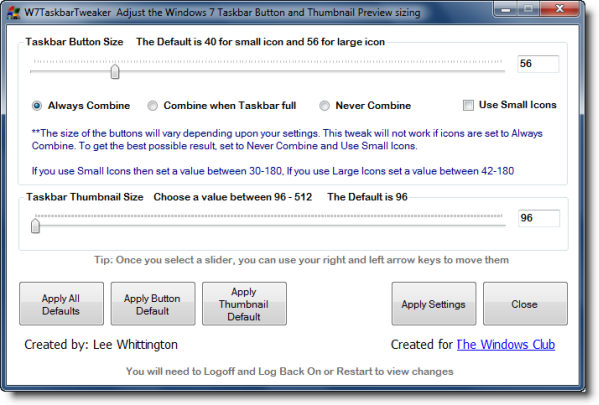 You can set the width of the buttons to a much smaller size of say 75 or 100px (default is 150px) in order to free up space when you have lots of programs running and before having to combine. It also allows you to change the taskbar thumbnail size, if that catches your fancy.

Not the answer you're looking for? Browse other questions tagged windows-7 taskbar quicklaunch or ask your own question.