Why are USB ports oriented differently on different devices?

For example on one machine the ports have the empty side on the left and on another it's on the right. Why don't manufacturers make this consistent?

There are two simple reasons. First, there is no defined community standard. Each manufacturer makes their devices however they see fit. So, ports are put wherever they desire.

The second reason is because designers of devices, especially small ones, must first lay out their circuit boards and other internal components so that they can squeeze as much hardware into the smallest amount of space. Ports are a major part of that process, but there is also a bit of aesthetic trade-off when it comes to laying out all the hardware in the smallest footprint possible while also remaining functional.

Most USB receptacles are mounted to a circuit board, and in general, the "empty" space in the connector is on the side towards the board. This seems to be the de-facto standard construction (if not an actual standard) of PC-board-mount USB connectors, just like D-SUB connectors always have the narrow edge toward the board, and dual PS2 connectors always have the keyboard connector towards the board. (Hint: this is useful to know when blindly connecting cords behind a desk.)

When a USB cord is plugged in, the USB icon will be "on top" of the connector, if the board is toward the bottom. Likewise, the indicator LED on a USB thumb drive will be "on top."

The difficulty is that some manufacturers (AHEMDellAHEM) seem to always orient the assembly so the circuit board is above the connector when the PC is in normal orientation. This means that the device plugged into the USB connector will be upside down, so you cannot view the indicator LED.

What I find even more irritating is that USB connectors are allow a limited amount of space for the plug; most thumb drives and many cables are unnecessarily fat so plugging them in blocks other, adjacent USB ports.

As already pointed out, specs are not always followed, especially with something as ubiquitous as USB.

But an important point is also that specs are not always clear and precise, and are left open to interpretation.

This means that you can't rely on anything.

However, I presume by "empty side" you're referring the following:

This is actually somewhat covered by the USB spec. Section 5.3.1.1 of the USB 3.1 spec has the following image: 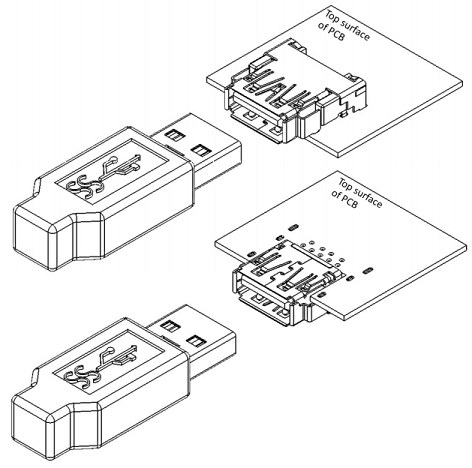 This implies that to be "fully compliant", the connector must be mounted with the "empty side" (as you put it) at the bottom... in relation to the PCB's top/bottom.

I say implies because I can't see any specific claim that to be compliant, you must use these orientations, and in fact the USB 2.0 spec omits the example PCB footprints entirely.

To be honest, every connector I can think of follows the rule above, excluding only some Micro USB connectors which have been mounted upside down, notably by Samsung on phones including the S4.

Unfortunately this then leads you on to ask "what is the top-side of the PCB?" - a question that from the outside of a product can be difficult to answer.

These things aren't consistent because there are too many things at play here.

Take the S4 example I gave above... perhaps the engineers working on that PCB considered the "top side" to be the side facing away from the user - it would make sense, as lots of the components are mounted on that side to leave a flush bottom side against the display module.

The USB Icon on the plugs provides tactile feedback making it easy to obtain proper orientation.

However I couldn't find anything about receptacle orientation and, in practice, not all receptacles are marked with the symbol.

Because there is no need for that... It doesn't matter I guess, since I can't think of a device that may have a problem if attached in either sides. So why would they (manufacturers) do that??

I bet they would all agree that there should always be one side that is empty. They just wouldn't agree which side that would be.

Setting conventions in a large market full of established players is hard. Perhaps a job for ISO or IEEE.

While there are not standards (as others have said) and there are certainly exceptions to what I shall now claim:

Add-in cards may not abide by this, and Apple USB connectors seem to have the connector seams on the opposite side from normal, but for the most part, my observation is that 90% or more of USB devices I've worked with have been oriented this way.

In the USB 3.1 Legacy Cable and Connector Revision 1.0 document it says:

USB 3.1 receptacles should be orientated to allow the Icon on the plug to be visible during the mating process.

This means for devices lying on a surface it's unambiguous, but for vertical USB ports it might leave some room for interpretation.

The specification states that the USB logo shall be on the "topside" of the connector.

For full-size connectors, that standard is widely (though not universally) followed.

But what are you going to do? Call up and complain that a company's cable isn't "real" USB because it's out of spec? They might give you your money back, but they won't recall all of their cables.

1
USB ports not recognizing devices (vista)
1
Do certain usb ports work better on my IBM T60?
1
Why are my USB 2.0 devices hanging Windows XP?
10
A computer that fails to boot if certain USB devices are plugged in
2
USB 3.0 port no longer recognizing USB 2.0 devices, seems to still work with USB 3.0 devices
157
Why do modern computer cases still have USB 2.0 ports?
1
BenQ Monitor USB Ports Not Working
15
Why are USB ports sometimes referred to as serial ports and called COM?
1
Why do my USB ports malfunction after Windows 10 update?