How can I force an internal hard drive to power on or off when I want?

Obviously there are power management settings which Windows uses to determine when to power a hard drive off, and when to power it back on again. Powered down I assume doesn't mean absolute zero power, but it does mean the disk stops spinning.

I have a second hard drive which is a tad noisy. In fact, having invested in a new case, CPU cooler, power supply and fan-speed controller, it's now the noisiest component left in my computer. And I've kinda run out of money.

But... I don't need a second hard drive all the time.

So - is there a quick-and-easy way to make Windows unmount all partitions from a particular internal hard drive and power that drive down on demand, and then make it power the drive back up and re-mount the partitions when I'm going to need it?

I dual boot, so I really need the answer for both Windows XP and Windows 7.

To have Windows not randomly access the drive, all you should need to do is make sure that indexing for the drive is disabled. This, combined with the power management settings, should keep the disk quiet until you manually access it.

I used this method to keep my external drive that I use for backups quiet at all times, unless it's actually backing up data.

To make sure indexing is disabled, you just go into your Indexing Options window by clicking the start menu orb and typing "Indexing Options" and hitting Enter. A window that should look like this should pop up: 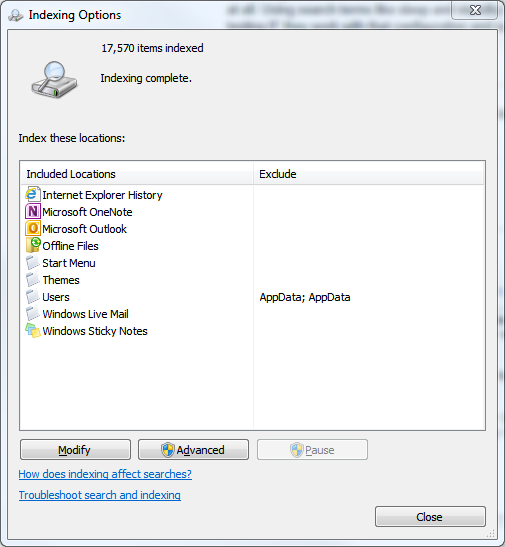 Then just find the entry corresponding to the drive you want to keep quiet and remove it from the list by clicking the Modify button and then unchecking the drive in the list that comes up.

As an added safeguard to make sure it won't index it in the future, go into My Computer and right click the drive and then choose Properties. On the bottom, you should see an option with a checkbox called "Allow files on this drive to have contents indexed in addition to file properties": 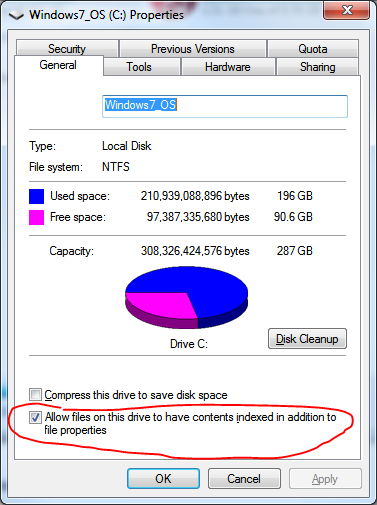 Uncheck that option and click OK. Your drive should stay quiet until you actually call upon it, and you won't need to unmount/remount it manually.

You can configure both OS's to turn off idle disks via the Power Management options of the OS. 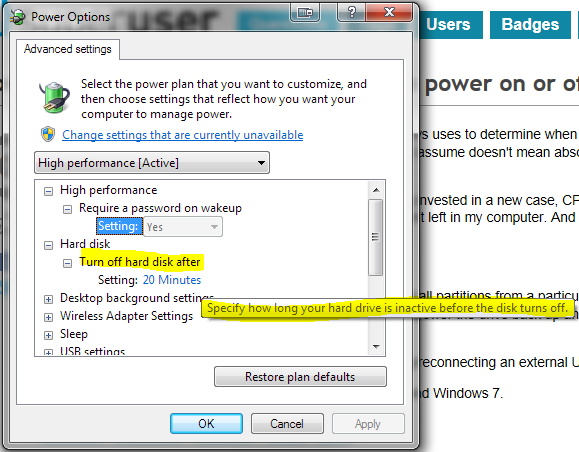 If you want to be able to force a full power off on the drive(s), then you'll need to wire in a physical switch, as the Power Supplies in PC's don't allow controlling power taps via software.

More info (based on new requirement laid out in comments):

Perhaps check out MS' article "Mount or dismount a drive" for some ideas. Also check out the Windows mountvol and fsutil command-line utilities, to perform the same task(s) in a less 'clicky', more script-able, way.

In the end, I finally solved this problem by buying a hard drive drawer/caddy.

The drawer with the hard drive doesn't need to be removed to disable the drive - a lock on the front can be turned to the off position. At the moment, a quick reboot is all that's needed to enable/disable the extra drive. If I enabled AHCI in my BIOS (usually associated with SATA RAID, I think) I could even enable/disable the drive with the machine powered on, a lot like external hard drives. The reason I haven't enabled that - although Windows 7 has AHCI support built in, I dual boot and Windows XP needs drivers, and I haven't got around to installing those yet.

(I did try installing the drivers in Windows XP, but the only way to enable AHCI in the BIOS is to enable RAID. When I did that, I discovered I'd have to reformat all my hard drives - my main system drive included - to use RAID. This hasn't yet been worth the hassle of re-installing everything again. I consider it a bit freaky that just in order to support powering a single drive on/off while the system is running, I have to not only reformat that drive for single-drive "RAID" but also the system drive which will always be on anyway. Still, it's probably a limitation in my BIOS rather than an inherent issue with AHCI - Asus/Asrock has wrongly assumed that the only possible reason to power on/off an internal drive while the system is running is when you're using RAID.)

(I now have a new motherboard (Asus ASUS M5A97 Evo R2.0), and AHCI works fine in both Windows 7 and Windows XP. There's a BIOS setting (per internal SATA port) to enable/disable hot plugging. With that enabled, I can "eject" a hard drive in Windows just like a flash drive. No reformatting needed. Works well for eSATA as well as for this drawer.)

On the noise issue, the drawer has a small and noisy fan. This is fairly easy to disable (a cable can be disconnected), but my drive gets slightly warmer than I'd like that way. So with the second hard drive powered on, my system is noisier than it was before. But that's quite rare, and with the drive disabled (even with the drawer in place) my system is quieter.

I bought a second drawer so I can swap in another drive, but I don't have another drive to swap in at the moment - mostly this is just a way to get a hard-drive on/off switch on the front of my case.

I have no idea how this particular caddy compares to others, but using a similar caddy may just be a workable solution for other people too.

You can use HDDScan to turn your drive off. Select your hard drive, then Tools, Features, Spindown.

You can also generate a batch file which runs HDDScan with parameters so it turns your drive off. To do so, select your hard drive, then Tools, Command, check the Spin Down checkbox, then click on the floppy disk icon to save the batch file.

Note that this does not unmount the drive. When any program tries to access that drive, it spins up again. It also spins up again on a reboot.

Most worthwhile consumer-available enclosures (standard or RAID) have on/of switches. Shouldn't matter if it holds one or multiple HDDs.

I use an external SATA RAID Bay and buy them when they are cheap on Newegg. one of them is Sans Digital Towerraid which supports eSata (think the newer ones also offer USB 3.0 capabilities. It came with an eSata card for Mac, Win XP/Vista/Windows 7 and software. While it is intended to be used as RAID, the software and guide go into great detail on the different RAID options and then the option to not do RAID.

For Black Friday, I snagged a Mediasonic HFR2-SU3S2 RAID Bays USB 3.0 & eSATA PRORAID Box 4 Bay Raid Enclosure with a USB 3.0 PCIe card. The design of this one is slightly more cumbersome than Sans Digital, so the drives that I put in there are usually ones I want to stay in there. Sans Digital ones make it super easy to hot swap HDDs.

It's recommended to used HDDs with the same RPM speed, otherwise the HDD with the slower RPM is going to be more taxed and it will likely have a shorter life span or be more likely to have problems.

One Raid Bay enclosure has the items I want to share on my network for entertainment (movies, music, etc.) and connected to my Mac, the other Raid Bay enclosure is connected to my Windows 7 and for file storage/access I do graphic design and photography so I have many HDDs partitioned for the way I want them organized. I set up scheduled drive back up using the software. I network the Mac, PC running Windows 7, and laptop running Windows XP along with laserjet home office printer, set up file sharing, and then if I don't want certain hdds on, I just go to whichever RAID enclosure and turn off the power switch.

They have on/off switches and even have their own fan for cooling. Sounds like maybe the secondary drive is starting to exhibit symptoms of inevitable hdd failure quite honestly. Mac OS has mount/unmount ability. Though the mounting doesn't seem to work as I thought it should for internal hdd. I usually have to reboot to get the drive I unmounted accessible.

In my humble opinion the time spent on figuring out a solution could have been used to find compatible drivers for what you needed.

It is possible to put a HDD into offline mode (and then back online) through the Windows "Disk Management" "snap-in", the option is in the context menu of the HDD item, leftmost cell.

I guess it can be done through command line as well.

Not the answer you're looking for? Browse other questions tagged windows-7 windows-xp hard-drive power noise or ask your own question.

0
Can I turn internal storage hard disks on and off individually?
25
Immediately spin down a HDD on Windows
0
How to power off a secondary internal hard drive using software?