What are the different types of Cherry mechanical switches are out there, and what separates one from the other?

Also, where would I be able to test one out?

First, be warned: all mechanical keyboards are going to be substantially louder than typical rubber dome keyboards you may be familiar with. However there are "quieter" mechanical switches.

I've attempted to summarize the most common Cherry switch information in the below diagrams derived from the original overclock.net thread. That thread has a lot more detailed information about each switch, so definitely click through to learn more.. 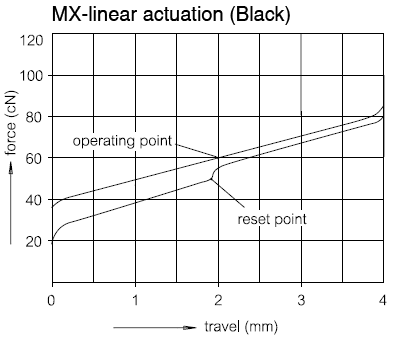 No tactile bump when key actuates. Considered by some to be better for "gaming" than typing for that reason, but I think it's personal preference. 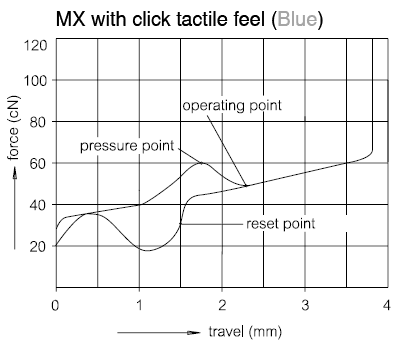 Very commonly used on "clicky" mechanical keyboards. For example the Das Keyboard and Razer BlackWidow use this switch. It's a fine switch but quite loud in my opinion, so be careful! My wife complained when I had keyboards using this switch in the house.. 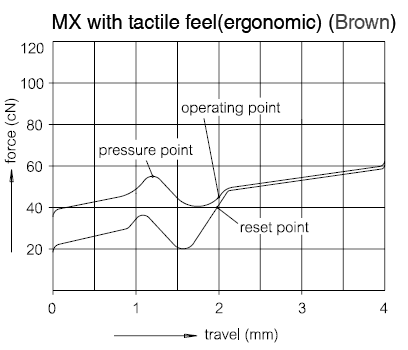 I've tried this switch and IMO it is basically a Blue without the extra noise. For example the Das Keyboard S (silent) uses this switch. 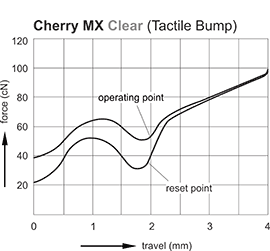 This one, for what it's worth, is my personal favorite. Considered a "stiffer, slightly more tactile brown". It is not a huge difference but I prefer it over the brown and it is much closer in feel to a quiet blue in practice. 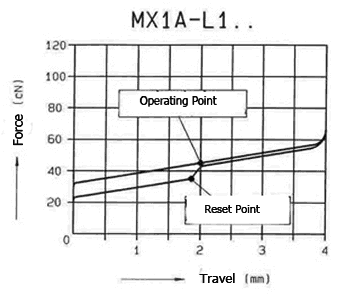 Rare variant of Cherry Black, also no tactile bump but with different parameters. Available on the Corsair Vengeance K60 and K90, though.

I now own one of these keyboard switch testers: 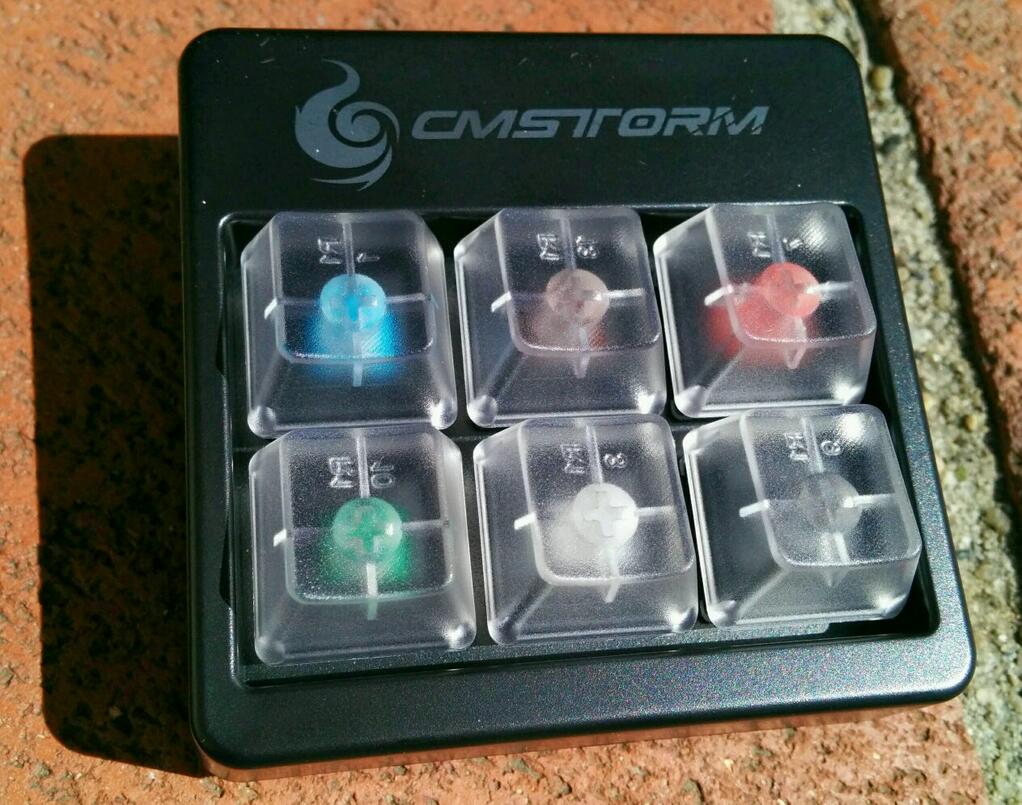 You can think of it this way: 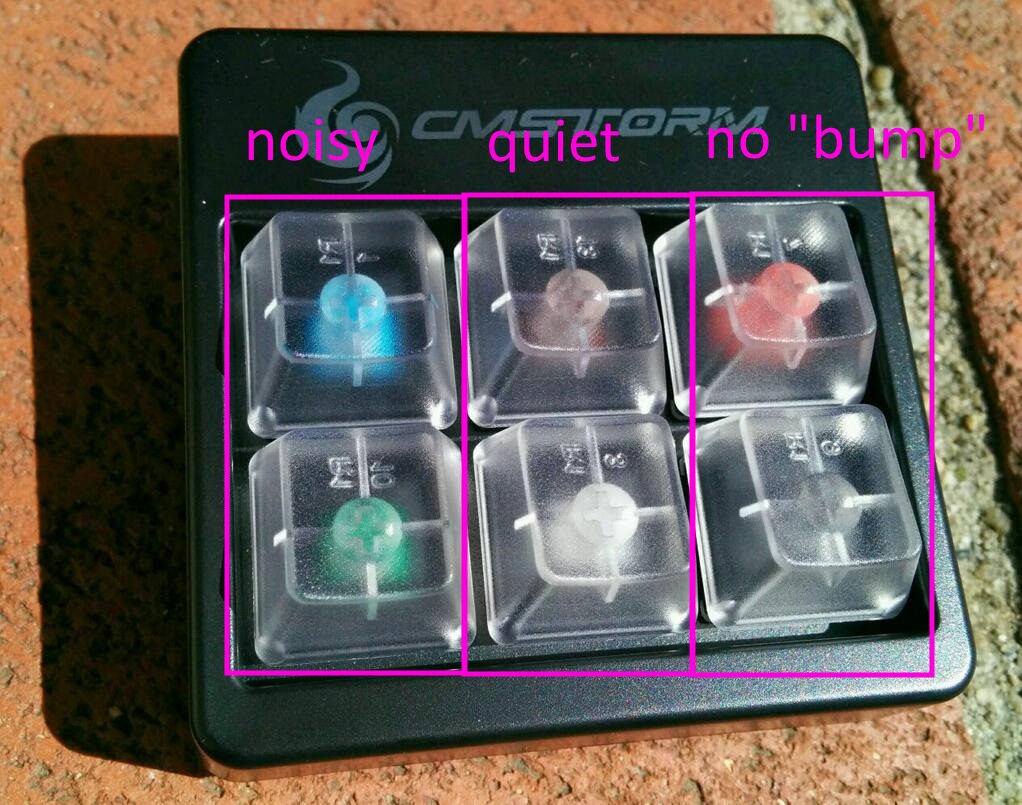 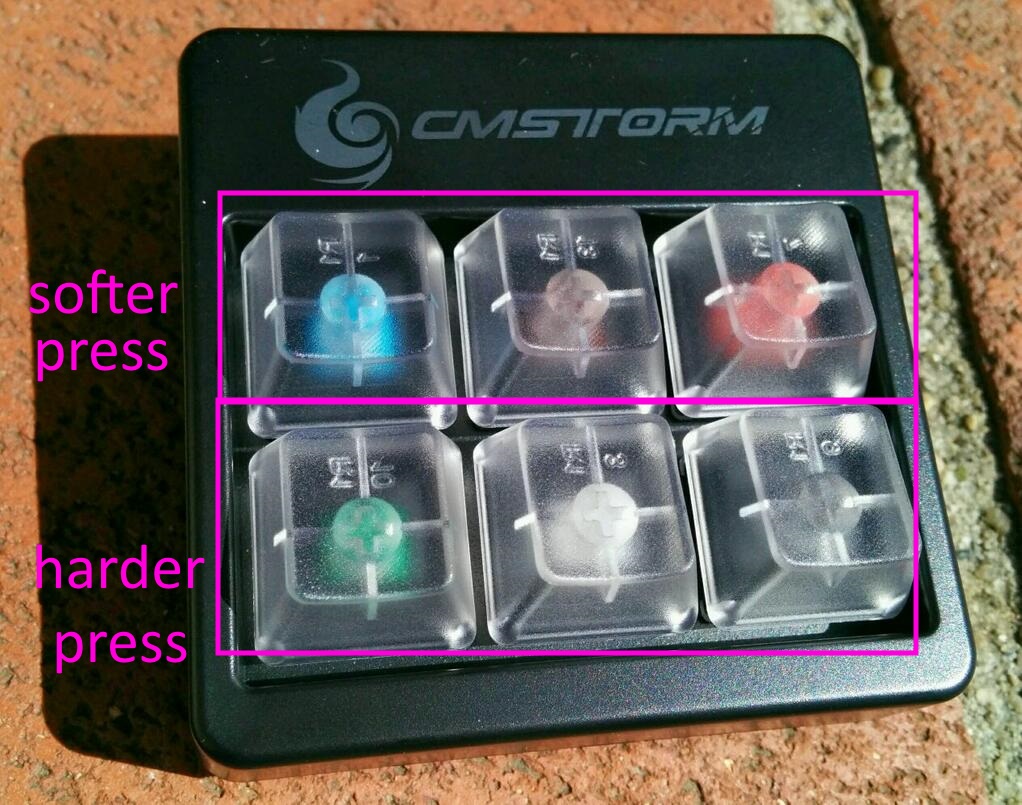 Since the original answers were posted, there's been significant changes in the mechanical keyboard market, partially because the patents on the cherry switches have run out.

Since Jeff's answer, there's multiple new versions of Cherry Switches - Which kinda tend to be either heavier (the Cherry Green and White variants), as well as multiple boutique, top tier and mid tier manufactures. There's even a manufacturer who builds new build Model F keyboards, that use an older design of buckling springs than the classic model F

Most 'socketed'/solderable switches tend to be broadly compatible with cherry switches, but if you're planning on customising a keyboard, its worth doing your homework first.

A good many 'mainstream' keyboards may contain switches made by Kalih, Omeron or Geetech, that may be either badge engineered, or made to fit the manufacture's specifications. There's a non exhaustive list of switches and their characteristics on wikipedia

There's also low end keyboards with 'off brand' mechanical switches at around the price range of a decent membrane, though your mileage may vary. I've been trialing one with a brand of switch I have never heard of and it has a few keys that misbehave

Quite a few enthusiast sites sell key testers, or assorted sets of switches if you want to test it.

I'd REALLY suggest trying the keyboard before buying it if you can, since there's a lot of variation. Unfortunately, the best way to test a keyboard really, is to find someone with one, or hope for a demo model. The one I have bought had a window to press the arrow keys and felt good.

I do think mechanical keyboards are the bees knees (and often quite well made to boot), so, as long as you do your homework, you probably will find the right keyboard.

That said, I use a BlackWidow Ultimate, and the major issue I have with it is it makes every other keyboard I have feel crappy - mechanical keyboards are AWESOME in my opinion. In addition to OCN, I've found geekhack has a really good guide to mechanical keyboards.

My experience with Cherry blues is, as with any mechanical keyboard, you need to unlearn some membrane keyboard bad habits, such as bottoming out keys, but once you do, it's fast. They aren't also mushy, which to me, even the best laptop and membrane keyboards are in comparison.

The loudest, supposedly best keyboards are based on the model M keyboard and use buckling springs. Only Unicomp makes them, and they use a buckling spring design. These need quite a bit of actuation force.

Cherry makes four different types of switches, and most mechanical keyboards seem to be based on "Click Tactile" is Blue or "Ergonomic" which is brown. There are three other types - "Soft Tactile" which is clear as well as "Linear" is Black and Red. "Ergonomic" is Brown. Tactile keyboards don't have a linear force curve - you feel a point where the force of the key you press changes, and you can release the key then. The keyboard I have is loud and clacky, but there's a stealth version with Cherry browns. With most smaller keyboard makers, you can probably specify which switch type you want, apparently - so if you're going for a quieter mechanical keyboard, Cherry browns are a good bet. I like the clackyness, since I often touchtype, and it's oddly reassuring. Once you've gotten used to it, the low actuation weight and the activation point being midway through the stroke, least to me makes a big difference.

Practically most mechanical keyboards I've seen tend to be Cherry MX Blue (clicky) or Brown (silent), though there's some alps and topre ones - for example the happy hacking keyboard uses Topre capacitive keys IIRC, which are nicer than your standard membrane keyboard and are worth looking at for silent keys.

I prefer clicky keyboards since, well, I use the noise to tell when I hit the actuation point - and as such it's better for the first timer. Silent keyboards may be better in work environments.

While the key types determine noise levels, it's also a matter of design - geekhack has a forum full of sound clips if you want a rough idea of how they sound - two keyboards of the same switch type may sound different based off physical design. You can also retrofit a keyboard with rubber o rings, or by other means to quieten it apparently, if it's too loud. I don't find my specific keyboard (a Razer BlackWidow Ultimate) to be that much louder than a cheap membrane keyboard (and there's differences there. I have an extremely horrible mushy silent perx keyboard, and a slightly louder, but decent Logitech - both membrane based), but it apparently seems to be built with good sound damping.

I also have a video here, comparing an utterly cheap mushy membrane keyboard (apparently a'perx Windows keyboard') a generic Logitech, and a standard BlackWidow Ultimate with Cherry MX keys - your Compaq should be similar to the Logitech.

Some folk also consider being able to press more than x keys at once (NKRO) essential for a good keyboard. It's less of a factor in typing IMO, but something that's mentioned a lot on keyboard sites.

My advice would be: If you are going to invest in mechanical keyboards, be prepared to invest more than once.

There are many more variables to a mechanical keyboard than just the keys. The height and small variations in the layout do make a difference over the long run. Some may look prettier on your desk than others. And because very often they change (improve mostly!) your typing habits, your preference for a keyboard may change as well.

In my case I bought a Cherry MX Red on a whim, without knowing what I was buying. It felt completely useless to me and I started reading as much as I could about mechanical keyboards just to understand what I had under my fingers (and why I had paid so much for a "crap" keyboard!). Based on many geekhack.org visits I decided to buy a Cherry MX Blue keyboard with blank keys. I loved that one to bits.

What I also bought was an extra set of o-rings which I placed on my Cherry Red, but left it at that. Then, I took it out of the closet after about a year on the Blue keys. And it felt like it gave me wings typing. None of the awkwardness I remembered on the first week of trying. It is softer and feels like it gives less strain and the sound agrees better with me.

The point is I might never have bought my current preference if I had made a conscious decision. And I would not have improved my typing as I have without the blank Blue. And now I relax in the fact that I may wake up another day and prefer the Blue again, and most definitely will just try out another keyboard somewhere in the future. The grass is always greener on the other side, just as the keyboard that you do not own can seem more comfortable.

It is absolutely impossible to "know" what a keyboard will be like for you based on reviews and youtube movies. So try to make the best decision you can based on what you read. Use it for a couple of months and then read again (you will recognize more of the subtleties that people are talking and blogging about), and then put the next best model on your wanted list.

In a universe that contains the IBM Model M (see Unicomp for modern versions of the same keyboard) with the buckling spring technology, all of these other switch technologies are simply pointless redundancy. Just get a Model M.