Why would TaskScheduler start tasks at the wrong time?

But from time to time the task is launched at a completely arbitrary time, such as 12:50 or 18:30. Sometimes I see the task's window pop up in front of me while I work. It's very IO-intensive so there is a reason why I run it at night. 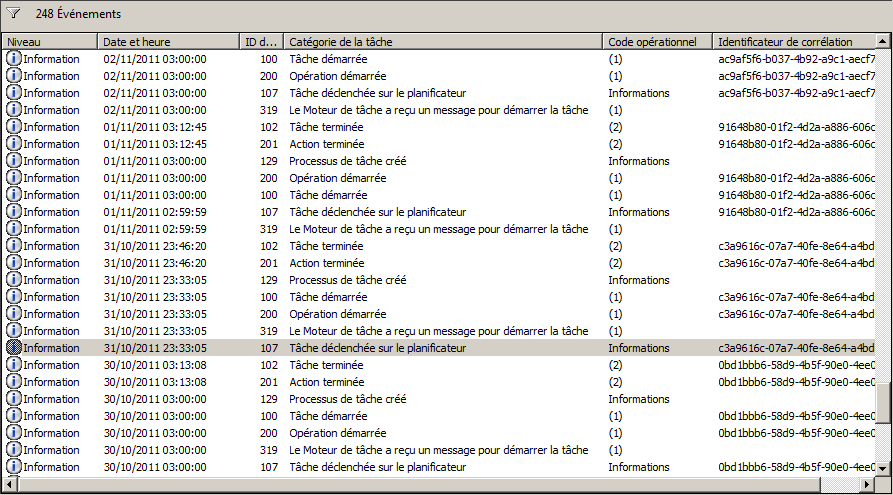 The file c:\Windows\Tasks\SCHEDLGU.TXT indicates that Task Scheduler was up and running at that time (again, dates in French locale, sorry):

I see absolutely nothing relevant in the TaskScheduler logs that may indicate why it was launched such an odd time. The machine runs 24/7 and is never rebooted except when Windows Update asks for it. It runs an extremely limited set of third-party software, my work environment consists of little more than Visual Studio and MSYS. It also runs Linux in a virtual machine that performs regular tasks (this is not really relevant but it shows that the machine never goes to sleep either).

This person has exactly the same problem. The answer from Microsoft (destroying and recreating the task, or using another user account) wasn't very helpful to someone who would like to understand the problem.

How would I go about investigating what is happening?

For further investigation you could get some sysinternals tools like Process Monitor and wait for the arbitrary triggering of the task to be logged. There's also a blog post in msdn that does some analysis on a task scheduler bug that stuxnet exploited.

Not the answer you're looking for? Browse other questions tagged windows-vista task-scheduler or ask your own question.