Prevent Windows System %PATH% from being prepended to user %PATH?

I know how to set system or user specific environment variables: 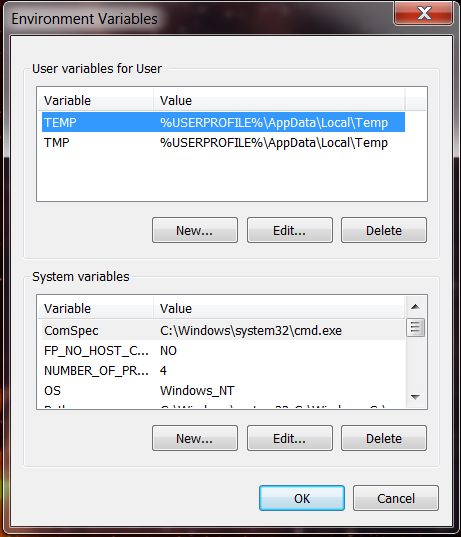 Now, the problem is that the PATH variable is treated such that the value you enter for the user PATH will be automatically appended to the system PATH and that will be the effective PATH variable.

That is, say I have

and (USER) PATH=C:\Program Files\Bar\bin (note that there is not %PATH% in this value)

then the resulting environment variable for this user will be:

However, I would rather like that for a very specific OS user account the PATH environment variable should have the bar\bindirectory at the beginning of the PATH instead of at the end.

Is there a proper way to tell windows to completely override the PATH variable of a user with the value for that user instead of appending it to the system PATHvariable?

Note: Obviously, from a batch file, all this doesn't matter as you can set and tweak the env.vars as you like.

If you only need this to work for command prompt sessions, create a profile/init batch file and configure it in the registry, per https://stackoverflow.com/questions/17404165/how-to-run-a-command-on-command-prompt-startup-in-windows. E.g.,

Then simply make modifications to the PATH in that batch file. E.g.,

I had the same problem and this worked for me:

You can get "user path variable" through:

The output (on my machine) is:

But then you have to parse this and use the relevant part.

I read the solution here here and tested on my machine.

I don't know how to ignore system variable, but I know that if you use session variables (via SET command), they take precedence over other variables. So you can use SET PATH=C:\Program Files\Bar\bin instruction and your desired path will be the first part of the variable.

Here is a valid reference, and I report here a simple period from that page: