On Windows 7, is there any way to make the scrollwheel's focus follow the mouse?

On Mac OS X I can mouse over something (without clicking on it or giving it complete focus) and use the scroll wheel to scroll it. On Windows (7 at least) which I'm forced to use in my new job, it does not work this way. Is there any way to change this behavior?

I notice that Firefox does this within the app: if any Firefox windows have focus then you can scroll any other Firefox window that doesn't. (So at least the Firefox people think this is a useful feature! And so anyone not familiar with how it works on OS X can see what I'm talking about.)

I remember TweakUI (which does not seem to be available for Windows 7) having a setting for "Focus follows mouse", but I don't recall if it allowed setting that only for the scroll wheel. I don't want the full X-Windows style focus-follows-mouse setting, just the ability to scroll whatever I mouse over.

UPDATE: According to @Mikey's comment, this is now built into Windows 10.

UPDATE: it has been suggested that my question is a duplicate of this question. That question seems to be concerned specifically with multiple controls on a single window, where keyboard focus is on the wrong control, but not on the wrong window. I'm asking about a situation with multiple windows. Any given solution has the potential to handle both use cases, but it is not a foregone conclusion that it would. It would be possible for any piece of software to handle one use case and not the other. They are similar, but they are not the same question.

This thing rocks... it is very intuitive to tech-people, don't know about to a normal person ) but if you figure it out, it is really powerful.

and yes it solves this scroll/hover problem too:

but it is so much more

For instance some of the things I use it for:

To get my Windows installation to scroll like Linux does (whatever the mouse is over is scrolled without necessarily having to have focus), I use a very small freeware app called AlwaysMouseWheel. Couldn't live without it on Windows.

My favored solution is to use Wizmouse.

There are a few caveats. Namely, WPF and Silverlight application with subpanes won't play nice. For WPF application examples that would be Visual Studios and Expressions Studios. Some areas of Powerpoint also get whacked, but otherwise it performs as expected.

If you've got Windows 7, it's in the accessibility settings: http://www.howtogeek.com/howto/windows-vista/switch-windows-by-hovering-the-mouse-over-a-window-in-windows-vista/

Some mouse drivers all this. It's a modification of "set focus".

Basically, in Windows the developers assumed you may not necessarily want to control what your mouse is over, and so they told the system to wait for you to click on a window before focus was removed from the previous window and assigned to the one you selected.

If the system is set to "set focus" to whichever program your mouse pointer is over, if you're merely trying to get your mouse out of the way and you move it over a different window, whatever you are doing will start occurring in whatever window your mouse is over. You cannot separate "scroll focus" from "full focus".

As long as you're aware of this and know how it may affect how you use your computer, if your mouse is capable of this (it's dependent on your mouse and drivers) you should find an option in your Mouse settings in the Control Panel.

taekwindow is a free (BSD license) sofware which solves this problem.

What exactly does it do?

In full detail, Taekwindow allows you to do the following:

All these features can be configured to your liking.

AltDrag, which is a tool to enable Linux-line moving and resizing of windows by clicking anywhere while holding the ALT key, also has this feature. In the configuration. under General, select "Scroll inactive windows".

You can do it in Windows 7 by going to start then search for "Change how your mouse works".

Select the checkbox for Activate a window by hovering mouse over it. 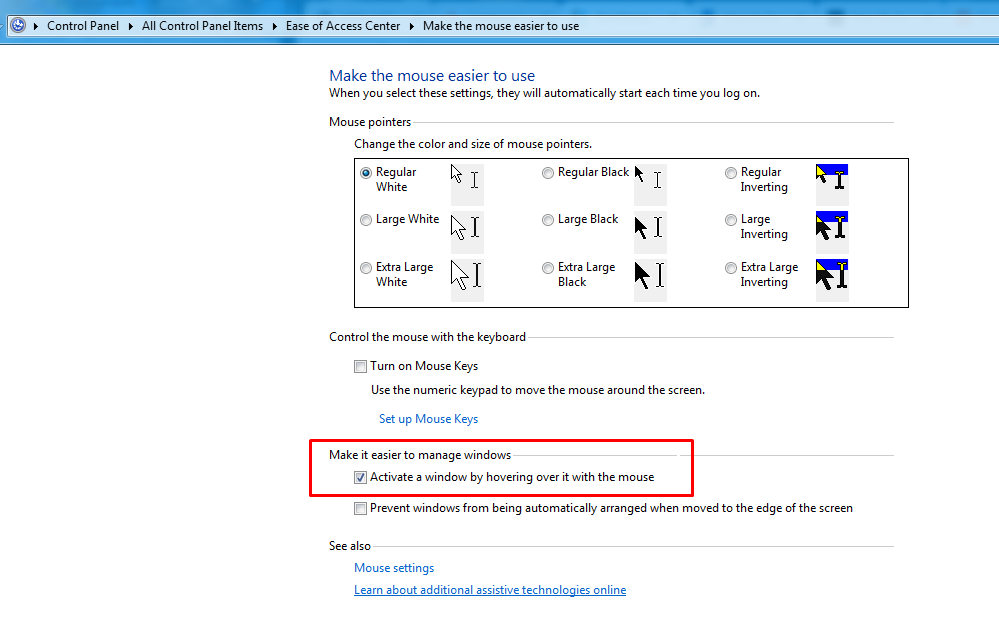 Not the answer you're looking for? Browse other questions tagged windows mouse focus scroll-wheel or ask your own question.

22
How to make mouse wheel to scroll control under mouse cursor?
6
Windows scroll without focus
3
Is the mouse wheel behaviour of Mac OS X or Linux possible in Windows?
2
Controlling browser while another window is being used
0
Open inactive window by scrolling up on taskbar icon

31
Focus Follows Mouse or Sloppy Focus on Mac OS X
4
Mouse wheel not working in firefox but only on one display
20
How to make mouse in Windows 7 act the same as Windows XP
5
How can I disable the mouse scroll wheel in Windows Vista
0
How to make mouse wheel scroll setting stick (Windows XP)
305
Inverting direction of mouse scroll wheel
76
How do you enable focus follows mouse in Windows 10
4
How to configure Windows 10 for "keyboard focus follows mouse" without clicking into the window and without raising the window?