How do I convert WTV (and DVR-MS) files into a smaller standard format?

The external hard drive on my HTPC is almost full and so I'm going to need to convert a large number of the films recorded from the television (in WTV format) into something smaller. At present, a 2 hour film is about 3-4GB.

I've tried converting the WTV file to DVR-MS (using the built in wtvconverter.exe) and then running it through handbrakecli with the following command line:

In Handbrake, this would be by setting the output to MP4, the encoder to x264 and the quality to 20.

The problem is that the resulting MP4 is between 1.5 and 2GB which, whilst smaller than the original file, still seems insane for a 2 hour long SD film recorded off (a PAL) television! I would expect something like that to be 700-800MB, if not less.

Setting the quality to 19 degrades the picture to the point it's unwatchable.

Can anyone recommend settings for Handbrake (or handbrakecli) which will convert a DVR-MS file into a much smaller size?

(I'm not particularly precious about the codec or the container, but would prefer something reasonably standard to ensure it can be watched on a high number of computers and mobile devices)

It's probably not clear, but if you only know what the settings are to convert a file using the graphical version of Handbrake, then that is a perfectly good answer!

Please note: When this answer was written (July 2012), ffmpeg couldn't convert WTV files without loss of audio. However testing on ffmpeg 4.0.0 has shown that it now works fine and, as a result, there is no need to use wtvconverter.exe to pre-convert the WTV file to DVR-MS. As such:

should convert your television recording.

After some research it turns out that:

You need to perform a couple of steps, firstly converting from WTV to DVR-MS:

Then deleting the temporary DVR-MS file:

Once converted, VLC will give the following details about "Recorded TV Show.mp4": 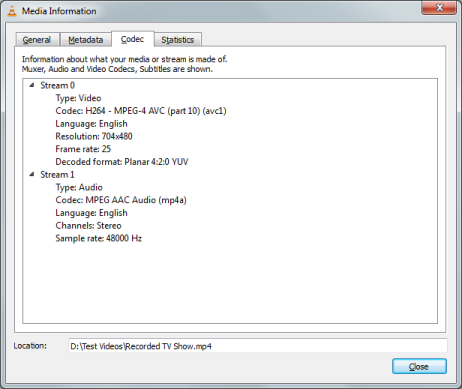 The file I converted is now 530MB (down from 1.59GB) for 1 hour and 50 minutes of SD content. This means it is approximately 1/3rd of the size of the original WTV file.

I was able to get ffmpeg to do the trick, but took some time to find switches that worked. Not sure these are optimum, and the conversion takes a lot longer, BUT it is clean, plays everywhere I have tried, and the audio is correct and in sync.

Based on @suken's answer, I was able to do a batch conversion. With the version of ffmpeg I used at that time, it worked directly from .wtv to .mp4.

The command tries to transfer the metadata over (e.g. show title and description) but it didn't seem to pick up in the destination file. You could try WTV-MetaRenamer first instead.

Not the answer you're looking for? Browse other questions tagged windows-media-center video-conversion handbrake or ask your own question.

3
WTV and DVR-MS television recordings, should I de-interlace or not?
0
Transferring .wtv files from Windows 8 Pro Media Center to OS X

1
Convert mkv/h264 video so it can be played on a "mid-range" Sony Ericsson phone. (using Ubuntu)
2
how can I convert video files to nook color format on Ubuntu 11.04
3
Why Handbrake compressing a video from a DVD can become 300MB, 1GB, or 2GB when the original should be only 600MB?
0
How do I remux AVC/AAC MKV into H264/AAC WTV?
3
WTV and DVR-MS television recordings, should I de-interlace or not?
4
How can I backup a movie DVD with a good quality, and keep the menu structure?
0
convert video into low resolution RGB32 format
3
How to split video files upon detected change in resolution? (ie. recorded streams containing multiple widths)
3
Why do MPG files take up so much space? Is it an outdated format?