Is there a way to let embedded videos (primarily Flash, but I'd prefer something that will also work with HTML5 video) automatically background load, but not start playing until explicitly started?

The typical use case where I want this ability is when opening a number of what I expected to be text pages in separate tabs using middle-clicks only to have something start yapping at me; at which point I need to click through all the new tabs to find and stop the offender.

I'd prefer not to completely block video download to avoid the startup delay if I decide to watch the video when I view the page its embedded in.

For embeded videos you can set media.autoplay.enabled to false in about:config.

For flash-players you can either disable automatic flash loading/start with some addon or use custom addons/greasemonkey scripts to disable each specific player's autoplay. For example: http://userscripts.org/scripts/show/13333

With the release of Firefox 63, the media.autoplay.enabled option no longer affects automatic video:

The preference media.autoplay.enabled is not listed anymore and it seems to have been removed as of Firefox 63. If you set it and right-click on it to reset it, you will notice that it is removed automatically on restart; that's a clear indicator that the preference is no longer supported.

This option has been replaced by several potential configurations, most notably media.autoplay.default:

Following the release of Firefox 66, the same option that was previously available in the about:config interface is now built into the default Options page: 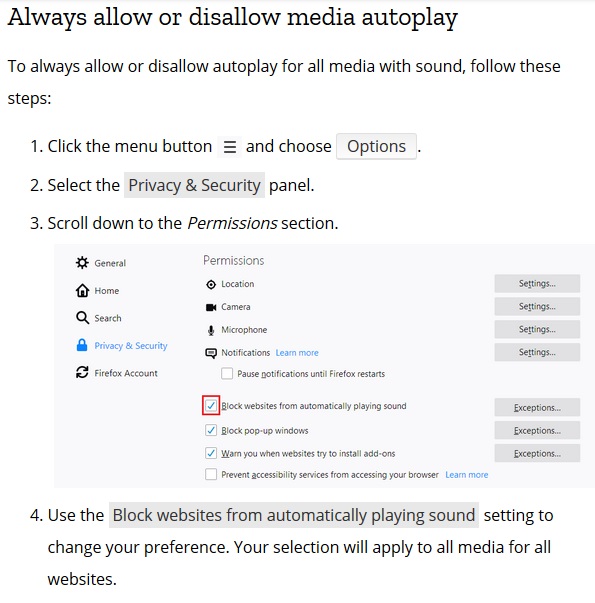 Checking that box will automatically set media.autoplay.default to 1 within the about:config interface. However, in order to completely stop media autoplay you will want to adjust the following settings, also:

You can use the Flashblock add-on to disable flash until you click it.

From the plugin page:

Flashblock is an extension for the Mozilla, Firefox, and Netscape browsers that takes a pessimistic approach to dealing with Macromedia Flash content on a webpage and blocks ALL Flash content from loading. It then leaves placeholders on the webpage that allow you to click to download and then view the Flash content.

Not the answer you're looking for? Browse other questions tagged firefox firefox-extensions or ask your own question.

1
Video autoplay still occurring even though all autoplay settings are off (Firefox Normandy)
7
Disable Video Buffering in Firefox
3
Disable autoplay in Firefox 66
1
How to prevent all audio and video media from starting in Firefox?

1
Firefox needs a plug-in to play online video
10
How to stop Firefox from updating?
0
Is there a Firefox Add-on for automatic redirection based on XPath?
4
How To Stop Firefox Tabs From Auto-Refreshing on Tab Switch
0
Firefox won't play Youtube videos anymore
1
Any modified Firefox plugin is auto-deleted upon starting Firefox - How do I stop that?
3
How to stop onload play html5 video on websites?
23
How to prevent automatic update to Firefox 57.0 Quantum?