Is USB Data + wire supposed to have grounding?

Whenever I am connecting a LED to USB's red cable (5V) and Data + (white cable), the led turns ON, although the light isn't that bright as if i would connect it to GND (black cable) instead of Data +. Is this normal? 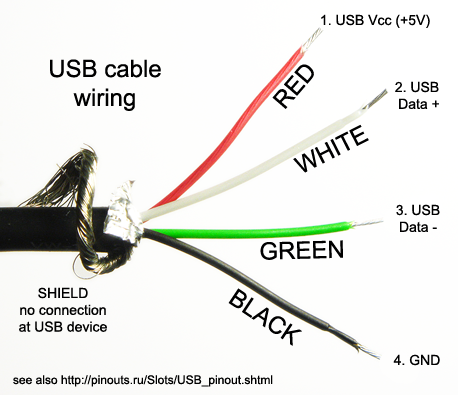 Data lines are not expected to source or sink much current. They are designed for signalling not for powering light bulbs.

(from some random web page)

A typical small indicator LED is probably designed to draw 20-30 mA. A LED from a torch might be designed to draw 1A or more. Your USB chips certainly won't source or sink high currents on D+.

What you've observed is very normal.

What you're seeing is, in idle state, the USB data lines (D+ and D-) are connected to "ground" (or sometimes 3.3 volts) through a small resistor. So you're effectively connecting your LED to power in series with a resistor. Resistors, to simplify, restrict the current flow and will make the LED appear dimmer - exactly what you've observed.

Having said that, I would recommend you do not try to run current through the USB data lines. The drivers in the computer that you're connected to can only handle so much and it would be possible to accidentally damage the USB port on your computer.

Now, if you're connected to a wall brick, that might be different. Rarely, they use the data lines for extra current. But that I believe is against the USB specification. More common would be a resistor similar to the one in your computer. Also common is the data lines are left "floating", but tied to each other.

Also note that in many cables, they use bigger wires (have a higher current capacity) for the power lines than for the data wires.

PS, as others have noted, your labels on the white and green wires are swapped with respect to the official standard.

Not the answer you're looking for? Browse other questions tagged usb pin or ask your own question.

5
Microsoft USB Wire Color Code
7
USB wire colors not matching standard colors: white, light-grey, blue, green; which is what?
11
Danger/Risk of Plugging USB Devices into Powered USB Ports
0
I need to connect two USB cables but upon peeling them i have come across wires of totally different colour schemes, how to connect them?
1
Turn off USB power when system not in use on motherboard
0
HDD connected via USB cable - Disk unknown not initialized
0
USB Power Cable Only