Possible Duplicate:
Difference between x86_64 and i386

Whenever I download any files, I notice that the end of filename is sometimes x86_64.iso & sometimes it is i386.iso

What's the difference between these two?

x86 refers to the general family of processors made by Intel, AMD, Cyrix, Siemens and etc. that use a common instruction set. Think of it as how we refer to certain human languages as being "latin based."

Within the x86 set of "languages" there are stair-stepped sub-languages. The most common three that you will run across in modern times are

For more information on the different CPU instruction sets, see the Wikipedia article x86 instruction listings and note how each chip introduced a new set of instructions that, generally speaking, improved upon and added to the previous set before it.

Once again, I speak in general terms when I say this: The newer the instruction set that the OS can "speak", the more advanced features within the chip that can be taken advantage of to the benefit of the OS.

i[n]86 refers to the highest set of instructions within the x86 family of processors that the program / OS will utilize. Specific generations of chips have specific subsets of instructions such as the 80386, 80486, 80686 etc. If an ISO is demarcated as being i386, it means that it doesn't use instruction sets for the CPU above the 80386 standard set. It will run on all x86 CPUs however. 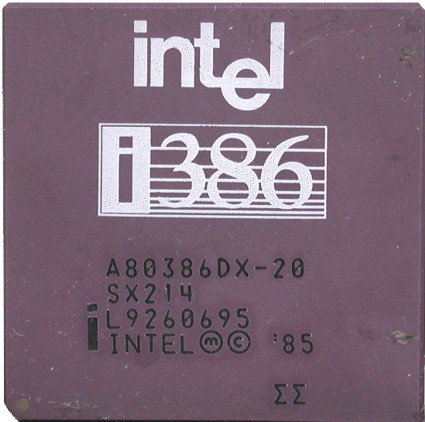 Generally, the older the instruction set that a OS needs, the broader the possible hardware that you can install it on. However, i686 is broad enough these days to where you'll likely never have any trouble installing it unless you're trolling through the dumpsters behind a dollar store.

2
Join with missing lines
1
Is my CPU 32-bit or 64-bit? Output from lshw, lscpu, getconf and /proc/cpuinfo
1
SFTP - Recursively fetch new files
3
Hidden Files in Linux
11
What is the exact difference between the parameters (pgpgin, pswpin) and (pswpout, pgpgout) in /proc/vmstat?
1
Share configuration files between two users
1
What's the difference between these two forms of SSH tunnel commands?
0
Why do .sha256 hash files include asterisk before and after filenames?