Whenever I click Alt + Arrow up/Arrow down my screen will do an unwanted flip. I'd like to disable this shortcut behaviour. I've already looked at Super User question How to stop my laptop's screen from rotating when I press Alt + Arrow?.

I have an Nvidia graphic card, 2100M, and Windows 7 on a Toshiba computer.

Neither of these answers helped me. What I did:

As indicated in Windows Forums and Microsoft Answers

For these using Intel Graphic, to disable global hotkeys: 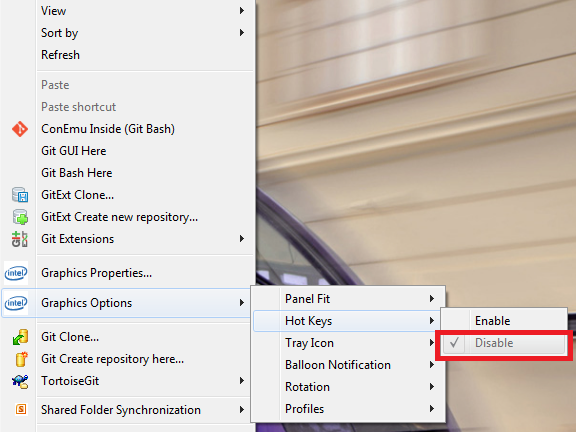 I had the exact same issue on an Acer notebook with an Intel graphics driver. Simply disabling the feature was not enough, since the keys are still captured and not passed to the system afterwards, even if the rotation did not happen.

That means I was still not able to use this key combination in any other software, because it won't receive the shortcut.

To solve this I opened the Intel graphics properties page, enabled shortcuts, changed all available shortcuts from Ctrl+Alt+(some key) to Ctrl+Shift+(some key), and finally deactivated it again. This way the Ctrl+Alt combination is captured only for the F8 key, which can't be changed, and all other shortcuts are captured by the software I wanted to use (like Eclipse or PHPStorm) - I rarely use the other combination, so this was a valid solution for me.

Have a look at the Control Panel for the Nvidia Desktop Software and launch it. It should bring up a configuration Menu (for screen resolution, etc.) and there should be a Menu Item to disable the Hotkeys. IIRC it is the last Item.

In some obscure place off the internet I found a solution.

If your processor is from Intel, one of these possibilities should work in your case: 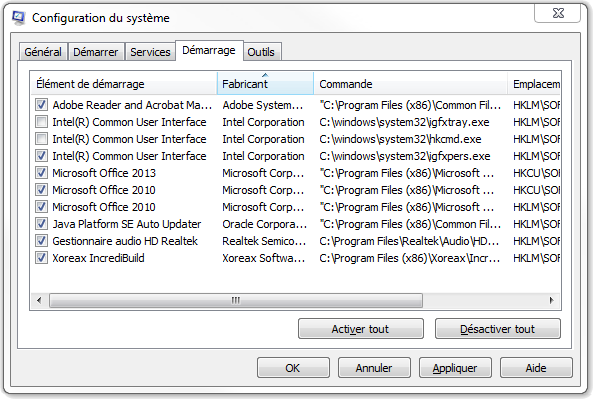 It is possible to disable hot key catching withing Intel applet (by Ctrl+Alt+F12 or from Graphic options on Desktop right click).

But I recommend to disable Intel applets!

Ctrl+Shift+Esc to start Task Manager and disable everything from Intel published in Startup tab (hkcmd module is responsible for catching keys, also igfxTray module is useless).

Not the answer you're looking for? Browse other questions tagged windows-7 hotkeys nvidia-graphics-card or ask your own question.

22
How can I re-enable backspace navigation in Chrome?
9
How to stop my laptop's screen from rotating when I press Alt + Arrow?