How do I configure my Linksys routers to resist the WPS brute-force vulnerability?

In short, this describes how modern wireless routers can have their PSKs discovered within just a matter of hours - even if they're using WPA2 with a strong PSK.

The exploit is done by abusing a design flaw in the Wi-Fi Protected Setup (WPS) feature that is common to most routers. The WPS PIN can be (relatively) easily brute-forced, and this can lead to revelation of the WPA2 PSK. This remains effective even if the victim changes their PSK. The only known work-around is to disable the WPS feature.

I personally don't use the WPS feature at all. I use randomly-generated 63-character PSKs which I either manually enter or cut-and-paste to client devices. The fact that there is a side-channel attack which can easily circumvent this protection bothers me a bit. So, I'd like to disable the WPS feature as suggested.

When I go to the Wireless section of my routers' configuration sites, (both appear the same, in regards to this post) I see this:

Below that is my basic wireless radio configuration options (Network Mode, Network Name (SSID), Channel Width, Wide Channel, Standard Channel, SSID Broadcast) for each of the 2.4 and 5 GHz bands. Nothing here, aside from the Wi-Fi Protected Setup radio button, addresses anything related to security.

If I go to the Wireless Security section, I only see the options for configuring my passphrase on each band. No mention of Wi-Fi Protected Setup in there.

However, if I select the Wi-Fi Protected Setup radio button under Basic Wireless Settings, I see this: 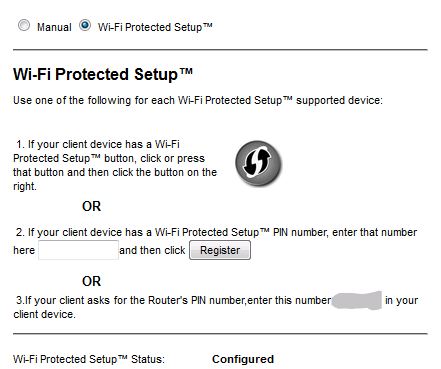 Obviously, I've obscured the PIN here. Also, below this section are configuration details of the WPA2 PSKs for each radio band. The key element I'm concerned with though, is where it says "Wi-Fi Protected Setup Status: Configured". Does this mean that my router still has the WPS service active, despite the fact that I'm not using it? If so, how can I disable it on this router? Is there an option I'm missing?

NOTE: I've checked and found a firmware update for the WRT400N, but the E3000 is already running the most current version. Also, I don't see anything in the Release Notes for the WRT400N's update which seems to be addressing my issue.

While not an ideal solution, installing the DD-WRT or Tomato custom firmwares will resolve this, as they do not implement WPS

MAC address filtering offers some protection, but can easily be bypassed.

I have the E3000 router and have also been looking for a way to disable it, and as far as my research goes, it is currently not possible (with FW 1.0.04).

That "Manual" switch only affects the GUI, if you look at the beacon (with some WiFi Analyzer) you will notice that WPS is still enabled.

UPDATE: Take a look at here. The guy there basically states (about E3000) that "Vulnerable: YES - however, the WDS falls over quickly so it is not very practical to attack a router.", so thanks to it's vulnerability to denial of service, it withstands the WPS attack...

Information about other routers is also listed in his public google spreadsheet.

Cisco announced dates for firmware releases which allow Disabling WPS. Both E3000 and WRT400N remain To Be Determined, but some models list "early March".

They suggest disabling all wifi in the meantime. Thanks, Cisco!

Not the answer you're looking for? Browse other questions tagged wireless-networking security or ask your own question.

1
How can I connect my XP laptop to my wireless network if my wireless network doesn't show up in the list?
1
Wifi network SSID not visible
2
Reconfiguring a WiFi Access Point's wireless settings through WPS?
2
TP-Link TL-WA701N not working good as wireless extender
0
Wifi network stopped being visible (and usable) (Linksys wag320n)
1
DD-WRT: How To Do Multiple APs on Wired Network?
0
Can a device that has wifi that does not support WPA connect to an access point configured for WPA via WPS-PBC?
0
How can I connect two routers using WDS?