I am trying to set up my very first virtual machine via VirtualBox (4.1.8). I created the machine and selected Linux → Ubuntu inside VBox's installation wizard. I then went to run the machine for the first time, and it asked me for a drive from which to boot Ubuntu from.

I panicked, realizing I had got ahead of myself and did not have an Ubuntu ISO downloaded ahead of time. So I canceled out of the "first run" only to get a black terminal screen saying:

I powered off the VM. Just to see what it did when I tried running it a 2nd time (manually invoking a startup from VBox Manager), I re-started the VM and it did the same thing. In VBox Manager it shows the boot order as being: Floppy, CD/DVD-DOM, and then HD.

I am now confused as to how to point this VM to boot from an Ubuntu ISO somewhere on my host (Windows 7) machine. Hopefully, once Ubuntu is installed on the VM, I can just start it from VBox Manager without having to worry about where the ISO is, yes?

Can anyone point me in the right direction here?

Go into the settings of your VM. Under Storage, you'll see your Virtual HDD and a CD. Click on the CD and on the top right, select the ISO file. Restart your VM and this should do the trick. 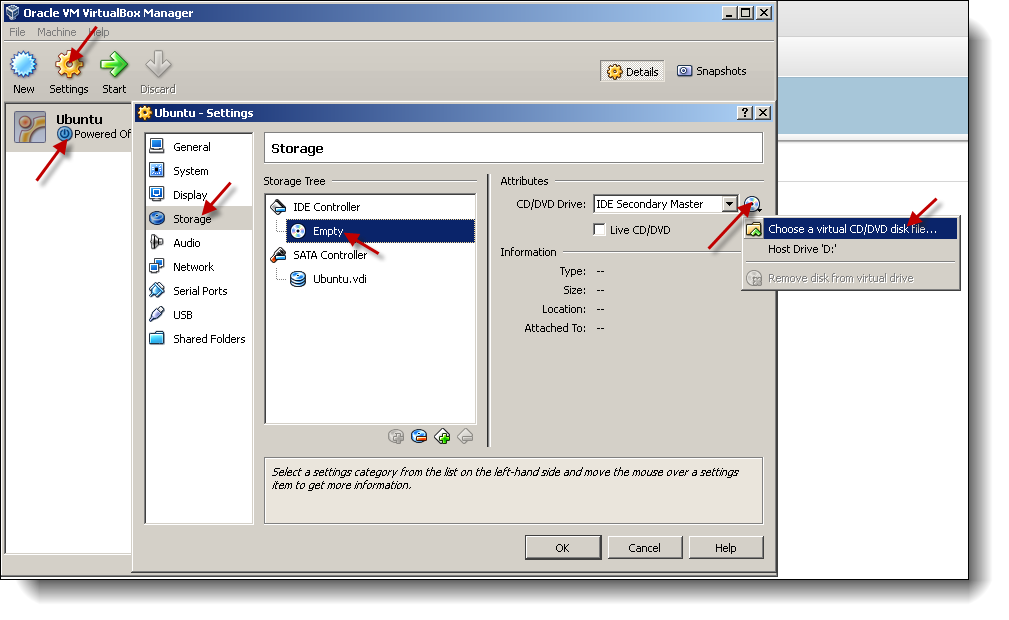 Not the answer you're looking for? Browse other questions tagged ubuntu virtualbox virtual-machine or ask your own question.

0
Error when starting a new Linux VM in VirtualBox