How to convert a CD into MP3 files with just Windows XP & Windows Media Player 9?

How can I convert a CD into MP3 files with Windows XP and Windows Media Player 9?

At first sight it seems it can only save WMA files.

No matter what you do, you'll need to install something in order to get this to work for you.

My suggestion is to install a program like CDex which runs on Windows XP, is straight forward to use and powerful if you need more encoding options later.

As of version 8, Windows Media Player contains a MP3 CBR encoder (l3codec?.acm); however, this must be enabled manually in earlier versions by editing the registry.

You can do this through regedit.exe; the key name is HKLM\SOFTWARE\Microsoft\MediaPlayer\Settings\MP3Encoding in which you have to add four REG_DWORD values, each representing a position in the "Quality" slider: LowRate, MediumRate, MediumHighRate and HighRate. The data has to be in bps; for example, 0x1f400 (hex) or 128000 (dec) for 128 kbps.

This appears to be enabled by default on my system (Windows XP with WMP 11).

However, some sources claim that the l3codeca.acm codec, used by earlier versions (up to v10), is rather limited in features – for example, 22050 Hz sample rate. (I could not verify this myself.) WMP 11 includes l3codecp.acm, which does not appear to have such limitations. Since you are using Windows XP, you can (and probably should) upgrade to WMP 11.

Go to the menu Tools - > Options. Then select the "Rip Music" tab. Under "Rip Settings" select MP3 from the "Format" drop down menu. 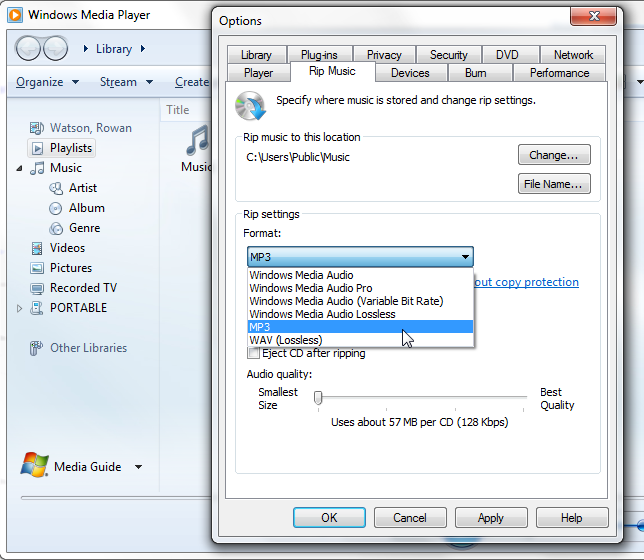 Not the answer you're looking for? Browse other questions tagged windows windows-xp mp3 windows-media-player compact-disc or ask your own question.