However, any channel in between them does. 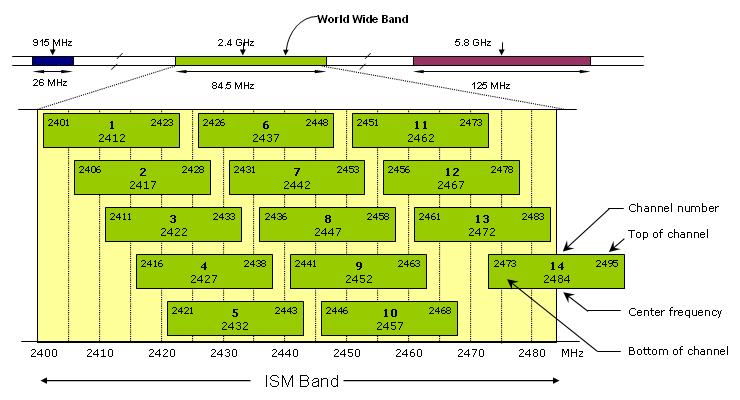 Why would one choose to use channel's other than 1, 6 or 11 if that is the case.

Cisco has a deployment page that illustrates this. The problem comes from having the center frequencies on 5kHz separation, but with 22MHz wide passbands. Normally, in a radio frequency assignment plan, you have for example a 12.5kHz passband and channels on center frequencies every 12.5kHz. Adjacent channel interference usually means you assign out every other channel in a local area, unless the spectrum starts getting crowded.

Because of the insane amount of overlap on 802.11, in a close area, say a warehouse, you can only use 1, 6, 11 without adjacent channel interference. Down the street where the signal falls off, someone else could use channels 2 & 7 simultaneously, a little further on, 3 and 8, and so forth.

As to the reason for the overlap, I'm guessing that they had too much faith in their spread-spectrum modulation scheme they were using when the specs were created.

So, go ahead and use those other channels!

First of all, it is important to note that the cited Cisco paper only applies to a single organisation controlling all of the IEEE 802.11 signals inside one building. It does not apply to the myriad of WiFi signals you may encounter when scanning your neighbourhood. "WiFi in the wild" so to speak, is a different story.

A lot of people mistakenly consider IEEE 802.11 signals like solid cars on a multi-lane highway. They frown upon people driving over the lines, partially occupying more than one lane.

However, Wifi signals are rather like coloured plumes of smoke. Along the open lanes, the colour plumes are allowed to intermingle. As long as I can still tell the colour of my plume of smoke at the end of the road, all is fine. The partial overlap of differently coloured plumes is then like a grey mist of noise to my signal. This technique, employed by 802.11b, is called spread spectrum, or rather direct-sequence spread spectrum (DSSS) to be precise. The technical term for "plume of smoke" in DSSS is pseudo noise (PN) code. 802.11g circumvents in-channel noise through orthogonal frequency-division multiplexing (OFDM) of a multitude of narrow (hence slow but more reliable) carriers.

For this very same reason, in moderately congested neighbourhoods, one stands a very good chance to benefit from not sticking to the proposed 1-6-11 channel scheme. Not sticking to 1-6-11 will prevent your devices from being silenced by the IEEE 802.11 RTS/CTS/ACK (Request to Send / Clear to Send / Acknowledge) of alien devices on the same channel. So not sticking to the 1-6-11 channel scheme may effectively increase your data throughput in many cases. You will need to test it on a busy time of the day to know for sure.

Also consider the band edges which may offer protection of overlap at one side of the spread spectrum channel. Over here in Belgium, I am lucky that I may use channel 13 centred at 2.472 GHz. In some geographies you may even use channel 14 centred at 2.484 GHz which has no overlap with any of the 1-6-11 channels at all! Most equipment though comes preconfigured for use in the US where the available 2.4GHz channels are limited up to channel 12.

If you live outside the US, tell (all of) your equipment so. This will open up more channels. On GNU/Linux machines this easily done with the following command, where BE is the ISO 3166-1 alpha-2 two-letter country code for Belgium.

The following command will give you a list of available channels (here shown for a different geography):

More importantly, do not forget to also properly configure your base station (look up the manual).

It is because other people use those channels, and as such, having a overlapping but less crowded channel is better than having the same channel as someone else. It would have some contention, but not as much

The nonsense that only channels 1,6 and 11 should be used because they do not overlap, is spread on so many "expert" websites (such as http://www.wifimetrix.com/channels-1-6-11-only/ ) that it must be true. Even the Charter/Spectrum installers here in Texas disable the auto-channel feature on their own cable modems and gateways because they are told to do so. The IEEE 802.11 standards (I am an IEEE member, by the way) are designed for overlapping channels, with the actual rule being "use the least congested channel."

Here are actual WiFi spectrums in my house, and the over 100% speed improvement on Channel 9 compared to Channel 6. Notice all my Charter/Spectrum neighbors piled on top of each other on channels 1, 6 and 11 by policy. Those proclaiming the "selfishness" of using channel 9, for example, because it causes interference to neighbors "following the rules" on channels 6 AND 11 don't have a clue that the channel bandpass curves show that channel 9's power is down 10dB (to 1/10) on channels 8 and 10, and down over 30db (to 1/1000) on 6 and 11. How about the selfishness of using channels 1, 6 or 11 and PUTTING 100% OF YOUR POWER right on top of the same channel your neighbors are using?WiFi Spectrum at my home channel 6 vs channel 9

You really shouldn't use the "other" Wi-Fi channels, but here are some reasons for why they may be used, as well as some general information about 802.11 channels and interference.

When I talk about reliability, I'm referring to a wireless link that delivers a constant minimum speed, which is very important for things like VoIP and video conferencing. Speed refers to the average throughput which is important for downloads.

In the US, you can use channels 1 to 11 (or 1 to 9), giving you 3 non overlapping 22MHz (or 20MHz) channels, and in Europe channels 1 to 13 can be used, providing 4 non overlapping 20MHz channels, or two non interfering 40MHz N mode channels. Each channel is 5MHz wide and Wi-Fi needs 20MHz of separation. 11b DSSS/CCK Wi-Fi actually uses 22MHz, leading to the more ideal 25MHz recommended spacing of channels 1, 6, and 11. That's mostly obsolete, but even g networks fall back to DSSS at their lowest bitrates, so 25MHz still can help a little.

The 5GHz band has 9 non overlapping 20MHz channels (notice how they skip by 4), with the some of the newer equipment adding 4 or more channels.

Reason 1: All of your Wi-Fi client devices remain very close to your access point at all times, and you don't care about causing interference to others or having a reliable connection farther away. For example, you have neighbors with networks on channels 1, 6, and 11, but when doing a speed test while being very close to your access point, you found that using an in between channel such as channel 3 was the fastest. The reason is your wireless devices avoid generating interference by not transmitting when they can detect other Wi-Fi traffic being transmitted on the same channel. By using channel 3, this feature is effectively disabled and your devices can no longer see traffic from your neighbors' networks. Your devices then operate at full speed because no interference is detected. As long as your devices remain very close to your access point, the interference from your neighbors on channels 1 and 6 won't be strong enough to cause interference to you. But now the users on channels 1, 3 or 6 will have horrible reliability if they move farther away if two of the overlapping channels are in use at the same time.

Reason 2: You're using 11b DSSS modes that are more tolerant to overlapping. Because these are spread spectrum, a channel that overlaps somewhat just degrades the quality of the link resulting in a lower possible bit rate or range. You may be able to squeeze 4 channels in to the channel 1 to 11 range and obtain higher performance. 11b is long obsolete and there is really no reason to do this when you can have 3 non interfering 54mbps OFDM channels (or 4 in Europe). Have you ever seen your Wi-Fi card transmit at 2, 5.5, or 11mbps DSSS (11b) modes when 6mbps OFDM (11g) should provide better range than 2mbps DSSS? This may be because DSSS is more tolerant to a partially overlapping channel than OFDM is.

Reason 3: You're still using some very old wireless equipment that predates the 11b standard, or you're using a special narrow band 5MHz wireless channel, or you're trying to avoid interference from a narrow band device like a baby monitor or microwave oven. In this case you might use channels 1, 5, and 9 leaving the top end of the band (above channel 11) open for the other equipment.

Wi-Fi is meant to generate minimal interference when configured correctly. Each wireless frame contains a header which is broadcast at the slowest speed. It contains the preamble and the packet length. The high speed data follows after it. This is done so that all nodes in the area can receive the frame header and not transmit until that frame finishes broadcasting. When nodes are too far part to see each other's headers, the network switches in to RTS/CTS mode so that all nodes receive a signal from the access point to stay quiet while an out of range node is transmitting. This also applies to mixed 11b and 11g devices since 11b devices can't receive 11g frame headers. When an access point is set on an overlapping in between channel, all this falls apart.

A lot has changed in the 7 years since this question was posted. Cheap double channel width 11n devices have become common place. More recently, 11ac devices which can combine up to 8 of the 9 or more available channels to make a super wide high speed channel in the 5GHz band are becoming common place.

Unlike the older 108mbps Atheros hardware that uses the second channel only as needed and when it detects that it isn't busy, the new 11n standard doesn't have such good interference reduction. It operates at double wide channel mode all the time when 40MHz channel mode is enabled. It's so bad that most people completely disable the 40MHz N mode in any urban environment.

Some of the responses said to move to 5GHz. With 11ac becoming common place, it may no longer be so easy to even find a single (20MHz) channel to use if 4 or 8 channel wide 11ac is in use nearby. 11ac is supposed to be better at not generating interference on the bonded channels when they're already in use, but I don't know how well that works. Many of the 5GHz clients connecting to the new 11ac access points are actually b/g/a/n clients connecting in n mode, and they generate the same interference that n does on 2.4GHz.

If you want to increase your speed without generating and receiving more interference, it's best to use MiMO modes to get 2 or even 3 data streams out of a single 20MHz channel. Unfortunately the ultra compact mobile devices usually don't support multiple MiMO streams.

Improperly configured access points, cheap channel bonding access points without MiMO, and round the clock streaming have made Wi-Fi reliability far worse than it was 10 years ago. I hope this information helps.

Not the answer you're looking for? Browse other questions tagged wireless-networking 802.11 or ask your own question.