Tricky workaround to power supply a GPU fan: is it safe?

My nVidia GeForce 8800GT had a serious problem with its stock cooling fan: it started to make strange noises and I later discovered that it was hitting the heat sink, because of an abnormal rotation that was causing the blades to go up and down. I couldn't find any way to fix it.

I bought a replacement cooling set (fan and heat sink) which I managed to mount on the card with no hassle at all. But I suddenly discovered that the power supply plug of the fan had two pins whereas the connector on the card had four pins. The fan plugs on the motherboard, instead, have 3 pins! I felt discouraged and started complaining about myself... :(

Fortunately (or not?) I discovered that on the MB there was an unused male plug to install an IEEE 1394 connector. It had 9 pins, and two of them were coupled and marked +12V and GND respectively. I distorted the pins in order to force the fan female plug to make contact with these two pins.

I started the system, and the fan worked. The GPU temperature is fine.

I'm not here advertising my bravery, but merely asking: how much is my machine at risk? Is this tricky workaround dangerous, or not?

However, do mind that most cooling sets have fans which are regulated based on chip set/core temperature. The way your fan is now connected will keep the fan spinning at all times.

I would try to look for a proper cooling fan. This workaround should hold but of course it's not a preferred solution.

With your setup, the graphics card thinks the fan isn't spinning, since it's not getting a signal from it. The graphics card might reduce its performance as a result. (Or it might not, since it knows it's not overheating.)

Plugging a 4 pin fan plug to a 3 pin motherboard is perfectly fine.

Fan has a 4-pin power connector; desktop board has a 3-pin fan header: 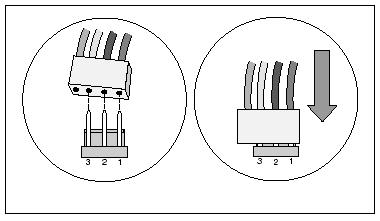 As you can see, the 4th pin is used for fan control, but if your motherboard supports fan control using PWM, then you should still be able to control it's speed the 3-pin way using with SpeedFan based on the GPU's temperature.

Edit: As for the 2 pins, we can safely guess it also lacks the tachometer - simply means your Power Supply does not have any use for the speed reading of the fan.

Not the answer you're looking for? Browse other questions tagged graphics-card fan or ask your own question.

1
Wires from fan on side panel - where do they connect?
3
Is the cooling fan on a 2004 graphics card really necessary?
1
EVGA Geforce GTX 760 ACX Installation issues
2
What kind of 3 pin fan connector is this, and where can I buy one?
1
My New PC fans are super loud
0
SuperMicro GPU temperature-based fan control
0
Speeding up a fan running in 'dumb' mode
0
Can too high of a wattage on a (cheap) power supply cause a GPU to burn?