How to disable Flash plugin on Firefox, but with a whitelist? I mean *really* disable it

Ok, this is a toughie. I'm a Firefox user, and I don't like Flash ads. They slow down my netbook, they slow down my Macbook, they sometimes play sound or obscure part of the page, all of which means as soon as I see a Flash ad I associate that advertiser with burning rage more than with good products.

That said, I don't see how the Web can exist without advertisement. I'm also not convinced that ABP's "acceptable advertising" functionality will actually encourage sites to change their advertising to serve static ads. For every technorati with an adblocker, there's someone who likes shooting animated, cartoon ducks in a sidebar ad. So rather than trying to politically force the advertisers to change their practices, I'd like to find a client-side way to opt out of just Flash ads—without opting out of static ads or even animated GIFs (even a nice, smooth animated GIF is better than jerky, resource-consuming Flash).

Turns out that if I disable Flash in about:addons, pretty much all advertisers actually detect the absence of Flash and serve me a static ad instead. This is fantastic: I can browse the Internet in peace and still support the sites I visit with ad views. It actually makes me more likely to read the ad and feel positively about it. Problem is, I haven't found a way to disable Flash by default and enable it for whitelisted sites (or at least, not on OS X and Arch Linux. Embarrassingly, IE actually has a built-in way to whitelist plugins).

There are plenty of addons and userscripts that, rather than disabling Flash outright, simply replace Flash content with nifty logos or "click to play" buttons. But that's not what I want, and to be honest, scattering the same logo everywhere there's flash content (i.e. everywhere) is kind of ugly. And a button on the toolbar to toggle Flash quickly isn't quite right either, because there's no whitelist. I'd like to be able to browse Wired with static ads, then open Youtube without having to click that button first (and then inevitably forget about it as soon as I browse somewhere else).

Anyone got a solution? Or ideas about userscript ways to make this happen? I can't be the only person who finds those little replacement icons even more jarring than the Flash ads themselves.

FlashHider does exactly this, it hides Flash from the sites where it's blocked.

Flashblock is what I use. Works quietly, allows whitelist.

NoScript, a Firefox addon; it lets you disable scripts, Flash and other plugins and has a whitelist.

Uninstall the Flash Player, and install Google Chrome (it includes the Flash Player plugin built-in). Browse normally with Firefox, and when you absolutely need Flash, switch to Chrome.

John Gruber explains this setup. You can even define a keyboard shortcut to open the current page in Chrome.

To make this process automated (and use Internet Explorer instead), you can use the Firefox add-on IE Tab 2. It can display a Firefox tab using Internet Explorer automatically, based on filters that you specify.

The closest I have come so far is to use the FlashDisable add-on which adds a simple toggle button to the Firefox UI that I manually use to turn the flash plugin on and off (at least it comes with an automatically reload function which is nice). So I cruise with Flash off until I come across a site that absolutely needs it, and I hit the toggle button. Then I need to remember to turn it back off when I'm done.

There are several benefits to be had if this enable/disable plugin action could be made automatic based on a whitelist that enables/disables the flash plugin based on webiste visited:

The in-built Click-To-Enable function in Firefox does NOT do what I am looking for, because it still reports to the website that Flash is enabled, but then waits on a local command to serve the Flash element. This still means I get served Flash on the website I wish would give me the HTML5-fallback instead.

Tools->Add-ons->Plugins: in there when I go to Shockwave Flash I get three options:

If you select the second option, Ask to activate, then flash will not play by default. When a website requires flash, you can click a link on the flash location called Activate Adobe Flash and a popup appears asking you to either allow just this time or allow it this time and remember for future visits. If you click on the icon on the top left corner you can block it again for this website. 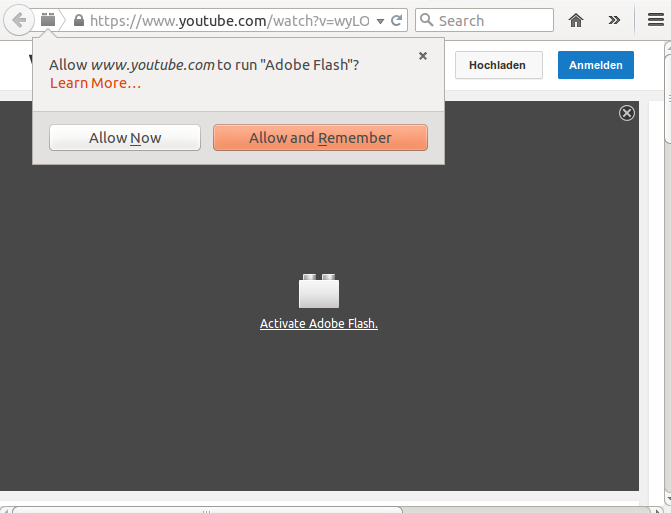 2
Firefox Flash plugin : compatibility mode
0
How do I install the Flash plugin for Firefox on Ubuntu offline?
1
How can I keep Firefox from clearing Flash Files downloaded from sites like ArmorGames.com?
2
flash plugin for firefox 9.0.1 Ubuntu 11.10
0
How to manage volume of flash player applications on websites with Firefox?
1
Flash disable it self automatically on Firefox
2
How can I disable the blocking of non-essential Flash content in Firefox 51?