There's many similar questions to this, and because the answers vary depending on the setup, I want to ask for my friend's specific setup.

The only thing he's missing is a power supply. Now to make this use up as little money as possible (he just wants this PC to be made for his gf, it won't be for gaming), I have a spare Coolermaster 600w from awhile back that I can provide to him.

He has no plans to overclock the spare build, and he's using a relatively lower end video card. Is it OK for him to use the PSU's ATX 12v 4-pin and just stick it in one half (I'm assuming the EPS 12v 8-pin is keyed correctly?) of the 8-pin connector?

Edit: Following up on Synetech's answer, would this ultimately solve my issue since it combines a P4 with a 4-pin molex to turn it into a full-blown 8-pin EPS 12v plug? http://www.newegg.com/Product/Product.aspx?Item=N82E16812200459

Page 16 of the manual to the motherboard says that the 8-pin connector is for supplying power to the CPU.

If you look at the pinout of the 8-pin socket and the 4-pin cable (figures 1 and 2 below respectively), you will notice that physically, it should be compatible. I found a page (figure 3) that indicates that it can be done, but strongly advises using a proper 8-pin cable. This makes sense because the connector is generally for providing the CPU with extra power (as opposed to any power), so while it may work, the system may suddenly shut down if CPU usage goes up to 100% (eg while doing a virus-scan, watching YouTube videos, etc.)

Another option I have found is some discussions (like this one) about using an adapter (figure 4) to connect the 4-pin cable to both halves of the 8-pin connector. In fact, there are plenty such adapters on eBay for as little as $1 (and free shipping). Newegg also has a couple. Of course the problem with this method is the same as the previous one in that there is no additional power being supplied; this method simply splits the power from one source across the two halves of the connector.

Like you said, a Molex-to-8pin adapter is a good option too. There are different ones available which either split a single cable across the two halves of the 8-pin connector (which is generally not going to be a problem since that is what happens when you plug the three or four connectors on one cable into multiple drives, etc. anyway). There are others (figure 5) that have two separate Molex connectors (one for each half of the 8-pin) which you can plug into Molex connectors from different cables from the PSU for extra peace of mind. These are fairly cheap too (~$2 with shipping). It also has similarly good reviews.

In fact, there are also 6-pin PCI-E to 8-pin ATX12V adapters as well, and probably others (though you indicated that the PSU does not have this).

The difference between the two methods gets to be somewhat complicated if you are not familiar with electronic engineering, but suffice it to say that method two is the better one in most circumstances. Using a PSU with an actual, dedicated 8-pin cable is the best solution of course, but if you look at the reviews at Newegg for the adapters, you will see that all of the reviews are positive, indicating that an adapter will likely be a good way to solve this problem for next to nothing. 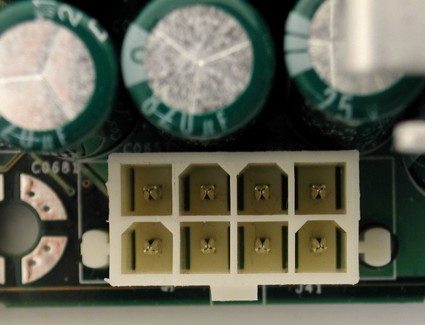 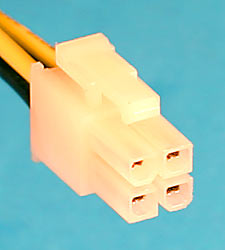 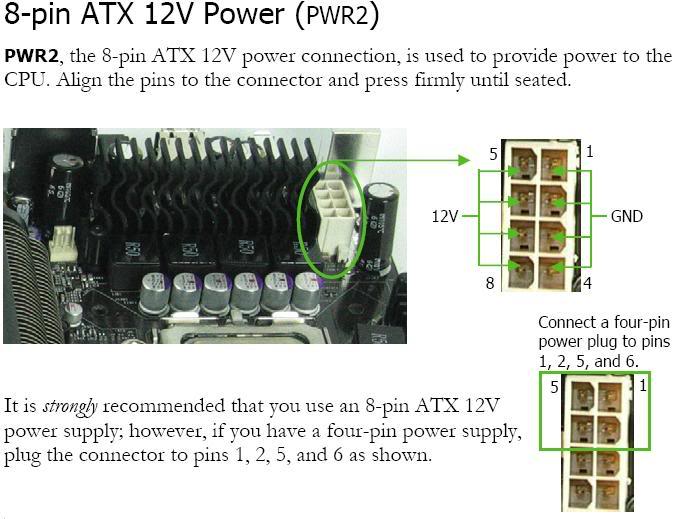 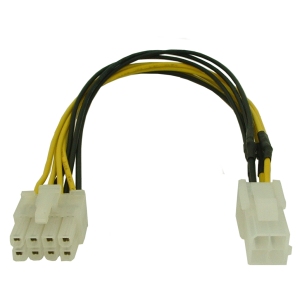 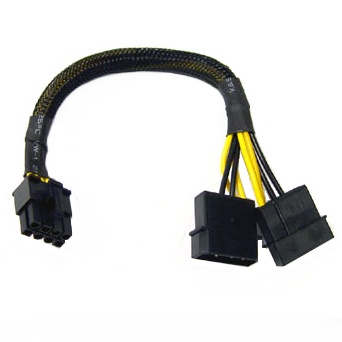 The documentation and specifications say no, but my bet is that it would almost certainly work. That connector only supplies +12V power to the CPU, and 2 pins (each way) at +12V should carry 120W without a problem.

It depends on the number of cores the CPU has. Assume each CPU takes a similar current. So 2 cores will take twice as much, and 4 cores, four times as much. If a single conductor was used for a multi core CPU, the total supply current to the CPU is now large enough to get hot. Not good. Best is to have 4 independent supply lines in parallel, each decoupled with capacitors. Belt and braces.

It also prevents interference over the supply line.

Not the answer you're looking for? Browse other questions tagged power-supply atx eps or ask your own question.

2
Is it possible (and safe/reliable/non-damaging) to use a 20-pin ATX PSU with a 24-pin ATX motherboard?
3
Can I use an ATX PSU, ATX case and MicroATX motherboard together?
5
compatibility with modern motherboards? (ATX 12V vs EPS 12V)
2
Installing a case fan: What to do when there's no spare 3-pin and no Molexes at all?
2
Can I plug a 8-pin EPS connector from the PSU to a 4-pin ATX motherboard?
0
Can I use this power supply with my motherboard
1
12v 8 pin EPS to 12v 8 Pin PCIe