AIDA64 is telling me that my CPU package temp gets to 125C. That is incredibly hot. My cpu core temps stay at ~31C though.

Should I be worried about a high package temp? What is a CPU package? Should I reapply my heat sink and thermal paste? 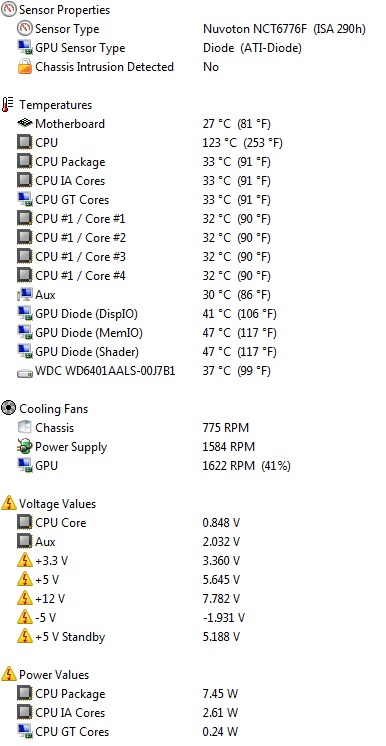 It sounds like you are getting a mis-matched label (the sun’s corona may be hotter than its surface, but the CPU’s package would not be hotter than its cores). Check all of the available temperatures and look at the ones in the normal range. There is often a reading that is bizarre (the one on my systems have usually been something like -50°C). The highest one is usually the CPU while the next highest is usually the system temp (ie, inside the case, or around the CPU, which is likely what is being called “package”).

If you can edit the labels, do so because due to variations in design (despite standards), monitoring programs can only label readings like temperatures and fan speeds based on statistical commonalities if they don’t have specific information. In other words, unless AIDA knows about what numbers are for what for your specific motherboard, it can only label them according to what they usually are (eg, Temp1=CPU, etc. even if that turns out not to be the case).

Also, watch the high temperature for a while to see if it fluctuates at all. Try doing something to increase CPU usage such as watching a Flash video or playing a 3D game. Does it go up or down? If it remains unchanged, what may be happening is that it is not an actual reading at all, but rather just a reported maximum value. In other words, what may be happening is that the CPU is reporting that the CPU package can tolerate up to 123°C, and some monitoring programs (like AIDA) are incorrectly reporting that as an actual reading.

You may want to cross-reference the values you see in AIDA with some other monitoring programs such as SpeedFan, Real Temp, HWiNFO, Core Temp, etc. Other programs may have better hardware databases and can correctly report it as a maximum supported temp. rather than a current temp.

I wouldn't believe the data you're getting. It's really not possible for the package to be that much hotter than the core. Think about it, the package can only get hot if the core heats it up. And if the package is still that hot, how did the core cool down?

Not the answer you're looking for? Browse other questions tagged cpu temperature or ask your own question.

7
Why is my motherboard temperature a constant arbitrary number?