Is There A Need To Safely Remove Device If “Quick Removal” Is Enabled?

i have been always ejecting devices from USB prior to removing them from computer and then i thought that if i have "Quick Removal" set, would i still need to eject? What could be the worst case if with this option i will remove device in the middle of it working?

I had times where Windows just refused removing device and stated that it is in use so i had to remove it "non-safely".

I heard cases where people had their device, USB thumbdrive in particular ceased working when removing it. Whether this pertains to removing safely or not safely i don't know. 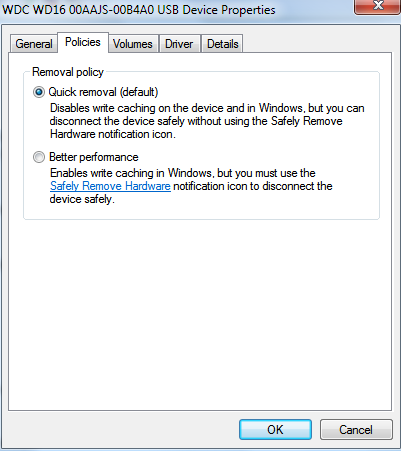 It's still necessary unless you can always make sure there are no unsaved changes to files on the drive.

"Quick removal" disables write caching so you can be sure that the file system won't be damaged due to important changes being delayed by the cache, but it can't magically make all programs automatically save every change to files on the drive as you make it. If you unplug the disk when there are open handles that was used for writing, depending on the parameters used when the handles are created, you may lose the entire unsaved file or the part that was still in the program's buffer.

In this sense, it's more useful of save often than using quick removal (as most decent programs will flush the cache when they save anyway).

If you select "Better performance", not only user data go through the device's cache, so will file system operations. If you unplug or suffer a power loss before a file system operation in the cache is written to the physical media, you get an inconsistent file system. Depending on how robust the FS is and whether it accounts for this situation, you may lose parts or whole of the file(s) involved in that FS operation or even the entire file system.

Some FS like NTFS uses a journal to record every FS operation before they are carried out, which basically eliminates file system integrity problems due to unsafe unplug or power loss.

However, most flash memory uses FAT which does not have a journal thus very susceptible to file system integrity problems. So it's always a good idea to remove a disk safely.

Not the answer you're looking for? Browse other questions tagged eject safely-remove-hardware or ask your own question.

97
What is the rationale behind safely removing USB media from windows PCs?
14
USB Stick, how to minimize risk of data corruption or data loss
0
Is it worth safely removing devices in Windows Vista and above

39
How to safely remove a device blocked by the System process with a handle on \$Extend\$RmMetadata\$Txf
8
“Safely Remove Hardware” icon in Windows 8
19
Why is Safely Remove Hardware so slow?
2
How to remove my usb device from safely remove hardware and eject list
4
I can't remove the usb flash-drive safely after succesfully backing up data with acronis true image
1
Drive can't be ejected the first time, despite “Quick removal” being enabled