Added: Last item that I could not gain (per-app) control of is "System Sounds" I do not know what executable or window to "talk to" to control this item.

On Windows 7, I'm still looking for a per-application adjustment of the focused program audio playback with control capability. Preferably it should have keyboard shortcuts.

Every time I still have to bring up Windows' oversized mixer panel, to "fix" the mess, to try and figure out what did and didn't work. There's no fully functional control of anything other than the Main volume, which is better than nothing.

At this point I am fed up with testing applications that are good ideas, but do not work in half the situations. I would even go for a way to shrink the present panel (like one could do in XP), or a replacement panel.

Instead of pointing me to more applications, tell me if you achieved what I need.

Expectations – What could I work with, by priority (for the Windows per-application mixer):

This is an idea of the programs, some worked, some worked then failed to work in the next scroll/click. The ones that need control:

Things that fill the mixer, even though I do not need sound in them:

Add to that, more programs that will use sound:

This picture shows the volume mixer when it is all accessable without having to scroll. it takes up 3/4 of one monitor.

If it seems like, why would there be all that running or in need of control? Because some are Players, and others are editors/converters. Listen to radio while editing, switch to watch a move while something is converting etc. Different things need to be turned down for a few minutes.

Volumouse seems to do what you want. But you will have to set it up. 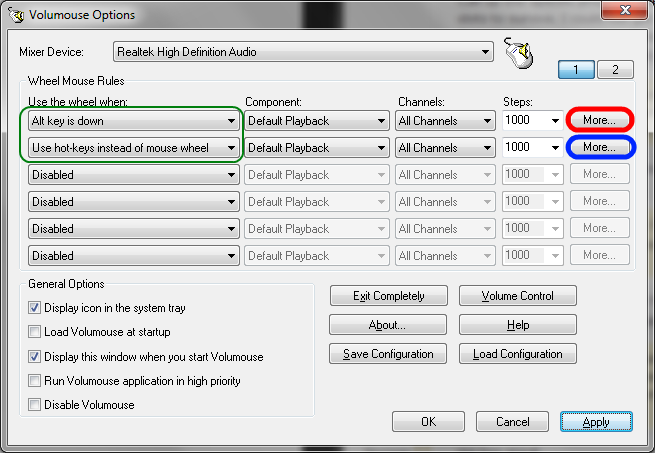 In my example setup, I click the More button of first slot and choose "Change the volume for application in focus" under Windows 7/Vista/2008 Options. 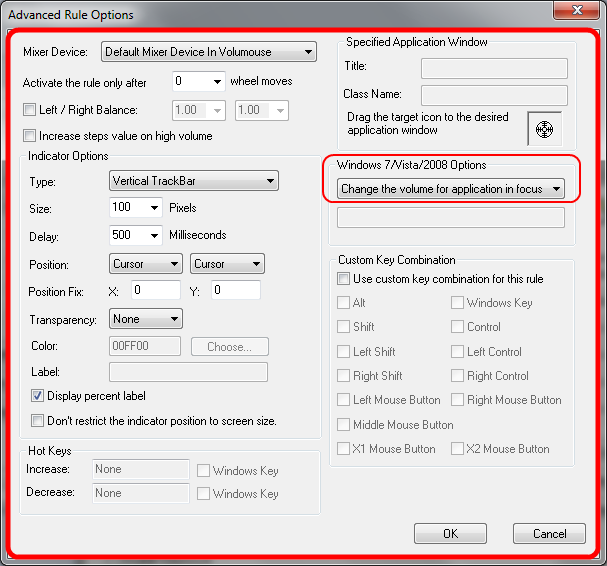 I can now hold Alt key and roll my mouse wheel to control volume of the window (focused) window. It works in Firefox, Opera, Steam and itself but fails in Chrome (probably because of the multiple processes). So I use slot 2 specifically for Chrome and I click the More button to set it up like this: 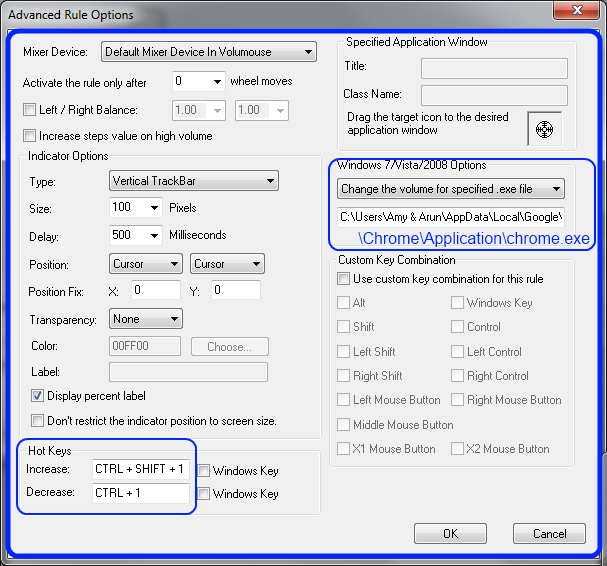 I also chose to use hot-keys (keyboard shortcuts) instead of mouse wheel to showcase that feature here. I can now control Chrome's volume using the keyboard shortcuts anywhere (no need to switch to Chrome first), another advantage of exe-specific volume control. Note that you don't need to specify full path, but it's safer to do so. You can also just specify the file name (chrome.exe).

Using Volumouse with keyboard shortcuts: Combining the settings "Use hot-keys instead of mouse wheel" (blue method) and "Change the volume for application in focus" (red method) worked better for Psycogeek as the hot-keys were functioning in applications where the mouse wheel didn't.

Another tip: If you want an easy way to bring up the standard Volume Mixer of Windows, you can create a shortcut to C:\Windows\System32\SndVol.exe and assign a keyboard shortcut in the shortcut's properties. Or you can pin it on the taskbar.

Another thing to note: When using a 64Bit system, volumouse is running 2 processes a 32bit and a 64bit. If your having problems with it controlling only 32bit or only 64bit programs, check to see if both 32&64 were installed and running.

As far as I know CheVolume is new to the scene and the only application as of this post that can change the audio output device per application.

There is a lengthy thread that began in 2009 of users seeking this ability, so it's been quite the ongoing request. The developer himself answered the thread a couple months ago.

I do not know if CheVolume supports hotkeys.

How does it work ?

CheVolume gives you power over your applications. You can transfer an open application from your headset to your speakers in a click (or any other audio device, USB, HDMI, etc.).

Hmmmm... YES ! This is the main goal of CheVolume !

Currently, only Chrome is supported. Firefox and Internet Explorer will be supported on a next update.

Does it work with my games?

Yes ! But some games need to be restarted (or mute/unmute) so the transfer can take place.

If I have a dual-screen, can i have a game on one screen in my headset, and a movie on the other screen, with the sound on the speakers so my girlfriend can watch it? 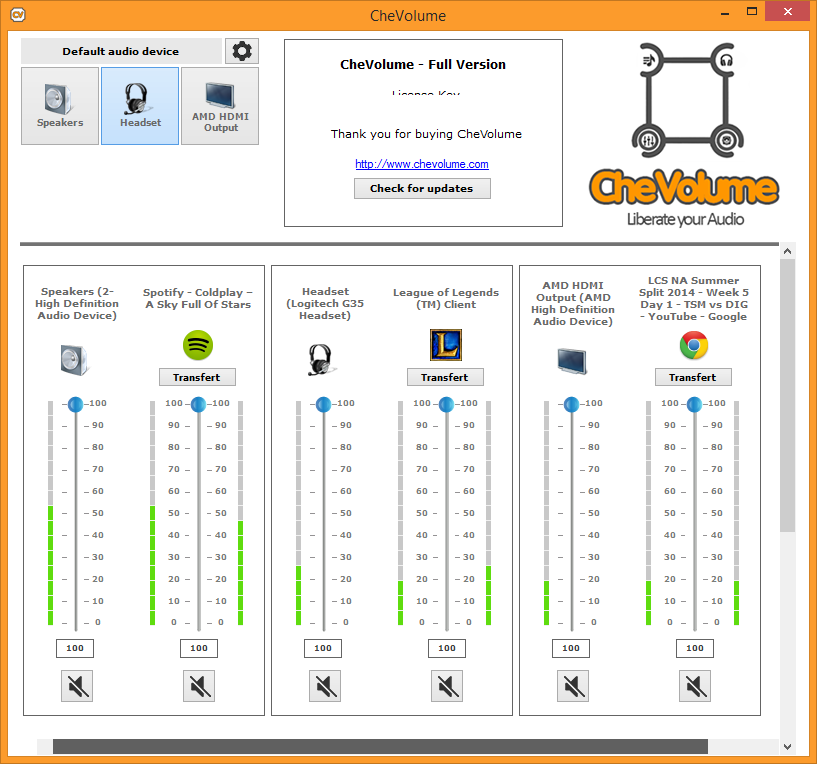 Another application that is not in your list is Virtual Audio Cable :

It creates a set of virtual audio devices named "Virtual Cables", each of them consists of a pair of the waveform input/output devices. Any application can send audio stream to an output side of a cable, and any other application can receive this stream from an input side. All transfers are made digitally, providing NO sound quality loss (a bitperfect streaming).

Not the answer you're looking for? Browse other questions tagged windows-7 64-bit audio mixer or ask your own question.

8
Reducing volume of an audio device on windows 7
7
Per-application sound balance in Windows 7
2
How can I turn my keyboards NumPad into an Audio mixer in windows 7?
8
Where did the volume control options go in Windows 7?
2
Can't control volume for bluetooth headset on Windows
0
How to control Creative audio card from Windows mixer?
2
Volume control per audio device on Windows
0
Issue with windows 10 audio driver