What types of Ethernet cables are there?

There seems to be various type of Ethernet cable: Category 3, 4, 5, 5e UTP cable, Ethernet over twisted pair, RJ45, 100Base-Tx. I cannot tell the difference among these ethernet cable, and I do not know where to use which. What are they and what are their differences?

UTP (Unshielded Twisted Pair -- Similar to a phone line) is what we use today, The different categories of UTP usually represent how much data (bandwidth) it can handle per unit time (basically a measure of quality). I'm almost positive RJ45 is what the connector is called for standard UTP cat 5 and 6. 100Base-Tx, I think mean 100mb/s speed, baseband, and UTP wire. 100Base-Tx, is a standard for networks. It implies what kind of category wiring can be used. Baseband refers to how data is transfered over the wire. There is baseband (which transfers one signal at a time), and broadband (like cable television -- that transfers many)

Twisted pair refers to how the wires are paired inside the cable, exclusive of everything else related to them. 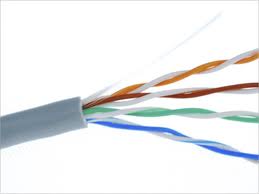 Referring to the comment below, such as getting the wire in straight form, this has different meaning. This has to do with how the ends of the wires are connected to the plug (RJ45). Depending on whether you are connecting two computers together (you would use a cross over cable) or a computer to a networking device (standard cable). Everything about the wire, as far as I know, is the same, except for how the wires are connected to the plug.

Short Answer:
If you have 4 pairs (8 conductors) of Cat5 UTP copper correctly wired into an RJ-45 connector, you can handle 10/100/1000 mbit Ethernet just fine. Cat5e is better than Cat5, and Cat6 and 6a are better than that. Better quality cable can sometimes make up for mistakes in how you put your cabling system together, so consider paying for Cat6 or Cat6a cable if it doesn't cost too much more.

Long Answer:
The 3 most common flavors of Ethernet by far are 10BASE-T (10 mbit Ethernet), 100BASE-TX (100 mbit "Fast" Ethernet), and 1000BASE-T ("GigE" Gigabit Ethernet). These all use Unshielded Twisted Pair (UTP) copper cabling, via what are commonly called "RJ-45" connectors, but should technically be called "8P8C" (8 position, 8 conductor) connectors.

1000BASE-T required Cat5 just like 100BASE-TX, but it required 4 pairs. Just like 10BASE-T and 100BASE-TX, 1 & 2 were a twisted pair, and 3 & 6 were a twisted pair, but now 4 & 5 needed to be connected to a twisted pair, and 7 & 8 needed to be connected to a twisted pair. Just like 10BASE-T and 100BASE-TX, it was designed to work over runs of up to 100 meters in length. Note: Even though the IEEE spec is quite clear that Fast Ethernet and Gigabit Ethernet are designed to work over plain old Cat5, a lot of people will tell you they require Cat5e or better, which is not true. The superior qualities of Cat5e might make up for other common mistakes in the design and implementation of the structured cabling system in your building, but Cat5e is not strictly necessary.

Solid vs. Stranded: The copper conductors inside the cable can either be solid wires, or a bundle of wire strands. Solid conductors conduct better, but are stiffer and more likely to break if flexed or kinked a lot. So they're better for "in the walls" wiring that doesn't get messed with much. Stranded cables don't conduct as well, but they're more flexible and don't break as easily, so they're better for patch cables, including the cables that connect devices in an office to the wall jack. If making your own cables, make sure you buy RJ-45 connectors with the right style of sheath-penetrating teeth for your conductor type.

Plenum rated: If the cables are going to go in an air-handling space, such as above a dropped ceiling or below a raised floor, plenum-rated cables have sheaths made out of plastic formulas that don't put off much smoke or not so toxic smoke when burned, for the sake of fire safety.

It might be helpful to read the wikipedia article, which i have heavily referenced in my answer. The common types of ethernet cables used today are for ethernet over twisted pair, though there are other types such as ethernet over coax and optical fiber.

Basically the cables inside an Base T ethernet cable, specifically 8 pairs are twisted to reduce interference. The proper name for a common ethernet connector (there's older types not used as much) is a 8P8C connector.

The common types of cable used are cat 5 (for fast ethernet - at up to 100Mbit/s) which was superseded by cat 5e which is unshielded, and cat-6 for gigabit ethernet which is shielded.

If you're laying/buying cable in bulk there's also plenium and riser cable - the former is meant to be run between floors and produces less smoke should it catch fire, and the latter is for other runs.

4
How to properly connect shielded twisted pair cables for Ethernet use?
2
Which has greater bandwidth a STP or a coaxial?
0
How should my CAT6e cable be terminated? No pairs?
5
When does ethernet cabling need to be shielded?
3
Why are USB connectors different from RJ45/Ethernet connectors?
13
The characteristic AWG stands for American Wire Gauge but what's its importance in networking?
0
Ethernet Cable with red and yellow wires
1
How to use a two pair cable for internet