How important is it to keep an LCD computer monitor well-ventilated?

How important is it to keep an LCD computer monitor well-ventilated?

I built a DIY arcade cabinet for a video game that I programmed, and this cabinet will house an 18" LCD computer monitor inside of it. It's a tabletop cabinet made of birch plywood, about 2' by 3', and about 1.5' tall. The whole thing is covered by an acrylic sheet (Plexiglass). You can see a picture of the cabinet here (Plexiglass not pictured): 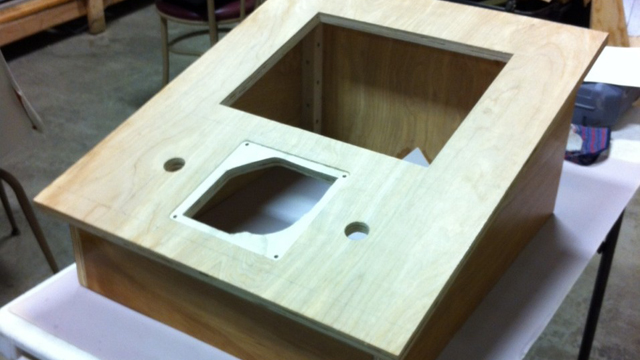 There's a small notch in the back wall for monitor cables (pictured), but other than that, there are no holes in the cabinet. It's a fully enclosed unit.

Should I be worried about keeping an LCD monitor enclosed inside of this cabinet? The monitor has vents on the top and sides, so clearly ventilation is important to some degree. There's a fair amount of empty space in the cabinet (and the aforementioned notch in the back wall for minimal heat exhaust), but should I still worry about the monitor overheating? How much heat does a typical LCD monitor generate, and, in an enclosed space, is there a risk of damaging the monitor if it overheats? What other symptoms might an overheated monitor produce?

To address your concerns, you must provide cross-ventilation.

The 'notch' cannot help without a corresponding vent, preferably on the opposite side or both of the other two sides.

In order to cool the space behind the monitor, you need circulation, which will be possible only with cross-ventilation (cool air inlet, hot air outlet).

There's no "typical" here, alas. But I would volunteer that any remotely recent 18" LCD will consume less than 30W. For example, this http://support.dell.com/support/edocs/MONITORS/D1901N/user%20guide/English.pdf 18.5" Dell is 25W.

LED lifetime is reduced by a large ammount when leds are overheated. 8 hours at 10-15 events would be nothing for many of the LED based displays. Look up data on led "junction temperatures" . Most modern LED monitors use many many tiny phosphor based leds, and the ammount of heat generated, and junction temps of the leds stay lower. So although LEDs themselves would be most effected by contained heat, there would be way less contained heat, and less time.

CCT based is not effected by heat as much , but CCT displays get hotter than many LED displays. The CCT tube stuff is not effected by heat that much, but the additional overall heat of a CCT type of monitor might be worse than a LED when it comes to heating other components. The CCT high voltage converter being one of the components that can break down. CCTs might just be hotter more of the time , just because it is more often existing in older less efficient models. (I still prefer a CCT over LED)

The LCD pannel will survive fine, until it is left/put in direct sun, or put next to a space heater :-) or the conditions are not good for any electronics requiring cooling. any of the internal electronics can fail when not allowed to cool.

My information is based on loose tests of 30-40 monitors in the store, there is always a monitor of either type that puts out Way more heat. Examples of specific monitors that do use more power (more waste), are the ones with additional curcuits conversions and connection, built in high powered audio amps, and other items beyond digital display of one computer. Pip, 3d display engines (tv), analog inputs , tv tuner inputs, other special purpose monitors, even when those curcuits are not in active use.

When selecting the monitor , just get a modern one that uses low power, and feels cooler when running, and you will be "ok". get one that is simple, has few extra power sucking features, most likly get one that is led based. Or just put a small fan and air flow in , and finish it right. The Least, it would have to have some air holes in it, a design plan for convection heat flow. Even small ammounts of heat in insulated containment without any where to go, will eventually heat things up and 8 hours it long enough.

You have this Facing up?, into any ceiling lighting or white ceiling tiles, or arc lighting, that might be at an event, there are few monitors that put out enough total backlight, to give a good display contrasting to the lighting reflecting off the display, or general overall lighting at a location. That might become a huge issue too, unless the Location is designed for that.

Overheating should not be an issue, as long as the monitor does not draw too much power. Most modern LCDs don't use much power. I have an Acer 19-inch LCD that typically doesn't use more than 15 watts and never drew more than about 20 watts of power (as measured by my Kill-A-Watt meter). It also stayed very cool: after several hours of continuous operation, the back of the monitor gets only slightly warm.

If the monitor draws much more power than this, you may want to install a cooling fan into the enclosure, since overheating could cause the inverter or backlight to fail. Otherwise, you don't need to worry about overheating.

Edit: Given the power consumption of your monitor, additional ventilation is probably necessary; you'll want to cut an additional hole into the back of the enclosure to install a cooling fan facing out. Air will enter from the monitor cable hole, which should be enlarged slightly for better airflow.

In general, thermal conductivity of a wood is weak. Thus, issues are possible with large or old panels, that consumes 100+ watts. If you're going to use quite small or modern panel that consumes only 20-30 watts you'll be ok.

4
Artifacts on LCD monitor?
1
Criteria for rating LCD monitor quality
4
Is there a way to determine if my PC is killing my monitors that doesn't involve killing another monitor?
0
LCD monitor flickering
4
LCD monitor got wet
1
LCD monitor/TV switching modes automatically
0
Transporting a desktop computer and LCD monitor
0
Can my lcd monitor be fixed?