How can I force Thunderbird to reload IMAP folder structure

Whenever I create a new label in my Gmail account, this creates a new IMAP folder. Sadly, that new folder does not show up in Thunderbird unless I restart Thunderbird.

This is not specific to Gmail. When I create a new IMAP folder on my own server, the result is the same.

To clarify. Here is what I'm doing. First, I create a new label in Gmail:

But now it won't show up in my Thunderbird folder tree. Even though it knows about the folder and it is subscribed to: 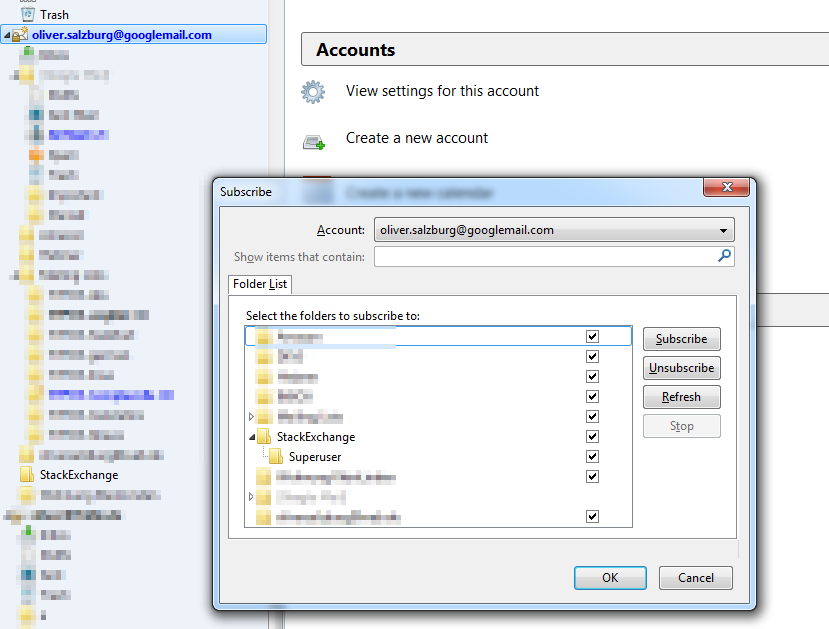 When I restart Thunderbird, the folder shows up just fine. I would like it to show up without restarting Thunderbird.

You should get a screen of options, find Manage folder subscriptions and click on it

I think in that website you can find more useful information about Gmail x Thunderbird. Also, I found out in other forum the following:

Thunderbird refreshes the folder list when it connects to the server, in particular, at startup. You can force a refresh of the folder list any time by collapsing and re-expanding it.

If you uncheck Tools » Account Settings » Settings » Advanced » Show only subscribed folders, it will display all folders.

I know this is a old thread. But this seems to work:

The open and close, settings come into effect.

Hope it helps someone else.

(Somewhat) surprisingly, in 2015, with Thunderbird 38.2.0, forcing Thunderbird to refresh the IMAP folder tree after adding a new directory/folder is still necessary.

I'm amazed that the answer is exactly as Randy Orrison described and Oliver Salzburg confirmed, above, over 3.5 years ago: How can I force Thunderbird to reload IMAP folder structure

Every time I tried it, I was already subscribed to the new folder. So that wasn't the problem. What actually made the difference was collapsing and expanding the tree. Thanks ;)

I had quit and relaunched Thunderbird, double-checked that I had subscribed to the IMAP folder in question, subscribed/unsubscribed, quit and relaunched again... nothing forced the new directory to be displayed — until I twirled-up and twirled-down the little arrow immediately to the left of the Inbox (in the folder pane panel). As soon as I did that, the new directory appeared!

Thanks to everyone who contributed to this most frustrating problem's resolution! Full credit to Randy Orrison for the original solution.

Who's game for opening a bug report (or citing an existing report)?

As none of the proposed solutions worked for me to get the disappeared subfolder to show in the sidebar on the left, I had to try something else. For me the folder was suggested on right click as a folder to put mails, but I had to create specific filters in the search field to view the folder, because it didn't show up in the sidebar.

My solution was to permanently rename the folder - for some reason it disappeared again if I renamed it back to the original name.

So Thunderbird 68.8.0 and possibly others

Find the "Hidden menu with the advanced configurations".

In my installation it lives in Preferences, General, Config Editor.

You need to "accept the risk".

Actually don't know which of these two options is the one or if both must be selected. In some recent version, you can maybe change this elsewhere, but not in my instance.

This was driving me nuts and none of the previous answers worked for me. Following the advice to check/refresh the folder subscription settings would only show the new folder in the subscription dialogue — and even then not indicating that it has subfolders, which it has. Still, after countless restarts of TB, frantic reloading of the folder structure by collapsing and expanding the folder tree on all levels, the new folder and its subfolders wouldn't show up in the account pane. Host is all-inkl.com, where I couldn't find any settings to show/hide folders from mail clients.

So if anyone stumbles upon the same problem, here's what fixed it for me:

It seems that the mechanisms and tricks of folder synchronisation has changed a lot since the OP. I could not follow the instructions given in many of the other answers. The following worked for me in 2022 (v91.7.0). Actually it is quite similar to the post of 10 years ago. 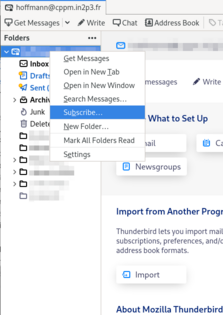 The list should be updated now. If newly added folders are big, it may take some time to synchronise their contents though.

I'm a Linux/ LXLE user using Thunderbird with an Outlook account. What worked for me was to do two things:

I removed my email account from Thunderbird and closed the program.

The second thing I did may not have any effect on the result. However, I:

2) Went into Synaptic and completely removed the Thunderbird package then reinstalled it.

A few seconds later the missing files and folder tree were restored from the remote servers.

Try step one on its own and see.

Not the answer you're looking for? Browse other questions tagged thunderbird imap or ask your own question.

6
Convert a Gmail account from POP to IMAP and keep folder structure?

0
Thunderbird 3 via GMail IMAP to Google Groups: sent items do not show up
4
Can I configure Thunderbird 3 to refresh the folder list for an Exchange IMAP account?
4
How to get rid of Thunderbird error "[NONEXISTENT] Unknown Mailbox: Trash"
12
How do I copy a large number of emails to an IMAP folder in Thunderbird?
1
Imap server woes with Android Gingerbread email and Thunderbird
33
Outlook With GMail Over IMAP is Missing All Mail Folder
0
Thunderbird folder layout and/or namespaces for gmail
3
Thunderbird not syncing junk folder / not showing unread junk emails
2
gmail, IMAP, Thunderbird: Why is email delivered to All Mail, but not Inbox?