Apologies for the very long post, I have posted this on the VirtualBox forums but the activity seems to be quite low and no responses yet so if I may, please bear with me here.

I use VirtualBox on my laptop, set up with dual boot Windows 7 and Arch Linux. I have a "data" partition for large files and stuff. Here's what my hard drive looks like in Disk Utility (linux): 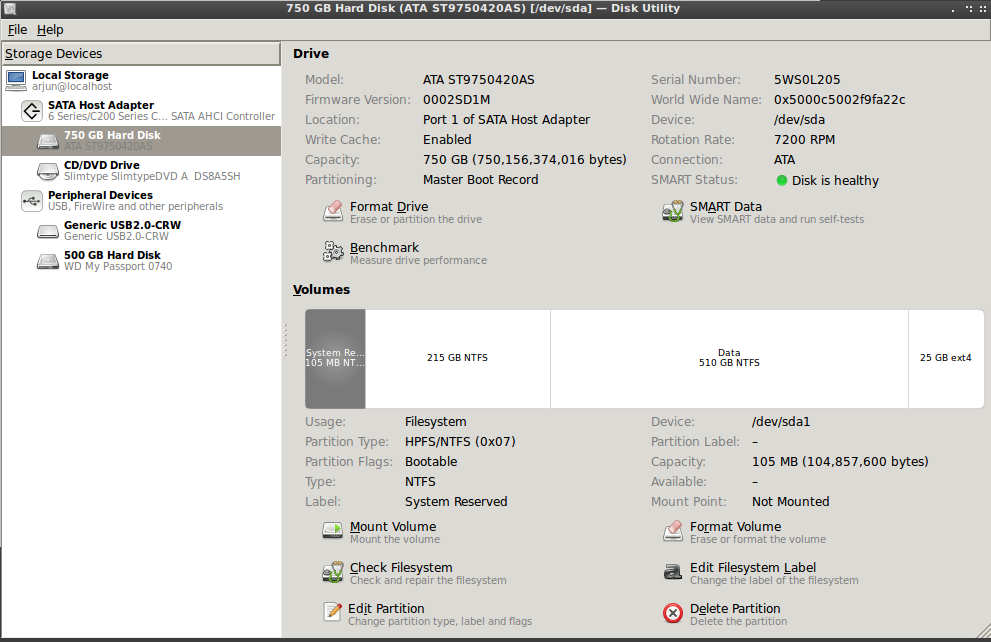 VirtualBox is installed on both OS's, I keep all my VDI files on the Data partition and point VirtualBox to those VDI files. I have only two virtual machines; a Windows XP and a CentOS machine. I actually have 2 copies of the Windows XP VDI, one for accessing from Windows 7 the other from Linux.

Everything was running fine until yesterday. I booted up my CentOS VM from Linux host only to find that it was crawling along at an unbelievably slow pace. It takes > 5m to boot up as opposed to the normal 30s or so. All operations on the machine are slow aswell, even just moving the mouse is laggy.

I was completely confused. I'd established that the VDI file was not corrupt by creating a completely new one and experiencing the same slowness. I'd eliminated a potential host OS issue because it had the same performance from the Windows host.

The only thing I could think of was that my Data drive was somehow corrupt. So I then tried to prove this, by loading up my Windows XP VM from both Linux and Windows host (remember that the Windows vdi file is on the same partition). Oddly, it was absolutely fine and unchanged.

Next thought - a corrupt CentOS download which somehow has ruined itself sitting on my CD. Test: boot up laptop with LiveCD I used before. Result: no problem at all, totally smooth.

[Scratches head for about half an hour]

I have pasted the output of the log file for running CentOS from ArchLinux here. I would really really appreciate some help and am more than happy to provide any more information if this wasn't enough, although I'm sure my waffling has gone on long enough already...

I found the problem, VirtualBox had for some reason reset my VM to 32-bit whereas my .vdi was of a 64-bit OS.

To fix this you need to:

You do not need to:

Change the chipset under System->Motherboard in the settings of your virtual machine to ICH9. The Intel chipset works correctly for Red Hat and its kids. CentOS 6.2 was running like a complete dog until I realized what the problem was. Now runs near real time like it should.

at my virtualbox setup (ubuntu 13.04 as host, debian 7 as guest) I changed to ICH9 and increased video memory to 129MB and enabled 3D graphic acceleration and debian now runs smoothly.

Not yet checked if only the video RAM increase would have sufficed.

If you see “Not software rendered” and “Unity 3D supported” both say no. This means Unity is using slow LLVMpipe.

To enable 3D supported, fist you will need to update linux-headers

Add “vboxvideo” at the end of the file

Not the answer you're looking for? Browse other questions tagged virtualbox or ask your own question.